You are here: Home / Politics / America / Dog Whistles Are So Passé: The President and His Campaign Have Gone To the Bullhorns To Message To His Base 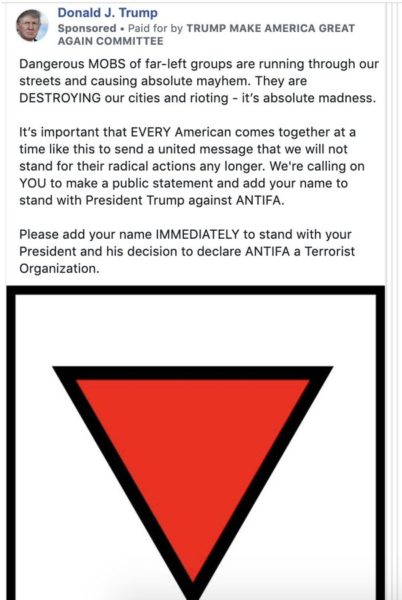 This is not an Antifa symbol. It is the symbol the NAZIs made political prisoners wear. Here’s the symbology classification system as explained by the US Holocaust Museum Encyclopedia Holocaust: 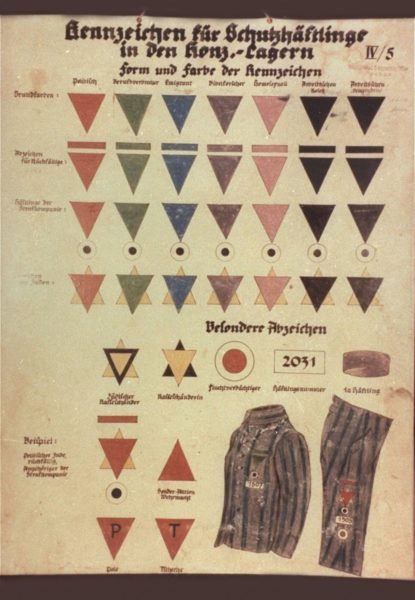 Here’s the new America First T-Shirt being offered for sale by the President’s campaign store: 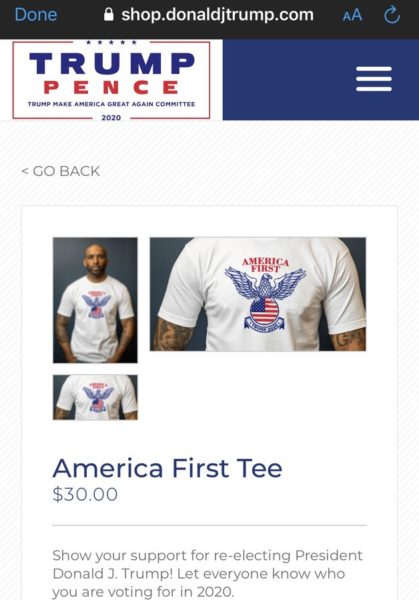 Here’s a better screen grab of the logo: 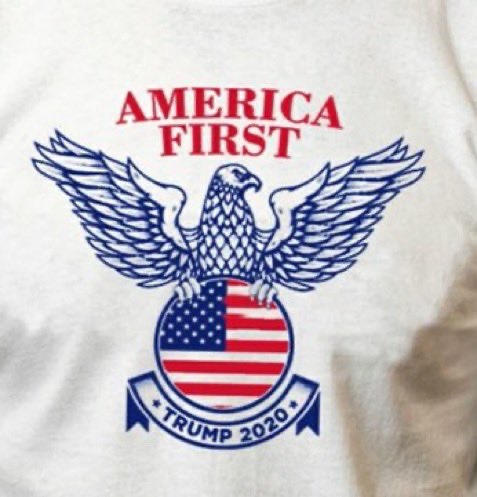 And this is the partieadler, or (NAZI) party eagle and its description from the Anti-Defamation League’s (ADL) website: 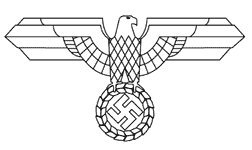 The Nazi Eagle is a symbol developed originally by the Nazi Party in Germany in the 1920s (also becoming a symbol of the German government after the Nazis took power), based loosely on traditional German coats of arms. Following World War II, the symbol was appropriated by neo-Nazis and other white supremacists worldwide, with many variations. The symbol originally featured an eagle clutching a swastika, but many variations replace the swastika with some other hate symbol, such as SS bolts or a Celtic Cross. Occasionally, extremists will leave the circle blank where the swastika normally would appear; this seems to be more common in countries where the swastika is prohibited.

It should be noted that eagles are a common symbol among nations worldwide, including the United States, and not every image of an eagle is derivative of the Nazi eagle. It is not uncommon, for example, for some Americans to mistake the Blue Eagle logo of the Roosevelt-era National Recovery Administration for a Nazi-derived symbol.

Here’s the National Recover Administration’s crest so you can see for yourself that it looks nothing like the parteiadler or the logo on the America First T-shirts. 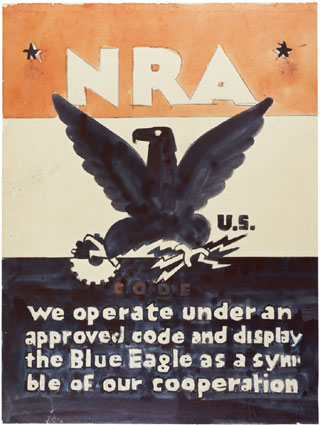 But it isn’t just the imagery. The Trump Make America Great Committee purchased 88 Facebook ads that used the NAZI symbols for political prisoners in the screen grab at the top of the post. 88 is the code that neo-NAZIs and white supremacists use for Heil Hitler. Recently the President, in defending monuments and statues to Confederate military leaders and personnel, tweeted out this 14 word tweet, which included two words with capitalized “H”s right next to each other:

This is a battle to save the Heritage, History, and Greatness of our Country! #MAGA2020

The 14 words is the most popular white supremacist slogan and statement. From the ADL:

“14 Words” is a reference to the most popular white supremacist slogan in the world: “We must secure the existence of our people and a future for white children.” The slogan was coined by David Lane, a member of the white supremacist terrorist group known as The Order (Lane died in prison in 2007). The term reflects the primary white supremacist worldview in the late 20th and early 21st centuries: that unless immediate action is taken, the white race is doomed to extinction by an alleged “rising tide of color” purportedly controlled and manipulated by Jews.

Because of its widespread popularity, white supremacists reference this slogan constantly, in its full form as well as in abbreviated versions such as “14 Words”, “Fourteen Words,” or simply the number “14.”

A sober person would say that this is just a coincidence. That argument would have more validity if the President and his campaign and his administration did not have a history of using this type of symbolism. One of the President’s 2016 campaign ads, in July of 2016, was a picture of Secretary Clinton’s face and a Star of David (six pointed star/Jewish star) imposed over piles of cash. Which he tweeted! Another of his campaign’s final ads during the 2016 election included the faces of then Federal Reserve Chair Janet Yellen, Goldman Sachs CEO Lloyd Blankfein, and Holocaust survivor, billionaire, philanthropist George Soros as exemplars of corruption.

The use of this imagery is not an accident. Without having to actually go looking for them, including the T-shirt the President’s campaign just made available for purchase, I was able to come up with a number of examples using clearly anti-Semitic imagery and language. But it goes beyond these campaign ads, merchandise, and tweets by the President. For instance, the initial number of children that HHS was reporting had been lost in the system after being separated at the border was 1,488. This amount of coincidence takes a lot of work!

The dog whistle is clearly passé. Why whisper when you can scream!