You are here: Home / Open Threads / Kitchen Renovation – Narya – In The Before Times

About that kitchen renovation we keep hearing about… Narya takes us through it with her. 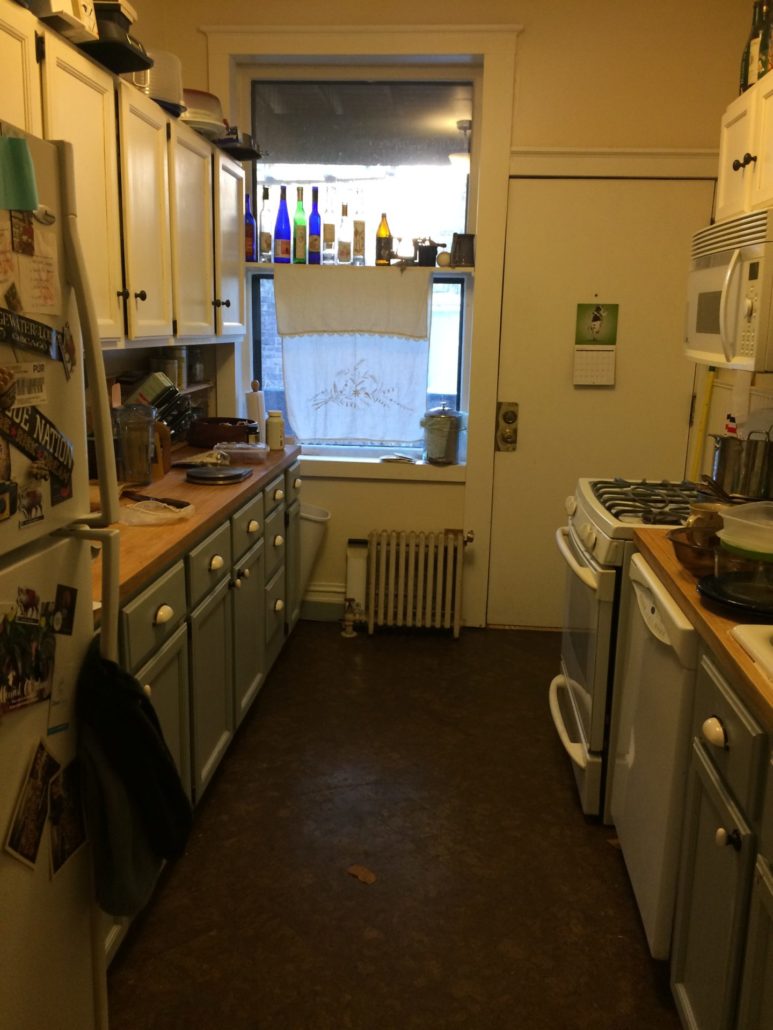 So this is what the kitchen looked like to start.

The things that weren’t very functional included the cabinets, which did not go to the ceiling (meaning there were opportunities for stuff on top to collect crud) and which were kind of . . . janky. They weren’t very well-constructed, so they disintegrated with use, and all of the handles and pulls had scrollwork and crevices. I went to pastry school 15 years ago (though I only earned my living that way for two years), and I still bake a lot, and crevices collect flour. It was basically impossible to get the cabinets clean.

It was basically impossible to get the cabinets clean. Second, though you can’t see it here, the backsplash for the whole kitchen was beadboard, which is possibly the most dysfunctional choice ever for areas that get splashed and floured regularly; it was not possible to clean it.

The dishwasher never worked all that well, so I hadn’t used in in 8 or 9 years. The sink is just out of sight, but you can see that it’s not an undermount, AND that counter was butcher block, so it was slowly rotting, especially as the faucet started to leak. The window only stayed open if you propped it open. The cork tile was hard to clean (and hard to tell when it was dirty), and just darkened the whole space.

However, I loved the long butcher block counter (and have kept that), and the basic layout is actually functional; I did not want to move plumbing or gas. What finally pushed this project onto the Do It Now list is that the oven failed in late January. I did not want to repair something I intended to replace, and I’ve been saving up for this for years, and the faucet leak was getting worse, and the fridge was starting to make noises, so . . . it was time. 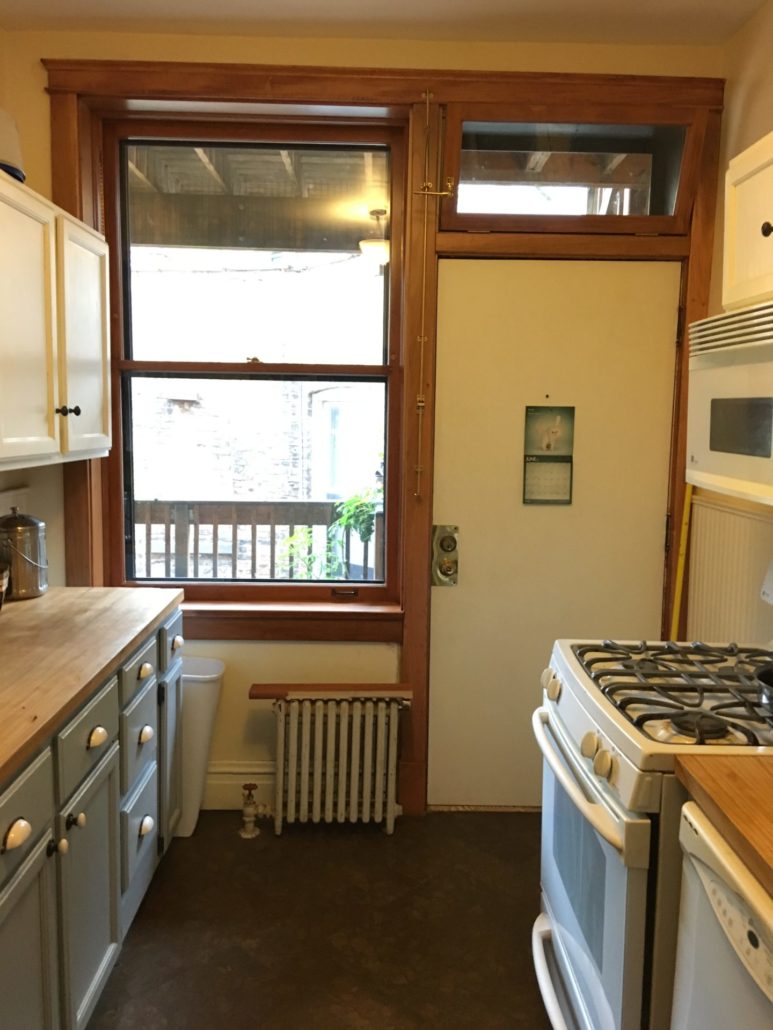 I did the window two years ago: I had the whole thing rehung and refinished, and I had them reinstall a transom. (That made an unbelievable difference in the summer. I don’t use air conditioning, and the transom dropped the summer temps in there by 10 degrees or more.) I did the window project separately; I knew it needed to be done, and I’d found someone who specialized in restoring windows in old buildings.

Historical note: the area closest to the window actually had a doorway in that wall, to a butler’s pantry. All owners in the building save one have walled that off so that the pantry area is now part of the back/second bedroom (what would have been the maid’s room when the building was built). There was also a doorway directly into the maid’s room where the fridge now is, so the maid could be segregated from the dining room. That bedroom also has the spot where the ice came in; I now have a built-in (and cedar-lined) closet there, and I found maple flooring from the butler’s pantry when I tore up the rug.

That bedroom also has the spot where the ice came in; I now have a built-in (and cedar-lined) closet there, and I found maple flooring from the butler’s pantry when I tore up the rug. 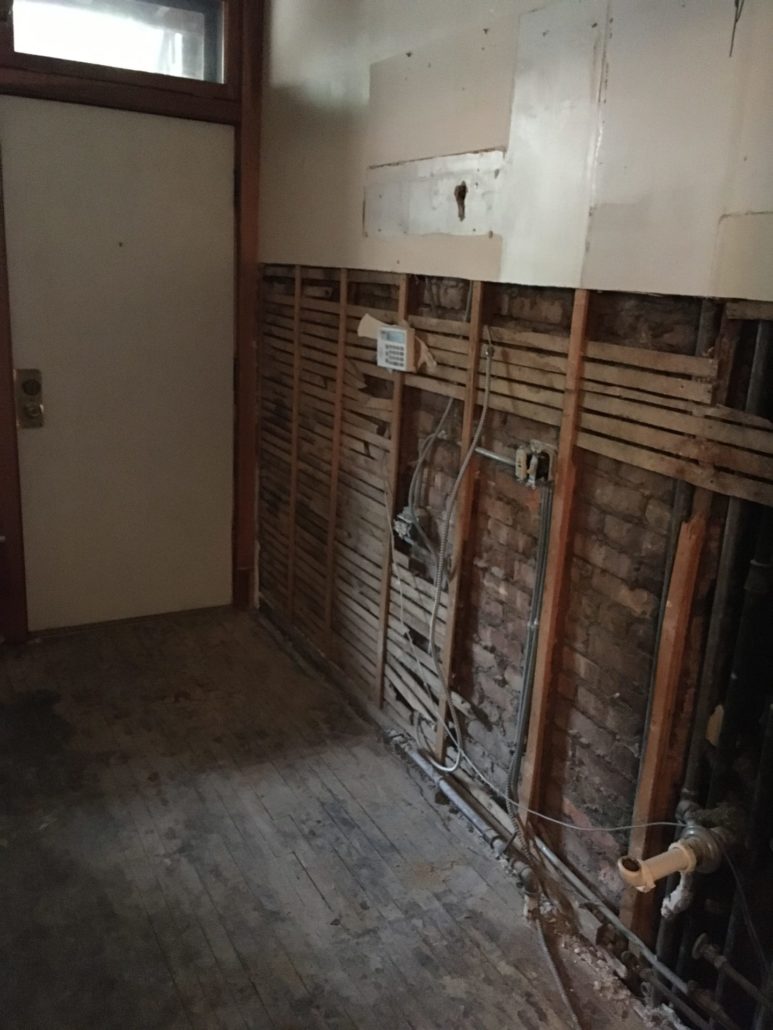 This is the gutted kitchen, down to the lath and masonry. We got lucky here: there wasn’t any of the original plaster still in place, so it didn’t have to be removed or replaced.

Messy electrical gets cleaned up 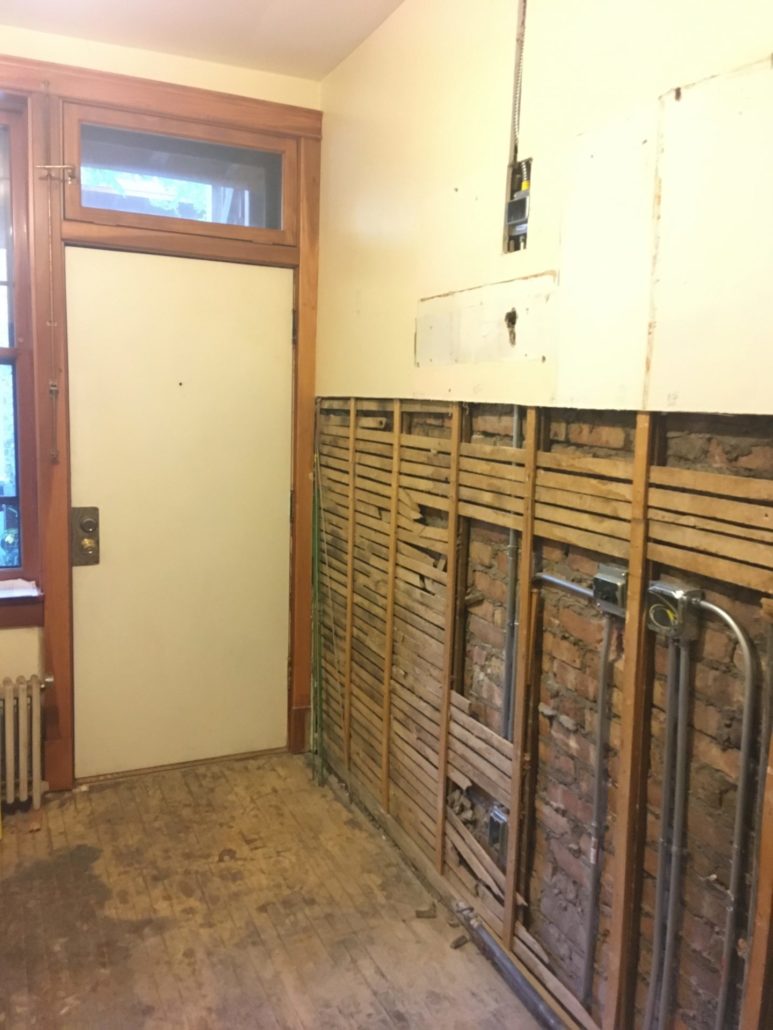 Here you can see how the electrician (the contractor’s son, actually) cleaned up the old wires and conduit he found. There was a disturbingly impressive amount of stuff like that in the walls. 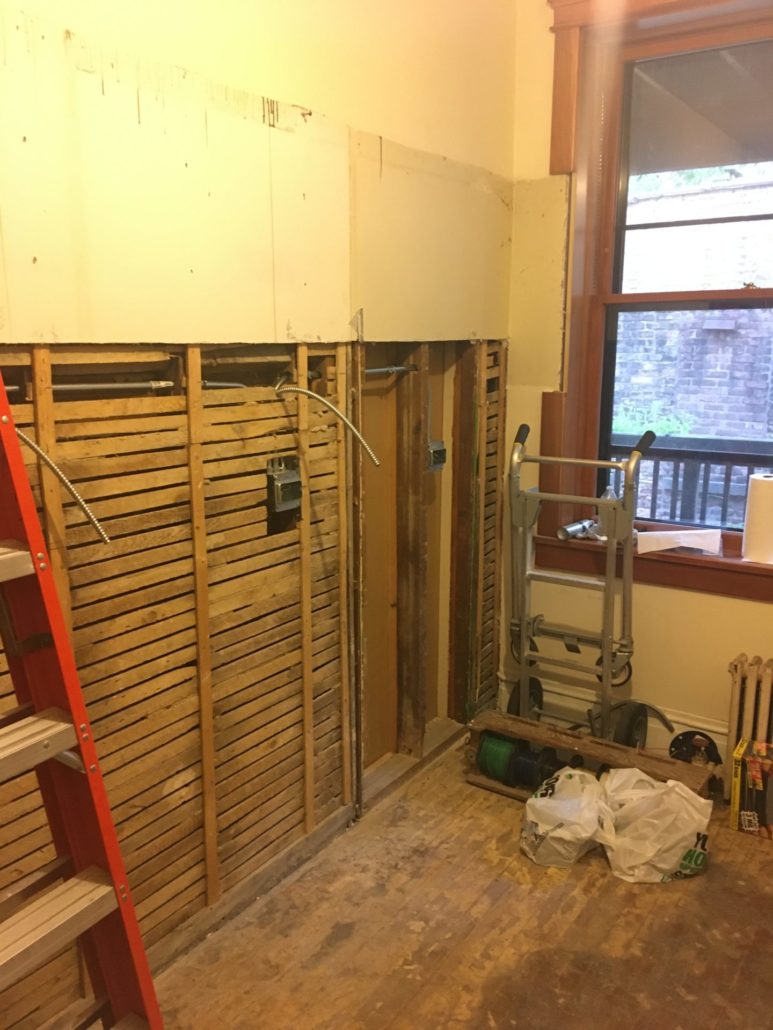 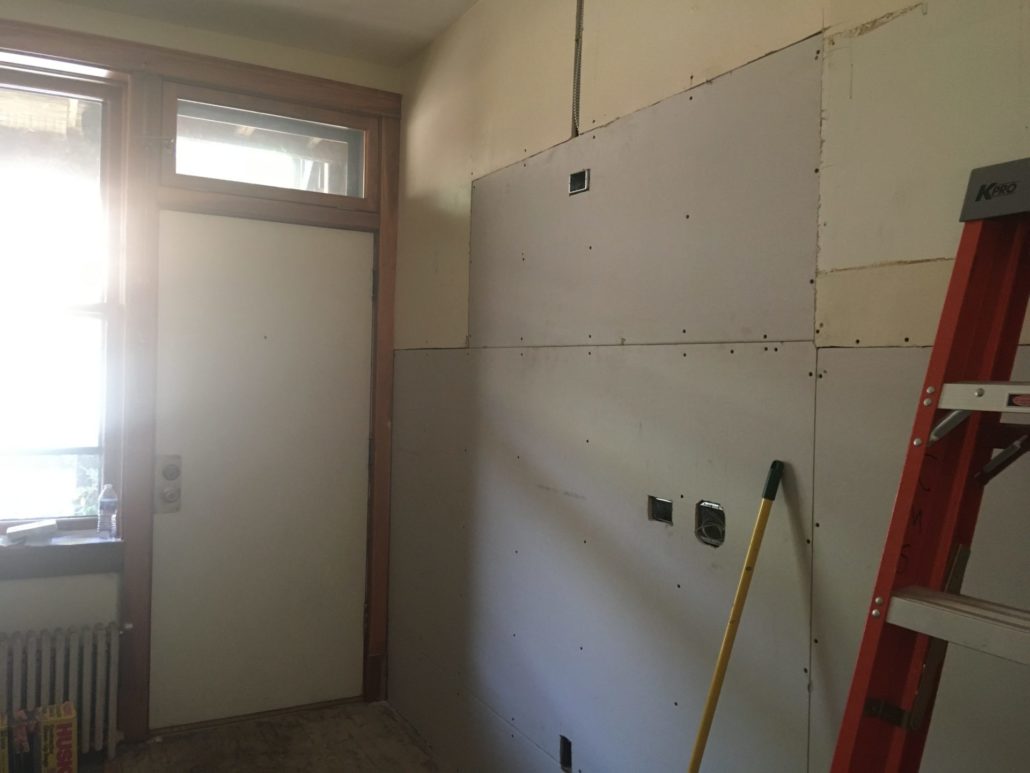 Here are the walls—just sheetrock. The electric isn’t done yet, but all of the boxes and conduit are in place. 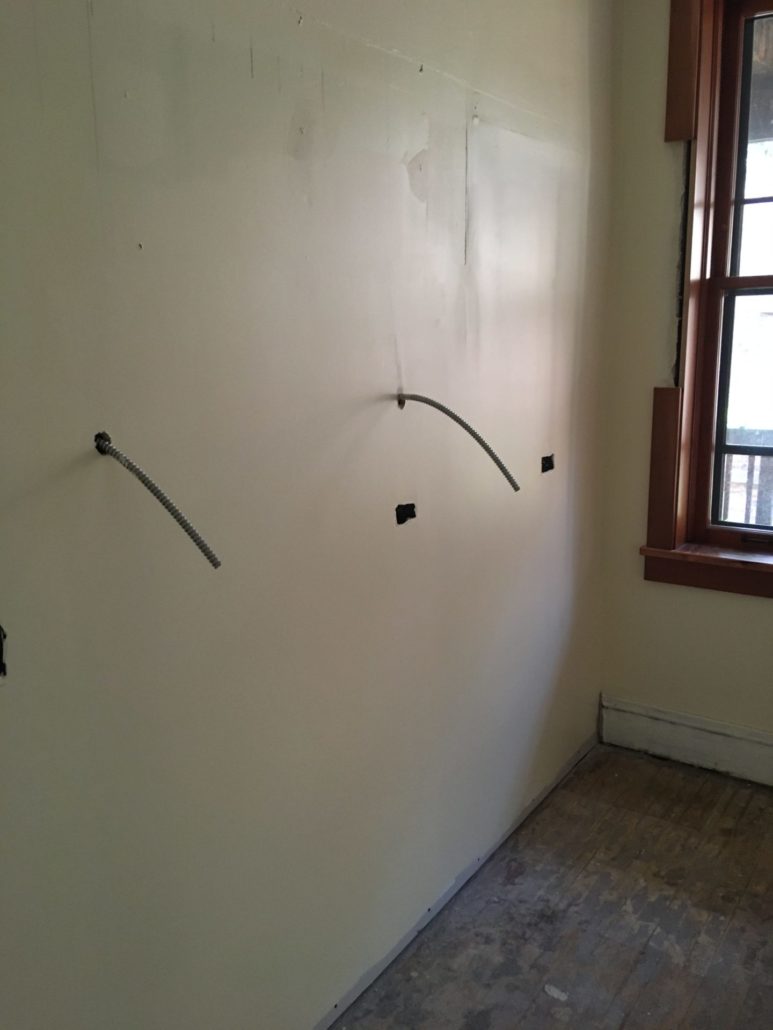 And a beautiful maple floor! 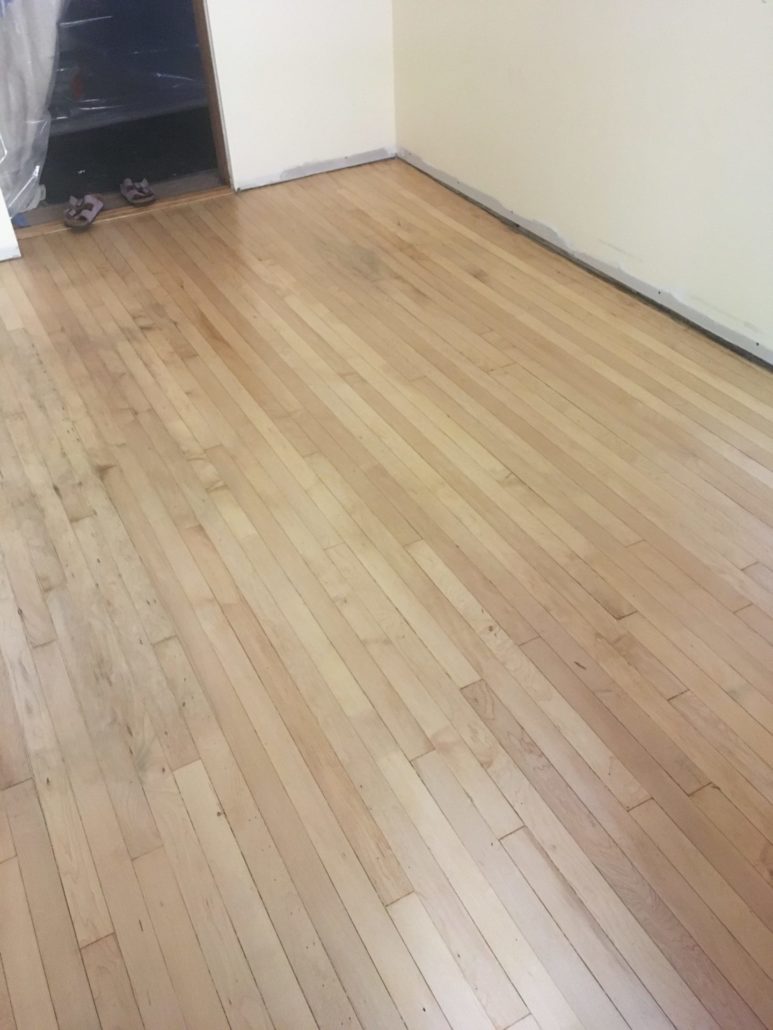 This is the floor, as of a couple of days ago. As I noted, this was another area where we got lucky—better than lucky, actually. I was hoping that the maple flooring was still more or less intact, but the contractor warned me that it might not be in great shape.

They started the cabinets today, but you will all have to wait for the “after” pics to see those.