The Mojave Desert is a strange and wondrous place, made all the more strange by the fact that a lot of it is in California, which is also strange and wondrous.  Guardian Lions in the Mojave!  Who knew?  Great pics, as usual, and an interesting story, even if we don’t know all of it!

Amboy is a small community on Route 66 in the middle of the Mojove desert. It was one of the few communities along Route 66 (now the National Trails Highway) between Needles on the California/Arizona border and Barstow, CA and hosted a motel/cafe as well as a gas station. When I-40 bypassed Amboy in the early 1970’s the town declined but didn’t die as some of the other towns along Route 66 in the area did like Essex further east. One of the reasons is the large volcanic crater a few miles west of town.

This area was of of interest to me due to being very dark and the crater being a nice foreground element. I visited 2 years ago to get some photos of the Milky Way over the crater and capture the Perseid meteor shower with somewhat disappointing results. I vowed to return. As I looked at Google Maps to plan my return, I noticed designations of the maps east of town along the highway for “Guardian Lion East” and “Guardian Lion West” (these points of interest no longer show up on Google Maps).

Expanding to see if there were photos of the area, I discovered photos of two large Chinese Foo Dog or Guardian Lion statues. These statues guard temples of palaces in China and other parts of east Asia (there are a pair at the entrance to the Chinese Garden at The Huntington). Little is known as to how these statues suddenly appeared in the middle of the desert outside of Amboy about 7 years ago. These statues have a cinder-block base and are about 6 feet tall and made of stone.

The placement of these statues in the middle of the desert took some planning and heavy machinery to accomplish. So these statues provided another reason to visit Amboy and some additional planning (figuring out which direction they are facing and the right time to visit to get the galactic center in the right spot).

It’s about a 3 hour drive (without traffic) from Glendale to Amboy, so I headed out on a Sunday afternoon to time my arrival before sunset since finding the lions were be difficult in the dark. I arrived a bit later that I’d hoped, the sun had set about 15 minutes earlier. Traveling west down Route 66 I kept my eye out of the statues on the left side of the road in the diminishing light. I noticed two motorcycle riders to the left and the first of the lions. I pulled over to get a closer look and check to where I’d set up for my shots. The bikers left and I waited for astronomical twilight to pass to get my shots.

While I was waiting, I walked own the highway about a quarter of a mile to the west and found the other guardian lion. After astronomical twilight I shot the eastern lion (female) and drove west and shot the western lion (male). I headed further down the highway to Amboy and to my delight, the sign at Roy’s motel/cafe was still lit up. I set up my camera, and they turned the lights on the sign off. I still took a picture, which you see here.

I continued west to Amboy Crater. They have a nice picnic area with a view of the crater, but I hiked a bit on the trail until I reached a ridge in the lava field to setup for my photos. I took a set in portrait orientation and then also took a panorama in landscape orientation, but by then the moon had begun to rise. While this made for a more washed out photo of the Milky Way band, it did allow for a moonlit foreground. 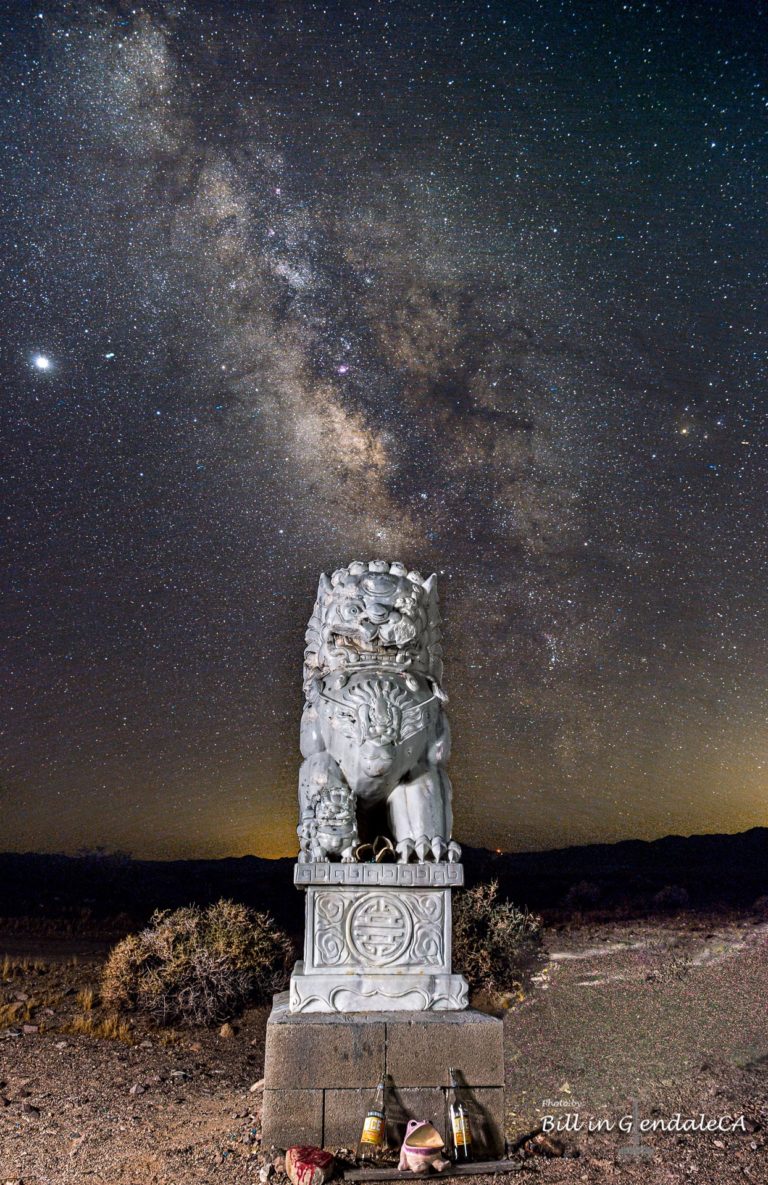 Eastern Guardian Lion and the Milky Way. This is the female lion which you can tell by the lion cub under her right paw. 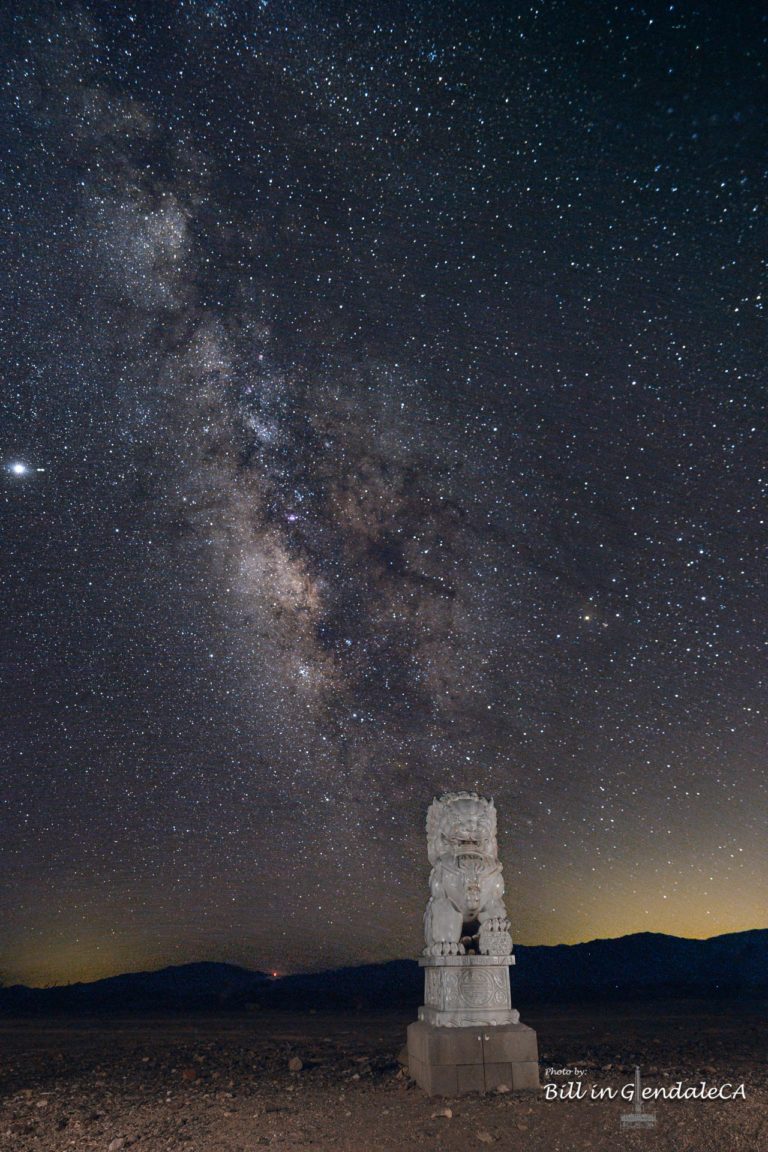 Western Guardian Lion and the Milky Way. This is the male lion with a ball under its left paw. 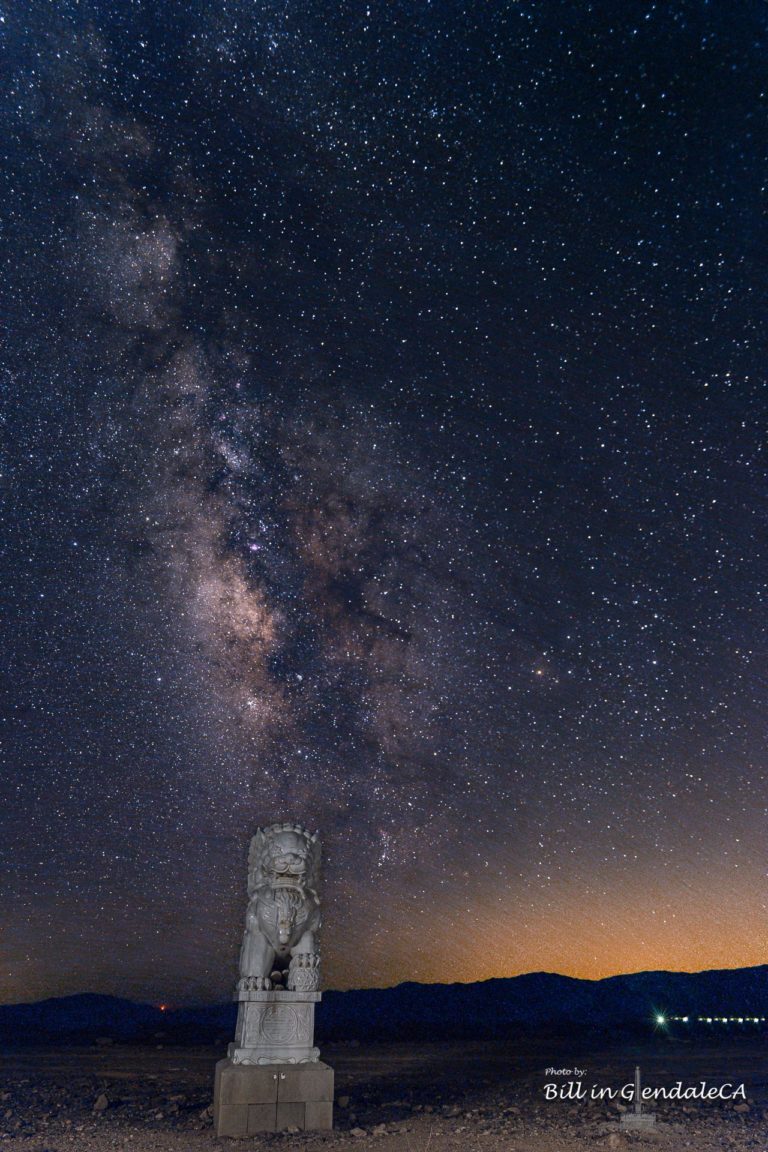 Male Guarding Lion and the Milky Way with a train in the background to the right. 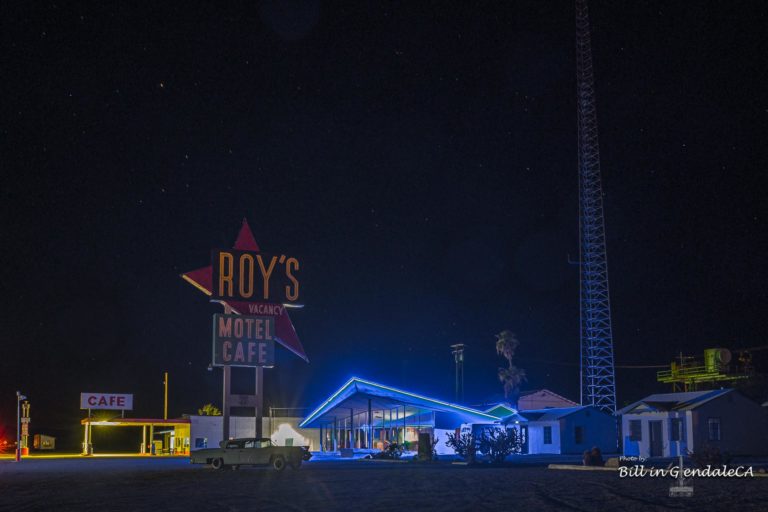 Roy’s diner and cafe in Amboy. When I arrived the sign was lit, they turned it off just as I was setting up for the shot. 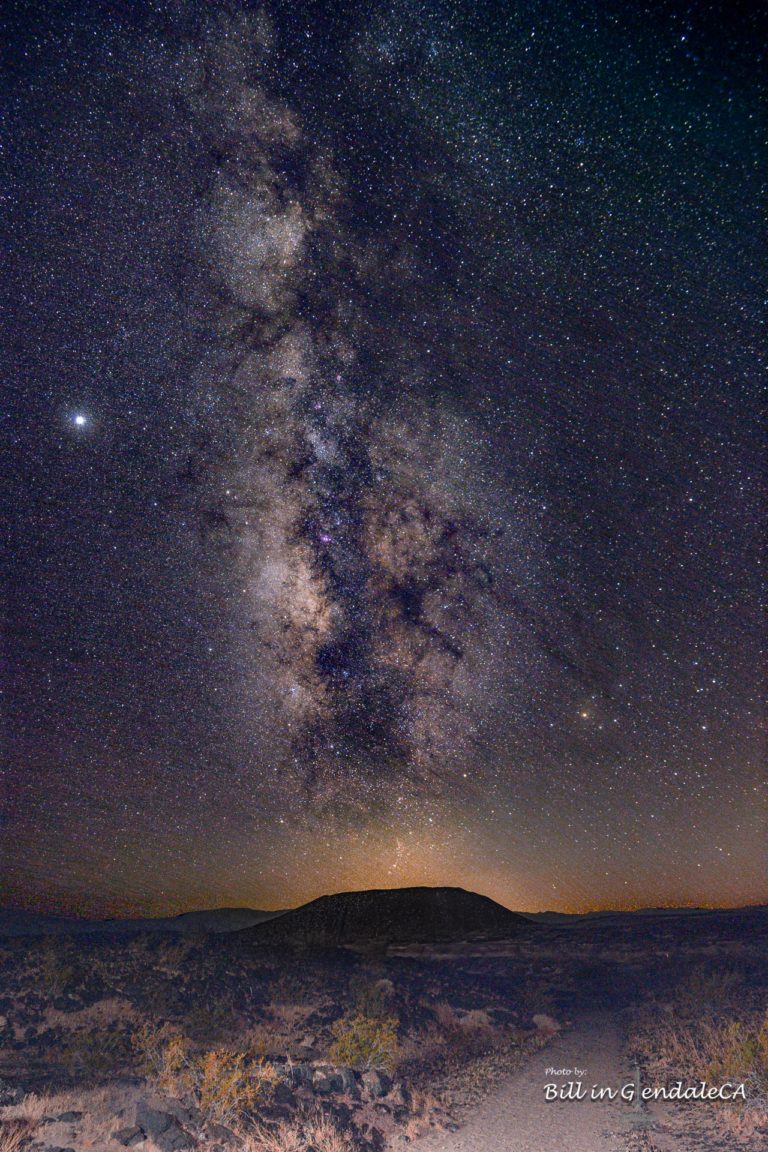 The Milky Way seeming to erupt from Amboy Crater. 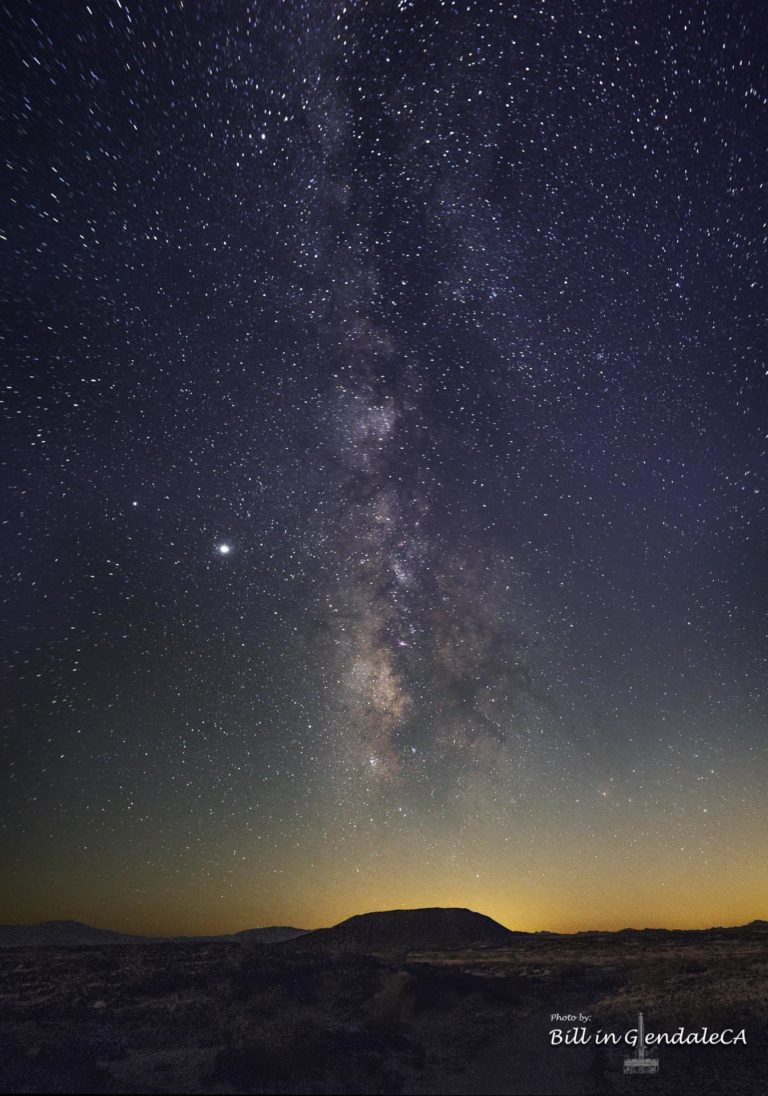 This panorama of the Milky Way over Amboy Crater was taken just after the Moon rose in the east.