My way of coping lately has been to focus on what I have control over (note my Ridin With Biden sign in the bottom photo).  Some days I just unplug and do something in my own little corner of the world.

I’ve been working within the climate change/solutions community for several decades. There came a time when I felt I was just screaming into the wind and needed to take a break. But I did what could within my own life: plug-in hybrid car,  electric yard tools, high-efficiency appliances, heating system, and whole house fan that have more than returned their investment.  Now, it’s time to kill my lawn. I’ve wanted to do it for quite a while.

It began innocently enough with laying out an outline of what might be nice and a promise I’d think about it for a while. Two weeks later, phase 1 is complete.

This was the beginning, outlining with bricks to see how I’d lay out the new yard

My goal was to create an excellent soil base to replace what is now pretty much cement hard clay. The previous owners used a chemical lawn service for at least a decade, that left the soil depleted and hard as a rock. Over the past four years, I’ve been amending it with compost, manure and aeration. A record drought this summer proved that none of those measures were enough to reinvigorate the lawn and the soil was still like granite.

I had several choices: use chemicals to kill (just no), or a bobcat to scrape, the grass and bring in a large amount of good soil and replant the grass, or add sod, or xeriscape. I was definitely leaning towards creating an area of low-water native plantings. But the cost of scraping a lawn and bringing in yards and yards of compost/soil was cost-prohibitive.

Then a bit of research led me to the Sheeting Method. Better soil would be achieved by killing the grass and weeds with a sealed layer of cardboard and mulch. Leaving an excellent base for native plants and bushes to replace the grass.

The next step was a hunt for cardboard.

Thanks to neighborhood apps, I was able to relieve multiple neighbors of their cardboard just before recycling day, so it was already flattened. They didn’t have to drive it to the recycling center, and I got several carloads of boxes.

I hired a landscaper who was more than happy to learn more about the Sheeting Method and then I started laying cardboard a few days before he arrived.

Several things I learned as I went – clear tape is compostable but takes a long time. Removing it was easy, and research told me that any leftover would float to the top of the soil as the cardboard decomposed. So I didn’t sweat the small pieces. Chewy, Amazon and Walmart boxes were my favorite. They didn’t use clear tape or external packing slips.

Also, working with wet cardboard is much easier than dry. Boxes have to be torn into even pieces, so the end flaps don’t leave gaps. Wet cardboard tears easily at the seams and leaves clean edges. Then pieces are layered and overlapped in a way so that no grass or weeds can escape through any seams. I used brown paper – paper bags, packing material – and small pieces of cardboard around existing plantings. In the end, not a blade of grass showed through. 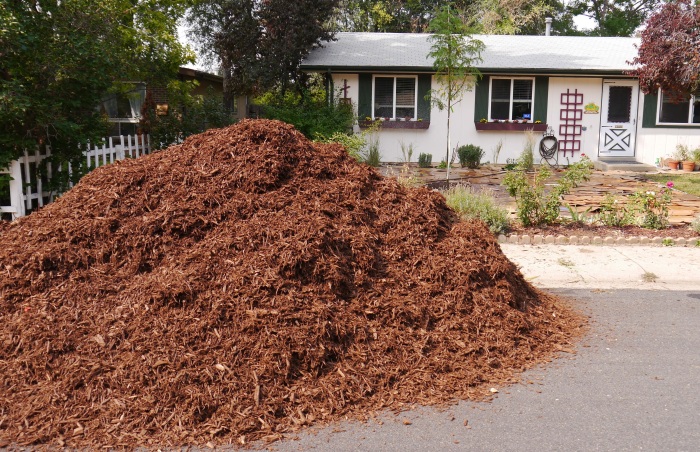 Then the fun began. My landscaper planted my new tree and delivered a heap ton of mulch. It was taller than me when it was unloaded. We had some fun with Jurassic Park and Great Dane jokes. The landscaping crew did a beautiful job, ensuring everything was well-covered to avoid any grass or weeds showing up.

Eventually, there will be a few that find their way, because “life finds a way,” but it should be easy to tackle them before they become a problem.

The phase one results are beautiful.

Now I’m playing around with paving stones, rocks and plants for placement. I won’t be able to plant anything new until spring. Don’t want to pierce the weed barrier prematurely. 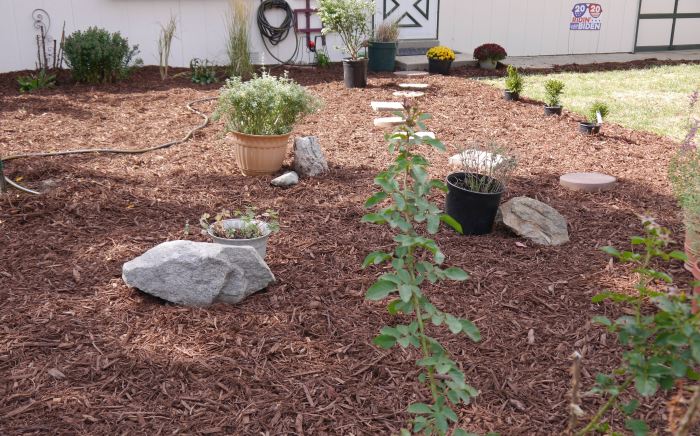 At least now, the neighbors can stop wondering why I was watering cardboard for a week.

If you’re wondering why I left an area of grass, there are two reasons. The first being, that’s a plum tree, and I was not going to try and pick plums out of mulch every summer when I could just mow them into the lawn with my (electric) mower. Second, I’m still looking at selling my house in the near future, and grass is still desirable as a selling point.

Stay tuned for phase 2 – the plantings…