A few photos for our fall color series.  I stayed in the village of Walchsee, Austria, in the Tyrolean Alps for a couple weeks in late 2009.  As I mentioned in a previous Walchsee series, the surrounding mountains host numerous, well marked hiking trails, with Alms and Hütte rewarding hikers (and mountain bikers) with beers and stunning views.  These photos are from shorter hikes in the flatlands rather than the mountains.

END_OF_DOCUMENT_TOKEN_TO_BE_REPLACED 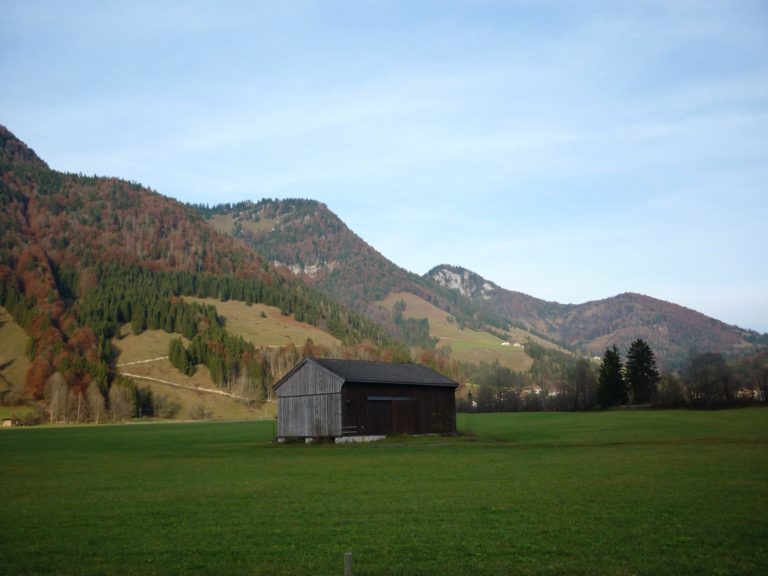 Trees starting to display their autumn colors, at the start of a favorite hike around the Schwemm Moorlands (Moorlandschaft Schwemm, a protected remnant bog that hosts a diversity of unique habitats).  The lower mountain slopes have been cleared for pasture.  Behind the barn, you can see a trail headed up the mountainside.

So, as some of you have noted, I haven’t had a great deal to say for quite a while now. Lots of reasons, some obvious (how many times can you say the Republican Party is a death cult? All of them, Katie, I guess), some relating to just life stuff, but it’s past time for me to do my part here.

I do have some posts brewing on some present-day stuff, but I got a message today that someone had commented on my long-dead site, The Inverse Square Blog, which led me back to some of the stuff I’d written in the deep recesses of time, when Megan McArdle was my favorite target.

I’ve given the McArgle-Bargle beat up, as I’ve grown tired of cutting off hydra-heads, and the piece I’m resurrecting here is actually a column I put up at ScientificAmerican.com back in the day (2011). I’m reposting it here as a conversation starter, because though the question it discusses is long settled, the dynamic behind it is very much still with us.

Bit of background. A neutrino experiment collaboration called OPERA announced in September of 2011 that its instrument had detected neutrinos traveling from the CERN particle accelerator in Geneva to the OPERA in Gran Sasso, Italy faster than the speed of light.

This was huge news at the time, but most working physicists had little confidence that the result would survive–not because the Opera team were bad scientists, or because there was any fraud involve, but because of…well, that’s what’s discussed in the piece.

The result was shown to be in error by late spring, 2012, and the claim was withdrawn.  I wrote my piece before that happened, because it seemed to me to be a great example of science working as it should–and as a way to see science as a daily, lived, human experience. That view of a process engaged with all the flaws of our species that nonetheless can reliably produce lasting, comprehensible results is a theme I’ve written about a lot.  A large part of my interest in this area comes from the fact that this understanding of science as both a process and its results is completely at odds with the malicious parody of science the right uses to wreck the application of reason and experiment to the bettering of the human condition. The example I give in the piece you’ll find below the fold is the hardy perennial, climate change denialism; we’re seeing the same moves now with the weaponized politicization of basic public health (and molecular biology, for that matter) around COVID.

So, below the fold find more, and treat this as a thread for conversation about whatever that provokes, or anything else at all.

END_OF_DOCUMENT_TOKEN_TO_BE_REPLACED 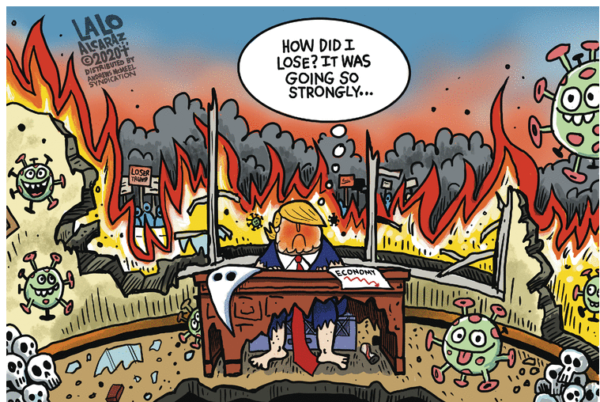 Every state Rs were contesting (AZ, GA, MI, NV, PA, WI) has now certified its results. Trump "path to victory" = getting courts or legislators to toss out the results.

This was where it was always headed, but wasn't official til rn.https://t.co/kwhU80J77R

END_OF_DOCUMENT_TOKEN_TO_BE_REPLACED

Hey, November. Uh, when did you get here? It’s the 30th? How did I miss the whole month? And why does the month feel like a year? This is the longest shortest year in human history. Perhaps it’s the pandemic travel plans that involve making a circuit between the home office and the bathroom with special trips to the outside world for supplies. Just thought if I was going to be stuck in a home, fearful of seeing humanoids during my stealth runs to forage for food, I’d have stolen a nice compound during this zombie apocalypse already. I mean, there should be some upsides. But I digress.

By now I’ve started the gift making and the targeted mailing dates for Christmas. Instead, I’m currently wrapped in a blanket, avoiding work for a bit (lies, a lot). Usually, there’s a ton of cookies and other things in various stages of prep to packaging.

Instead, it’s just work. I resolve to put this weird year to the side and get some holiday on. Get out the antlers, dust myself with flour! No reason to not hold a space for seasonal joy no matter what. What’s on your Christmas list? Any fave treats we should know about? I’ve got a new recipe I want to develop – fingers crossed it’s edible. This is an open, food porn themed thread. No polly, no tics, no diets. Have at it, Jackals. Also, wonderful to see your lovely faces on the Thanksgiving zoom! Let’s do it again, shall we?

END_OF_DOCUMENT_TOKEN_TO_BE_REPLACED

It ends on December 15th for Healthcare.gov states.

Insurers have few boundaries as to how they can design their plan offerings on Healthcare.gov. Plans can not exceed a fixed maximum out of pocket limit. Plans must fit into a metal band that is determined by an actuarial value calculator that the government issues every year. Some benefits can not have cost sharing attached to them. Some plan designs may qualify for enhanced tax benefits. Those are the legal and regulatory boundaries that constrain plan design. They aren’t much. Insurers have habits. Some insurers like deductible heavy designs. Other insurers love co-pays. Insurers just have to mix and match deductibles, coinsurance and co-pays to make the sums work.

Healthcare.gov and many of the private broker websites allow for a search and sort based on deductible with the lowest deductible at the top of the search result list: 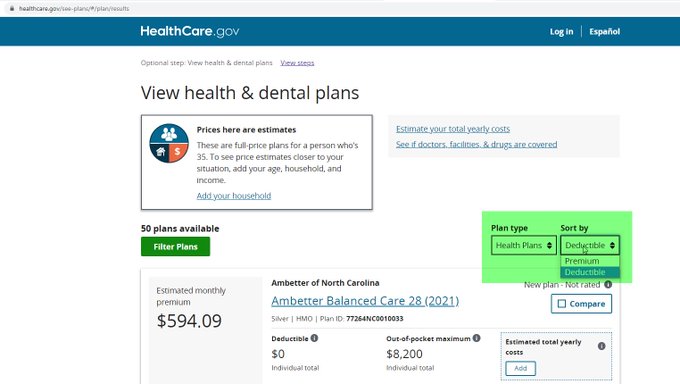 At some point, I have to wonder how much a zero deductible is market segmentation instead of a search engine optimization strategy? I would be shocked if SEO considerations are not at play for at least a few insurers.

Below the fold is the Tableau of all zero-deductible plan offerings by metal level on Healthcare.gov for 2021:

END_OF_DOCUMENT_TOKEN_TO_BE_REPLACED

For the first time in history, these communications roles will be filled entirely by women.https://t.co/SjWAWJg941

END_OF_DOCUMENT_TOKEN_TO_BE_REPLACED

This is the last set in this series, as fall is slowly giving way to winter here in flyover country, with migration slowing down and winter residents settling in. To me much of the joy in fall migration is the return of our winter hawks, a diverse mix of Red-tailed Hawk subspecies, falcons, and the occasional Rough-legged Hawk. I have yet to see the latter this season, but here are some pics of some of the others, as well as a winter-resident sparrow or two.

END_OF_DOCUMENT_TOKEN_TO_BE_REPLACED 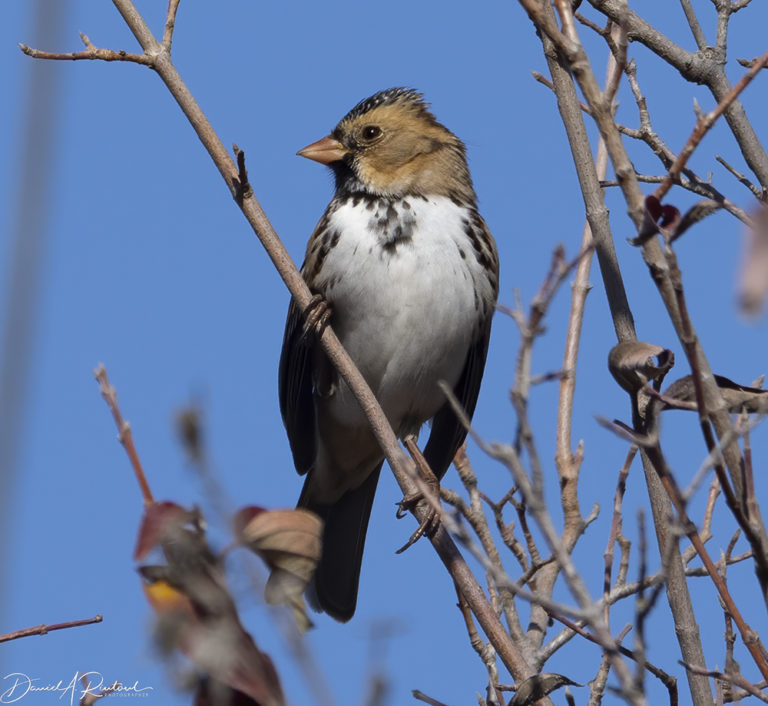 Harris’s Sparrows are abundant and vocal specialty birds of this part of the country. They nest in virtually inaccessible parts of Canada, and they are one of the last passerine species in North America to have their nest and eggs described. When they appear irregularly outside of the Great Plains they are rare enough to attract crowds of birders, but here they are an expected and welcome part of the winter bird scene.