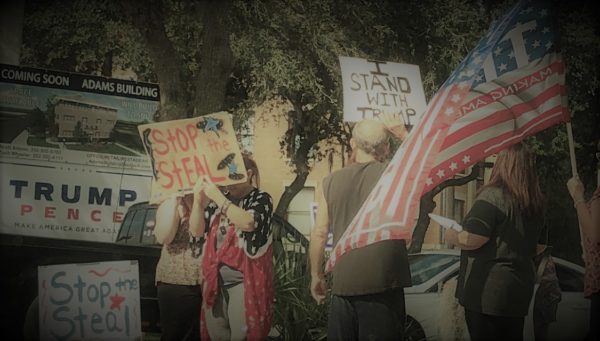 Politico has an article about Dems and left-leaning independent voters reclaiming the American flag after the election:

[F]or many people on both sides of the political chasm, the flag had been re-cast as a kind of shorthand, an extension of the MAGA hat—sending an instant message of which side you were on, or inspiring stereotypes that pulled the country even further apart.

“When I saw somebody with a flag bumper sticker or a t-shirt with a big flag on it, I immediately thought. … It’s a Trump nut job. A crazy person,” said California screenwriter Ed Kamen…

“My attitude’s changed about it now,” Kamen, an independent, told me weeks after the election. “I am proud of my country, I love my flag, I love my country. And it’s nice to see the flag again representing the country as a whole, instead of one section of it.”

The article acknowledges that Republicans co-opted national symbols long before Trump — a literal flag humper — came along to represent the logical extension of Republicans’ worst instincts. But from what I’ve seen, the timing of the change described in the article is off; liberals taking back the flag is not just a post-election thing.

Possibly it’s an instinctive response to the idolatry surrounding Trump and the un-American character of his time in office. W was an awful president, and his fans and flunkies questioned opponents’ patriotism. But Trump’s brazen attempt to rebrand America as his property and conflate the national interest with his personal interests strike me as different from W’s more pedestrian Republican awfulness.

Maybe that’s the difference that made some of us reach for our national symbols. We tend to value things more when they’re endangered.

Trump’s hideous visage and/or logo desecrate some of the American flags flown by cultists around here. I’ve never been one to attach a lot of meaning to symbols like flags, but seeing the Trump-despoiled flags makes me angry, as does the thin blue line flag, which I consider another form of desecration.

I’ve seen the whiny cultists in my town who spend their weekends haunting the courthouse traffic light corner and screaming about election fraud and communism fly thin blue line flags and an upside down American flag. But mostly they wave Trump flags.

I considered making a “Who’s Sleepy Now, Bitch?” bumper sticker to escalate my taunting campaign against them. But maybe I’ll just put an American flag sticker on my car — for the first time in my life.

It’s not so much that we’ve taken back the flag; it’s that the Trumpists tossed it aside in favor of grotesque knock-offs that express their allegiance to their idol instead of the country. So the flag is ours now.