You are here: Home / Economics / C.R.E.A.M. / Repub Venality Open Thread: #MoscowMitch Is A Mean One 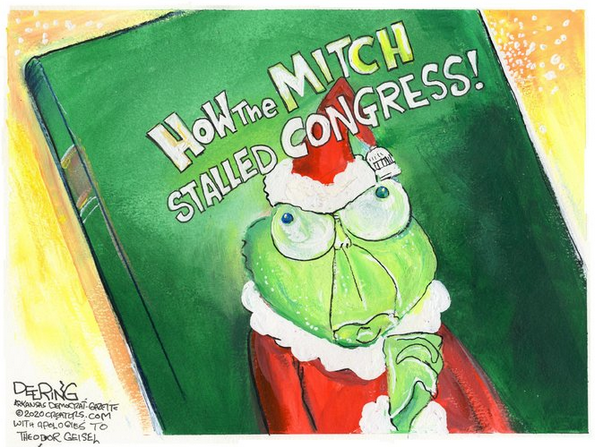 DEMOCRATS: Give people money so they don’t die

REPUBLICANS: Kill as many people as we can and tank the economy to cripple a Biden presidency

McConnell doesn’t give a rat’s arse how many of his constituents suffer, but he’s not good at keeping his caucus in line, and some members of that caucus are worried they don’t have his electoral immunity — or a multimillionaire wife to support them if they’re returned to the private sector:

A $908 billion bipartisan COVID-19 relief plan set to be introduced in the U.S. Congress as early as Monday will be split into two packages in a bid to win approval, a person briefed on the matter said…

One will be a $748 billion measure, which contains money for small businesses, the jobless and COVID-19 vaccine distribution. The other will include some key sticking points: liability protections for business and $160 billion for state and local governments.

The leaders of the House of Representatives and Senate did not immediately respond to requests for comment.

One of the sponsors of the $908 billion plan, Democratic Senator Joe Manchin, said earlier on Sunday it would be introduced formally on Monday…

“The speaker reiterated her view that a compromise on the liability issue should be found that does not jeopardize workers’ safety,” Hammill said.

Also on Sunday, House No. 2 Democrat Steny Hoyer suggested his party might be willing to accept a coronavirus relief deal without the state and local aid that Democrats have been insisting should be part of it…

The budgets of GOP-led states are being hit equally hard since the pandemic hit, despite congressional Republicans’ claim that including state aid in a coronavirus relief deal would amount to a bailout for states run by Democrats. By @geoffmulvihill. https://t.co/B736dXItng

Let's have this debate. If all Republicans are really capable of offering with their call for "divided government" is a check on silly lurid fictions about defunding police and antifa burning down cities under the direction of Empress @AOC, then say so:https://t.co/Lqz0lAEfB4 pic.twitter.com/15Zpi4477L

39 Hours to the end of Open Enrollment
Next Post: Stacey Abrams: Warnock Donations »