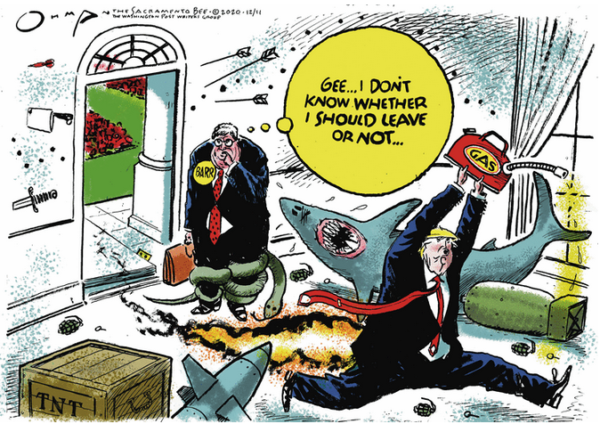 From what I can tell, the last few weeks have been an elaborate dance between Barr’s desire not to have his reputation (further) besmirched by being around when the Oval Office Occupant is finally packed off, and Trump’s natural instincts to ‘punish’ anyone he perceives as insufficiently loyal… or anyone who happens to be around when Trump needs an object on which to vent his rage. Neither party could risk giving the other an excuse to — shall we say — release the kraken.

Barr’s resignation letter and Trump’s tweet are almost entirely divorced from the reality of what their relationship looked like lately. Trump talked openly about firing him and senior staff never really knew where they stood.

… The cordial tone of Trump’s tweet on Monday afternoon announcing Barr’s exit was in marked contrast to the president’s public scolding of the attorney general in recent weeks. In Trump’s telling, Barr had failed to make public a financial crimes investigation into Joe Biden’s son Hunter that was ongoing before the election and failed to muster the Justice Department in support of Trump’s legal campaign to upend the election results.

Rather than echo those complaints, and earlier ones about Barr’s refusal to indict the president’s political adversaries, Trump’s announcement praised the attorney general’s record and suggested nothing was amiss.

“Just had a very nice meeting with Attorney General Bill Barr at the White House,” Trump tweeted. “Our relationship has been a very good one, he has done an outstanding job!”

In a two-page letter that Trump also tweeted out, the attorney general didn’t explicitly say he was resigning, but said he would “spend the next week wrapping up a few remaining matters important to the Administration and depart on Dec. 23.”

Trump had grown so frustrated with Barr that he was considering firing him, but had not decided by Friday whether to do so, a friend of the president’s said. Trump remained angry about the attorney general’s remarks that the Justice Department had found no evidence of major election fraud, the associate added…

If ‘Ever Lower’ Barr was hoping for a burst of holiday comity from his soon-to-be-former coworkers, he’s a disappointed man tonight…

Lied to cover for Trump.

Launched political investigations.⁰
Subverted justice and the rule of law.⁰
And violently cracked down on protestors.

So good riddance.⁰
Now, the work of restoring a credible and independent justice system must begin.

Trump firing Barr to steal the attention away from Biden's electoral college win, a real classic of the genre. Just a few weeks left of this stuff, get it while you can.

I retain hope that neither Trump nor Barr has the temperament required not to blow up each others’ flimsy rationales on their way out. Note the dates on the following tweets:

usual skepticism applies here but as I said before bill barr is ten times smarter than trump, twice as good at playing the ratfuck game, and the last dude in the lineup trump should fuck around with https://t.co/mrIVPiB9E9

barr has long been the most frightening member of this administration because unlike absolutely everyone else he’s extremely intelligent and knows exactly how the game works at a master craftsman level. please, please fuck with him.