You are here: Home / Open Threads / The Pestivus Parade: A True Story (Rerun and Open Thread)

AUTHOR’S NOTE, 2020: I first shared this true story here seven years ago, when I was living about 100 miles from where the action takes place. I’m now back in my home county. There was going to be a Christmas parade again this year — the Republicans who run the joint are on board with Gov. DeSantis’s “Pandemic? What pandemic?” strategy for containing the public health crisis.

But the county’s top health official told the commissioners that the hospital is already at capacity and that holding the traditional parade would lead to rationing healthcare. Remarkably, that got through to them. So, the commissioners decided to have a parked parade instead. The floats will be stationary in a big parking lot, and people can walk around them in family groups instead of gathering at the side of the road in a crowd to watch the floats pass. We’re still going to skip it. Anyhoo, on with the story…

I grew up in a small coastal town in Florida. Every year there was an annual holiday parade featuring an honor guard, Future Farmers of America, the school marching band, floats sponsored by local merchants and Santa and his elves on the town fire truck.

One year, my younger sister and I got to be in the parade. We were about five and six at the time, so when we were told that we were actually going to be on a float in the parade instead of mere spectators, it was the most exciting thing that had ever happened to us.

Even when our mom told us we would be riding on the Florida Pest Control float (a display sponsored by the exterminator business where our grandfather worked at the time) and costumed as vermin, it didn’t dampen our enthusiasm. At least, not until we saw our costumes, which our mom spent days sewing for us. I was to dress as a rat, and that was okay with me: 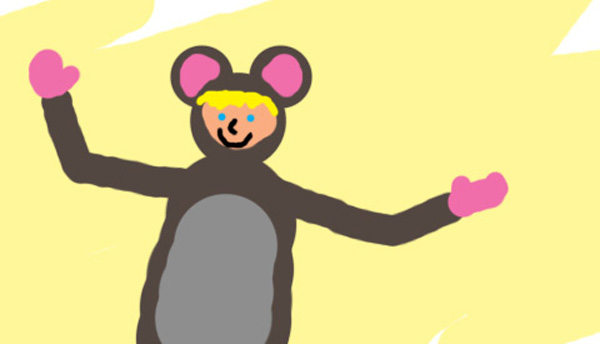 However, my sister had to be a cockroach, and she was NOT happy about that, even though our mom had cleverly used fishing line to make the costume’s fake roachy arms move whenever my sister moved her real arms: 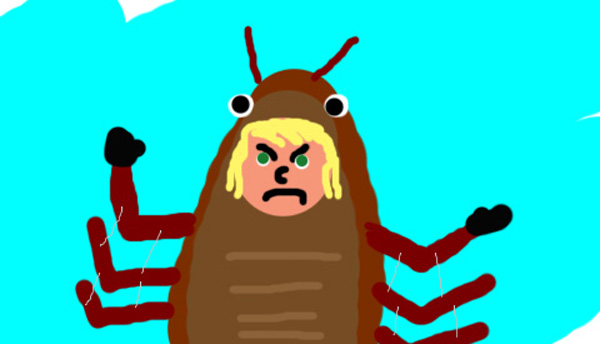 And in truth, my sister did have a legitimate complaint, since, in an attempt to get the proportions right, our mom had made a roach costume that tightly restricted the wearer’s movements. Most of my sister’s real legs were encased in the padded felt roach carapace, with just her shins and feet sticking out of a fairly small opening at the bottom: 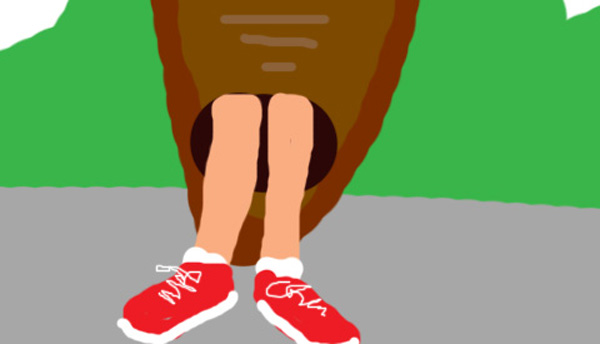 This design forced her to take baby steps in the costume. After trying it on, she asked why she couldn’t be the rat and I couldn’t be the roach. But mom pointed out that as the eldest, I was the tallest, and it wouldn’t be logical for a roach to be taller than a rat, not even in Florida.

When the evening of the parade finally arrived, we went down to the beginning of the route to meet up with the Florida Pest Control float crew. The float was a livestock trailer attached to a pest control truck. Someone had fashioned giant ants out of red Styrofoam balls and pipe-cleaners and wired them randomly over the float’s exterior.

On the float, there was a bin filled with candy as well as a box of flyswatters emblazoned with the Florida Pest Control logo. We were to throw handfuls of candy to parade goers (I guess it never occurred to anyone that people might be reluctant to accept candy from vermin). We were also instructed to “gently toss” flyswatters into the crowd. My sister was still seething about the roach costume as our father hoisted us onto the float.

A more empathetic sibling might have offered comfort, but I threatened to beat the shit out of my sister if she didn’t stop whining. Thus, we both began the parade in a foul mood, expressing our ire by hurling candy with great force at other children and attempting to hit as many people in the face with the flyswatters as we could: 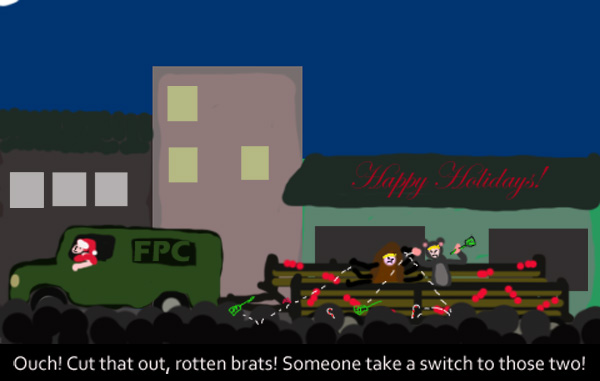 You could say the crowd wasn’t on our side. But then the Florida Pest Control float came to an abrupt halt, possibly to avoid bumping into the float in front of it. Since I had unrestricted use of my legs, I was able to maintain my balance. But my sister’s costume tripped her when the truck lurched, and she fell against the railing of the float, clinging to it and wailing piteously.

At that moment, I happened to have a flyswatter raised high over my head, intent on hurling it full-force at my Sunday school teacher, whom I’d spotted in the crowd. But then I noticed my roach-sister splayed on the railing in front of me, emitting annoying howls. I began swatting her padded carapace, which didn’t actually hurt her, but was still fun. The crowd went wild: 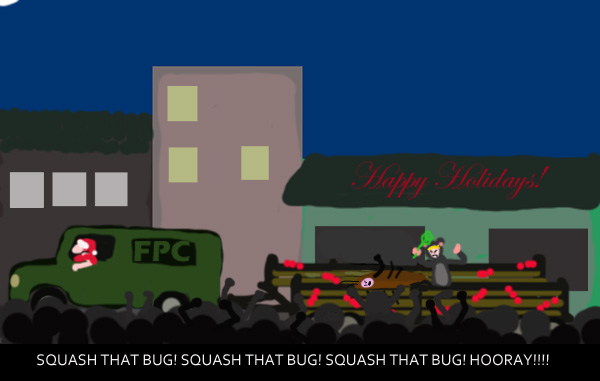