You are here: Home / Pet Blogging / Furry Friends / Something Fabulous and Milo: A Love Story (and Gigi too)

Something Fabulous shares her kitties and their story with us.

There is something to be said, another time perhaps, about a feminist critique of pet ownership: Why is it “Cat Lady,” never “Cat Dude”? Why is there no similar snide pejorative about dog people? How many cats do you need, actually, before you get the title? Briefly, the answers are:

So, here I am, a formerly proudly dog-only person, and my two cats: Meet Milo and Gigi.

Milo and his brother Oliver had just been returned to the rescue where I volunteer. Oliver, a tabby, was friendly and flirty, literally put his paw out between the bars of the cage to pet me. And when I sat down and opened the door, he came right out and sat on my lap. I was Chosen.

But he was a bonded pair with his very handsome but extremely shy brother Milo. And I had not been in the market for one cat, let alone two. So I went home to think about it, to talk with my landlady about making an exception to the no-pets lease, see if this could be a thing.

Two mornings later, the director of the rescue called me in tears. Oliver had died in his cage overnight. Ultimately the vet looked at his records and noted he’d had a chronic kidney disease and decided he’d likely died of it, exacerbated by all the changes and stress he’d gone through. 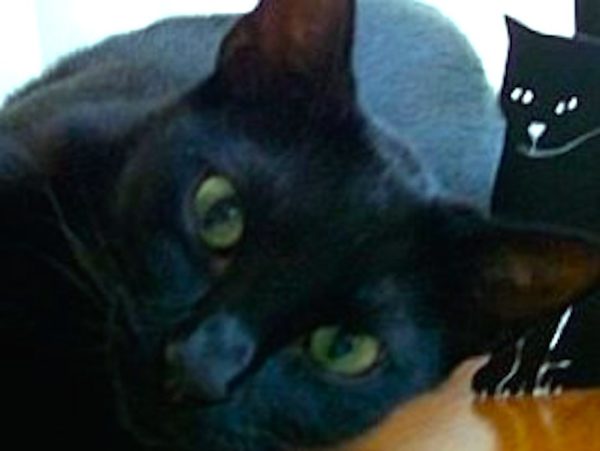 Later, our director told me how black cats, shy cats especially, are the hardest to place. She was sure Oliver hung on long enough to find Milo his new home. I, who never cry, and don’t believe in spiritual hoo-ha; wept and wept.

We went on happily for a few years. I would occasionally foster a kitten or 2 (or 4). Keep ‘em in the bathtub, train ‘em up, and send them on their way. 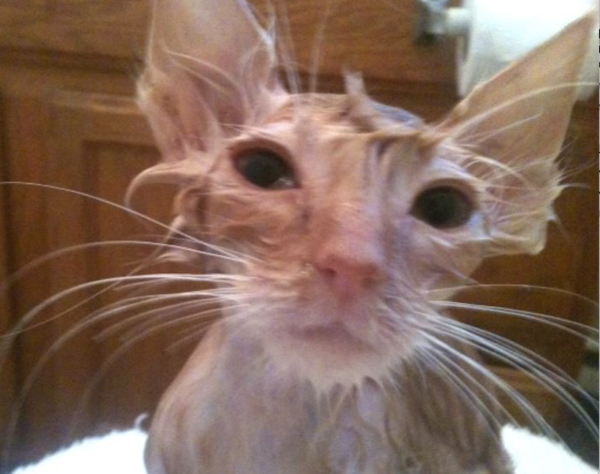 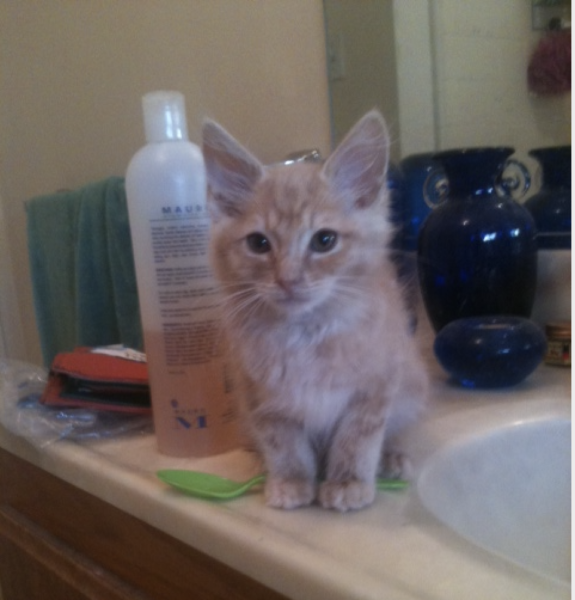 But then, one stuck: 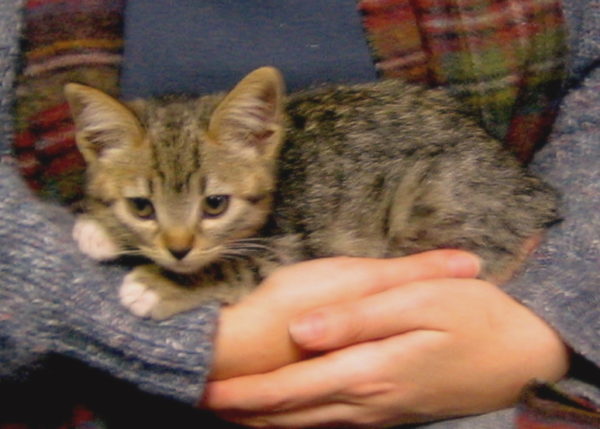 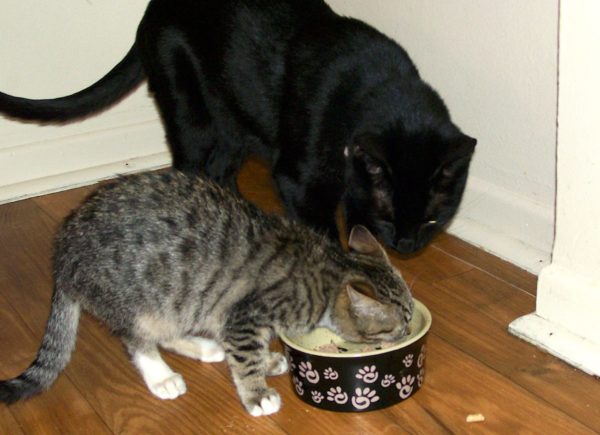 We named her Gigi. And they became pals. 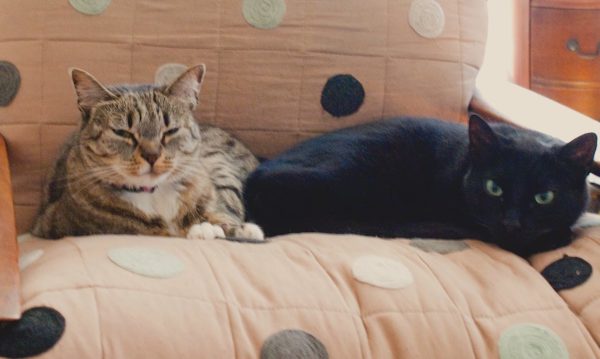 And the years went by.

About 4 years ago, Milo became diabetic. My Sweet Pootea! So sweet, we joke, he got The Sugar. But! We got on a regimen of testing, insulin, special foods, carried on. All was well!

We continued to get older. And started needing more supplemental help & support. But we carry on, one day at a time, learning new things all along the way. 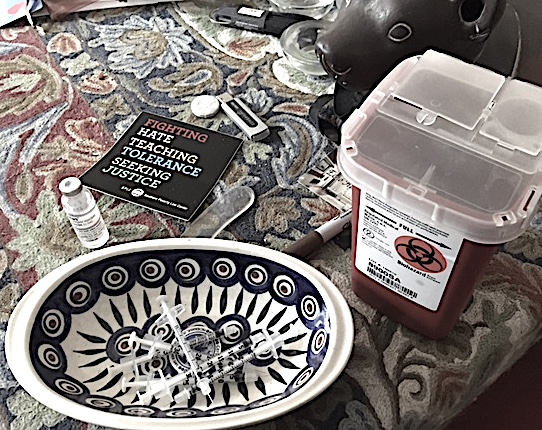 Then around Mother’s Day last year, I thought I had lost him. Called the emergency final-home-visit vet to see about appointments on the holiday weekend, as he was fading so fast. Wrapped him snugly in a warm bath towel and laid him on my chest to sleep. Our last night together, I thought…

…And he woke at 4 am, shook himself all over, stretched and walked to the foot of the bed, where I’d put a dish of his favorite food, and started to eat. Nothing to see here, move along. 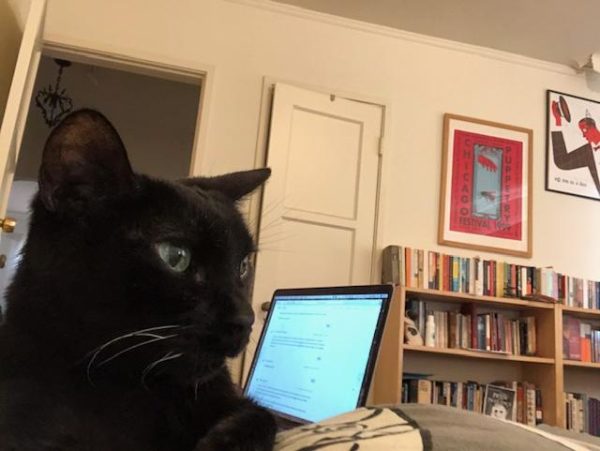 And so here we are now: 17, and not doing so great. And yet: doing great! He keeps pulling out another of the nine lives cards. Always a little skinnier, a little frailer than the time before, but on we go. These last few days, though, that pace has accelerated, noticeably.

We are lucky, I know, to have whatever time we have left. In my head I keep making analogies to my dad, which I realize is a little strange, but nonetheless works for me: he was a tenacious old goat with many many health challenges, but still defied all medical predictions for years, and somehow lived to be 86. I remember making a Facebook post at the time we put our dad in hospice, something like, “We don’t know exactly how the road will go from here, or how long we will be on it, but we are on that road.” And I feel something similar here, with Milo: every day is a challenge, and has some annoyances, and is a gift. 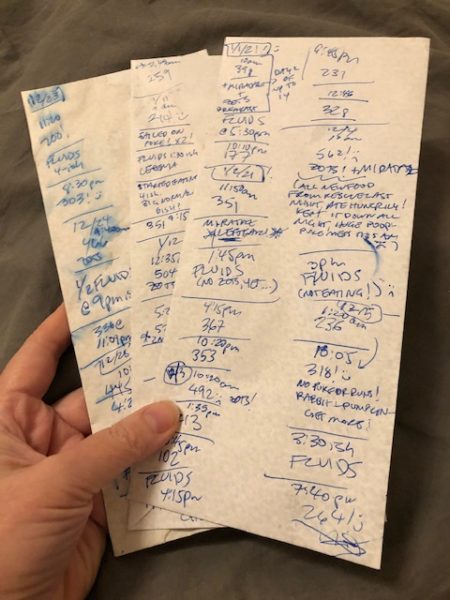 This last year has sucked so much. But fortunately, my extreme unemployment has also meant that I had all the time in the world to micro-manage his blood sugar readings, his food intake, all that. And in my extreme isolation and home-bound-ness, they have been there for me, and each other. 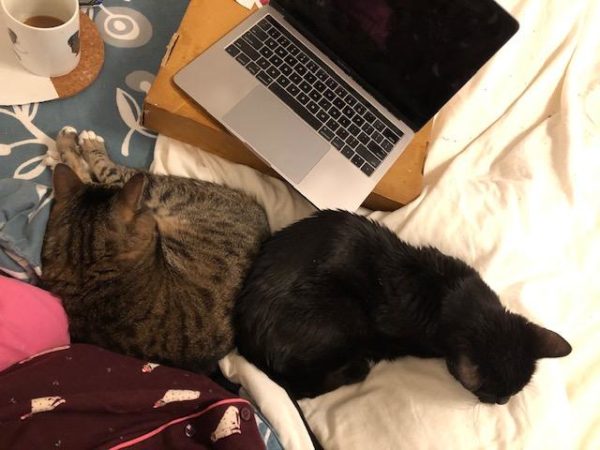 None of us knows where the road is going, but sooner or later we are all on that road. At least we can be on it, together.

And we will go out, I hope, holding paws. 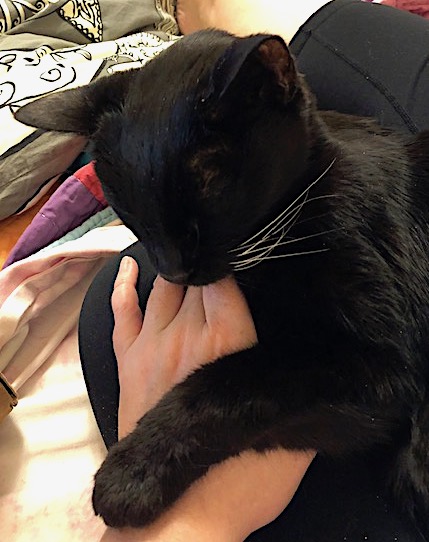