You are here: Home / Politics / America / This Business Will Get Out of Control: Congresswoman Marjorie Taylor Greene Edition

Earlier today, after Congresswoman Greene (R-QAnon) announced her opposition to the Equality Act, Congresswoman Newman (D-IL) tweeted out the following:

Our neighbor, @RepMTG, tried to block the Equality Act because she believes prohibiting discrimination against trans Americans is “disgusting, immoral, and evil.”

Thought we’d put up our Transgender flag so she can look at it every time she opens her door ??️‍⚧️ pic.twitter.com/dV8FatQFnx

It is important to note that Congresswoman Newman’s daughter is trans.

Ever the paragon of grace that is the flower of southern womanhood, Congresswoman Greene decided to respond this way:

Thought we’d put up ours so she can look at it every time she opens her door ??? https://t.co/7joKpTh6Dc pic.twitter.com/aBGRSiIF6X

Perhaps, you ask, Congresswoman Greene’s cruelty is lessened because she was unaware that Congresswoman Newman’s daughter is trans? Nope, it was fully informed and purposeful cruelty: 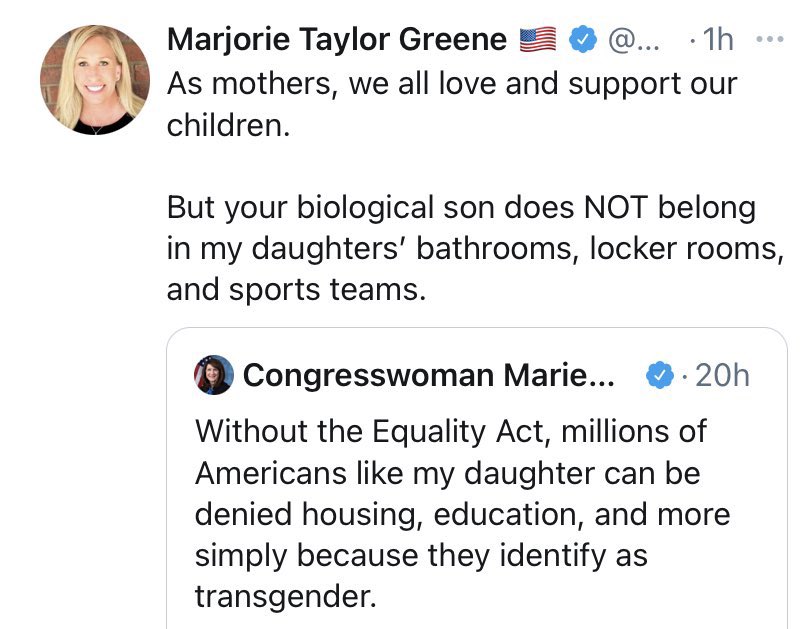 This is eventually going to get out of hand. We’ve already had one Democratic congresswoman move her office because of her concerns about Greene after several negative interactions with her. Greene’s schtick, along with Boebert’s* and Cawthorne’s, is to take the stunt, edgelord, shitposter behavior of Matt Gaetz and take it to the next level. I fully expect that Greene will, eventually, physically assault a Democratic member or a Democratic staffer. Or, even worse, she’ll try to do the stand your ground play:

It is only a matter of time before someone is hurt, if not killed, as a result of this asshole’s need to engage in performative bigotry to establish herself as the rightful Republican heir to Trump.

* I’ve been a bit busy so didn’t turn it into a post, but shortly after – as within the hour of – the screen grabs of Boebert on the Natural Resources Committee video-teleconference with the gun display behind her, I immediately pulled the Palestinian Islamic Jihad flag, the al Aqsa Martyr’s Brigade flag, and the Hezbollah flag. The first two have crossed rifles just as Boebert had on the shelf above and behind her head. The third has a single rifle being clutched by an upthrust hand. My conclusion, based on the imagery that Boebert was using, is that she was signaling her support for the violent liberation of Jerusalem from the Israelis.