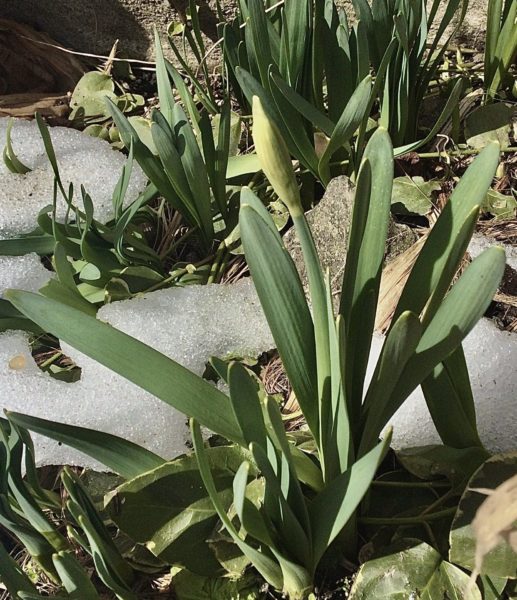 Thanks to commentor Jeffery, in the Philadelphia area.

(If it were New England — and our daffodils in the warmest micro-climate by the heat-leaking, south-facing basement window will be reemerging in the next couple of weeks — we’d know to expect at least one more snowstorm. Winter’s not over until the first daffs get frosted over!)

Seems like growing our own leafy greens, wherever possible, will remain a useful project. Which reminded me of this enticing Washington Post article on gardening under cover:

In the depths of winter, Niki Jabbour steps out of her suburban home and extracts fresh veggies from the endless produce aisle known as her backyard garden.

This January luxury, you might think, must occur in California or Florida, but Jabbour gardens in her hometown of Halifax, Nova Scotia. Like many gardeners in northern states and Canadian provinces, she has learned to extend the season by growing hardy veggies under covers. Climate change is a factor, in that milder winters make this enterprise more viable, but it still comes down to finding ways to wrap plants against the cold.

For Jabbour, a garden writer, broadcaster and Web publisher, this “undercover gardening” has been a part of her life for at least 20 years and is now fully expressed, both professionally and personally. Her family gets as much as three-quarters of the household produce from the garden. And she gets to tell the world about it, specifically in her new book, “Growing Under Cover”…

Anybody got opinions about Jabbour’s work? I’ll admit I’m interested in row covers mostly as a protection against pests — invasive seeds and animals — more of a problem with my raised beds than one might think, given that we’re on *two* official Superfund sites.

What’s going on in your garden (planning / prep), this week?