It's been five years and people are still writing stories based on assumption that things Trump spokesmen say have any predictive value. https://t.co/YfCjyeMKzL


you know they’re fucked when the “2 weeks or so” timeframe they usually promise expands to “soon” https://t.co/pDbc25pyKp

Paul Waldman, at the Washington Post — “Trump considers adding a social media network to his list of failures”:

… It’s of course possible that Trumpbook, or Trmpr, or whatever it might be called, will turn out to be as much a figment of the imagination as the spectacular health-care plan Trump kept promising as president. But let’s assume for the moment that this actually comes to pass.

I for one look forward to watching it fail miserably…

For years, we heard that Trump might try to form his own media company, a cable network that would be everything Fox News is, but Trumpier. It never happened, probably because as soon as he started to consider what would be involved, he realized it was just too daunting a challenge.

It would certainly be simpler to start a social media platform, but it’s not something he has any experience in. For him to succeed in a new line of commerce he’d never been involved in before, he’d have to bring around him some smart, competent people who knew a lot about the technical and business aspects of this endeavor.

And his track record on hiring leaves something to be desired. His White House was without doubt the most incompetent in modern times: It leaked like a sieve, it could barely issue a news release that wasn’t full of typos, and he went through four chiefs of staff and seven communications directors.

So who’s going to create and run Trmpr? Jared Kushner? Good luck with that…

That’s why Twitter worked so well for him: Because it’s the place where journalists congregate (along with a few hundred million other people), he could leverage it to achieve much wider attention than simply speaking to the like-minded people who followed him there.

But a platform solely populated by his supporters will probably suffer the same problem sites such as Parler had: With only conservatives in attendance, even those who went there enthusiastically at the beginning didn’t find it all that compelling. If you own the libs on your social media site but no libs are there to hear it, have the libs actually been owned?…

So maybe his ambitions are modest. Rather than starting a platform that will succeed so spectacularly it will drive Twitter out of business and restore Trump to gold-plated glory, he may just want to grab whatever he can get while he can. A bottom-feeding operation meant to squeeze as much money as possible from his most gullible supporters would be completely in character…

Probably a good idea, as he has millions of followers, but…

1) There’s competition from Gab & Parler dividing the audience.
2) There will be no advertising, only subscriptions and donations.
3) It will just be an echo chamber. You can’t troll if everyone agrees with you. https://t.co/OGsQUpIBAe

the service will be named death shart https://t.co/6VcHQBgjRD

Grift then once, shame on Parscale. Grift them twice, lmao

*All* the Trumpist grifters are desperate, apparently:

The main news here is Jason Miller still has a job and I’m guessing despite this he is still way behind on child support owed to @AJDelgado13 https://t.co/GdvVB7K7YU 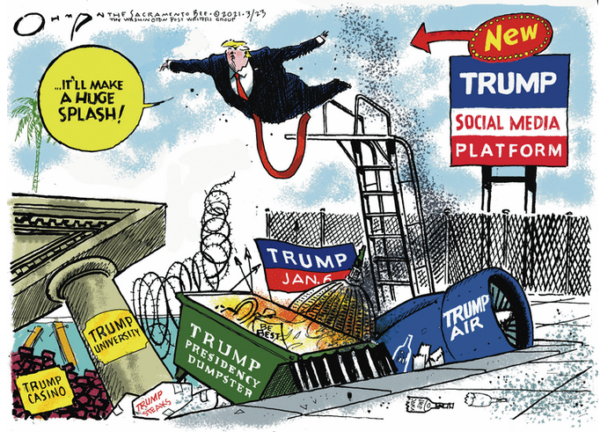 Not Everything Is Terrorism: Boulder, Colorado Mass Shooting Edition
Next Post: I Suppose, Especially Because I Was Asked, That We Should Say a Few Words About Today’s Israeli Elections