You are here: Home / Politics / America / NATO Did Not Agree to Admit Ukraine Yesterday

A whole lot of people got really excited yesterday after some reporters mistakenly reported that NATO had agreed to admit Ukraine. The bottom line is that the English language tweet by Ukrainian President Zelensky about Ukraine and NATO, while accurate, was confusing if you do not understand some of the technical details regarding NATO. This was then compounded when, because they’d been primed by the confusing tweet, people then interpreted President Biden’s remarks within the incorrect framing from Zelensky’s tweet. Here’s Zelensky’s original statement:

Commend @NATO partners' understanding of all the risks and challenges we face. NATO leaders confirmed that ?? will become a member of the Alliance & the #MAP is an integral part of the membership process. ?? deserves due appreciation of its role in ensuring Euro-Atlantic security

The Membership Action Plan (MAP) is a NATO programme of advice, assistance and practical support tailored to the individual needs of countries wishing to join the Alliance. Participation in the MAP does not prejudge any decision by the Alliance on future membership. Bosnia and Herzegovina is currently participating.

The MAP process provides a focused and candid feedback mechanism on aspirant countries’ progress on their programmes. This includes both political and technical advice, as well as annual meetings between all NATO members and individual aspirants at the level of the North Atlantic Council to assess progress, on the basis of an annual progress report. A key element is the defence planning approach for aspirants, which includes elaboration and review of agreed planning targets.

Throughout the year, meetings and workshops with NATO civilian and military experts in various fields allow for discussion of the entire spectrum of issues relevant to membership.

The MAP was launched in April 1999 at the Alliance’s Washington Summit to help countries aspiring to NATO membership in their preparations. The process drew heavily on the experience gained during the accession process of the Czech Republic, Hungary and Poland, which became members in the Alliance’s first post-Cold War round of enlargement in 1999.

Participation in the MAP

Participation in the MAP helped prepare the seven countries that joined NATO in the second post-Cold War round of enlargement in 2004 (Bulgaria, Estonia, Latvia, Lithuania, Romania, Slovakia and Slovenia) as well as Albania and Croatia, which joined in April 2009. Montenegro, which joined the MAP in December 2009, became a member of the Alliance in June 2017. The Republic of North Macedonia, which had been participating in the MAP since 1999, joined NATO in March 2020.

The issue Ukraine has is that since NATO decided in 2008 that Ukraine could join at some future time, provided it met the criteria, is that nothing has really changed since then in terms of Ukraine meeting the eligibility criteria. Here’s NATO’s communique on the subject from yesterday: 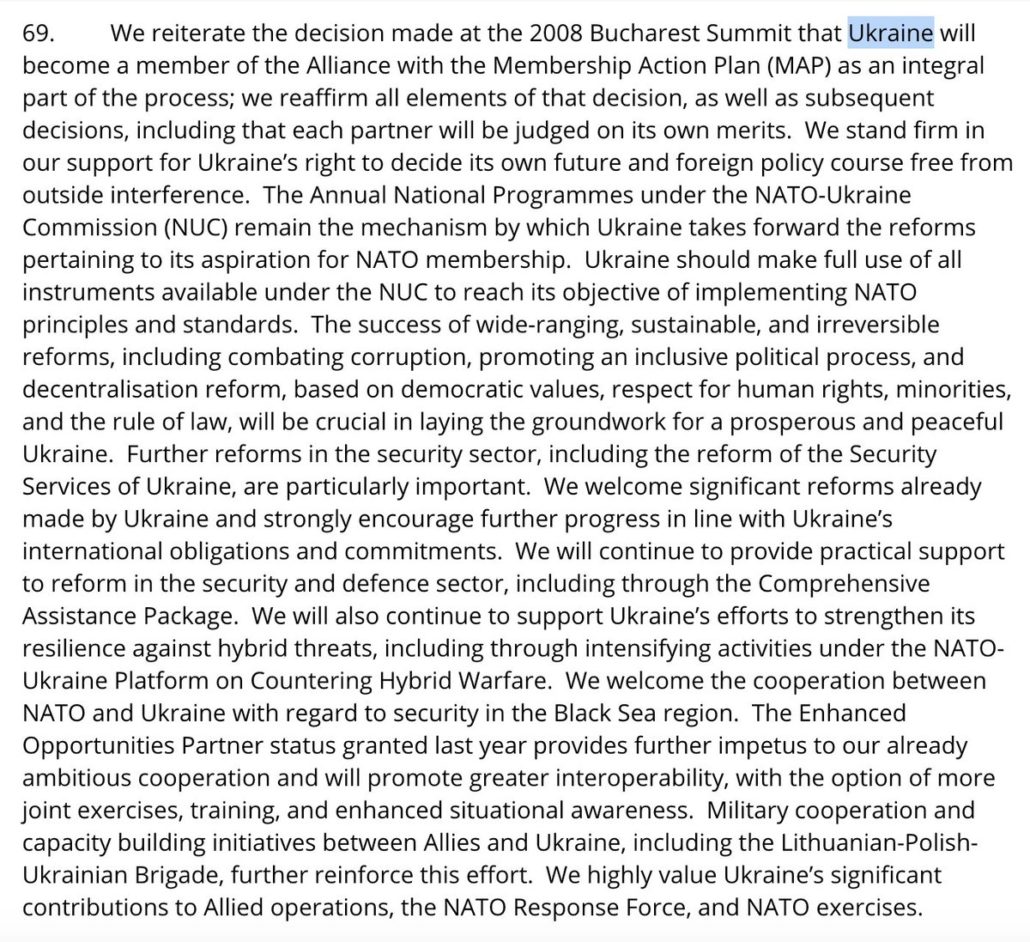 If I might make a suggestion: it might behoove the news media to actually bring a subject matter expert with them on these trips who can explain what the technical language regarding NATO means, or, at least, quickly check with one, before tweeting out breaking news and getting everyone riled up for the better part of a day. Just as it might behoove a front pager to ask for input on what this means from the front pager who actually supervised officers from our NATO partners. Just a thought.