Melania's assistant has to be checking the mail every hour to find this and hide it before she sees it. https://t.co/qO053FMtUY

Robin Givhan, at the Washington Post, is always worth reading:

The August Vogue cover with first lady Jill Biden is a classic. In these partisan times, that is a statement of both optimism and rebuke.

The story, written by Jonathan Van Meter, is a fashion love song and a political treatise. In every turn of phrase, every admiring riff, there’s a subtle excoriation of the previous administration and an unsubtle mash note to the current one. Vogue has a crush on Biden, but her predecessor was never photographed for the magazine during her tenure in the White House…

Biden is only the third occupant of the East Wing to appear on the cover of Vogue, which despite all its recent struggles and missteps in a world more demanding of inclusivity and less tolerant of hierarchies, remains a cultural touchstone. Hillary Clinton was the first presidential spouse on the cover in 1998 and the occasion celebrated her dignity in the face of her husband’s impeachment. At the time of publication, Editor in Chief Anna Wintour told The Washington Post that the goal of the story, for which Clinton posed in a velvet Oscar de la Renta gown, was to “give her her due.” Michelle Obama was the second. She appeared on the cover three times. According to one Vogue headline, Obama was: “The first lady the world’s been waiting for.”

END_OF_DOCUMENT_TOKEN_TO_BE_REPLACED

Santa Cruz, unlike the other islands we’d visited previously, is inhabited. There are plantations in the highlands that have been there since before the park was created, and Puerto Ayora looks like any other tourist spot, with restaurants, hotels, and shops.

END_OF_DOCUMENT_TOKEN_TO_BE_REPLACED 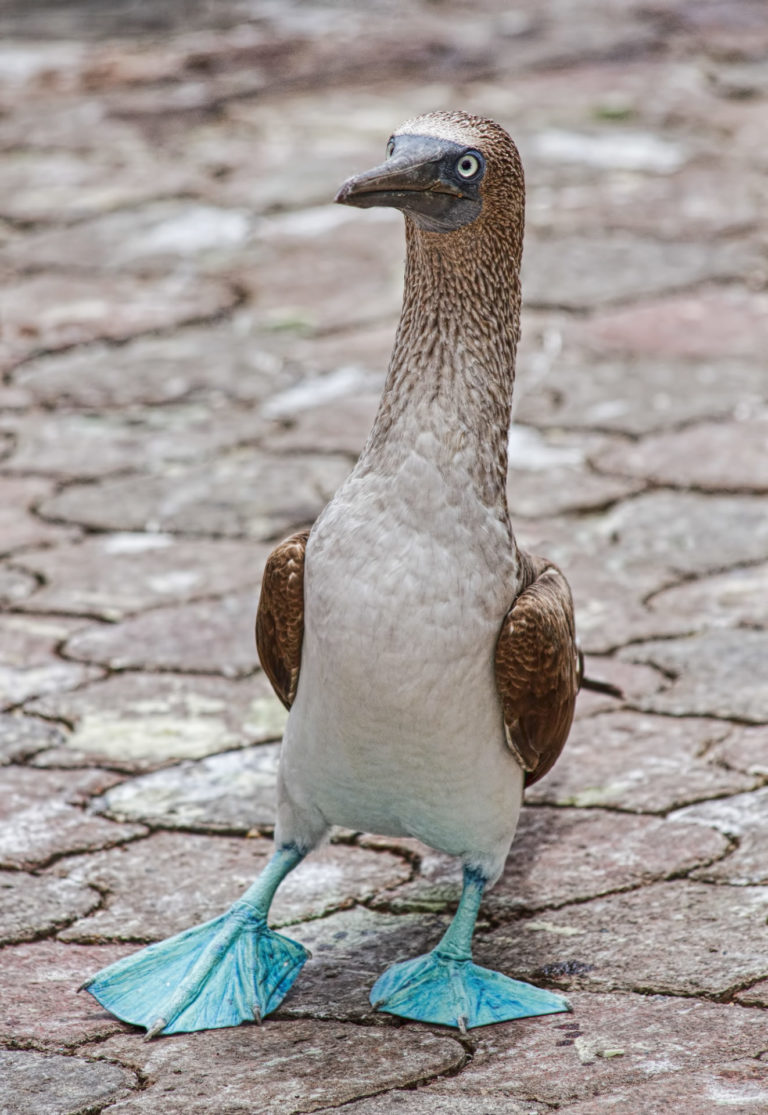 We were told that the fish market in Puerto Ayora was definitely worth visiting. This blue-footed booby clearly thought so as well. I love the “Nothing to see here, folks” attitude while he tries to get close to the fish.

I have been catching the show Crossing Lines on Ovation, and it is now one of my favorite shows, even if it did first air in 2013.

There are 3 seasons of Crossing Lines, 12 episodes per season.  They show 4 episodes every Thursday night and we are halfway through Season 2.  I’m sorry I didn’t think to mention it before, but better late than never, I guess.

They are not afraid to kill off regular characters on Crossing Lines, which adds to the realism, I suppose, but I wish they would check with me first before they decide to kill someone off.  I won’t say more than that, but I hate the spoilers on Google.  You start to type in something innocuous, like “is so-and-so” and they offer the suggestion “is so-and-so really dead?” or “why did so-and-so leave the show?

Google obviously doesn’t care, but I am well on the way to hating them lately.  For a company whose early motto was “don’t be evil”, they are really fucking evil.  Okay, back to TV.

Last week Ovation advertised a series called The Brokenwood Mysteries.   I watched the first episode of the first season this evening, and I think it could be a good show. It’s from 2014 and I had never heard of it.  Has anyone watched it?  If you have, what did you think?

The detective in The Brokenwood Mysteries has a rumpled, disheveled appearance that reminds me of another detective from a show that was on a few years ago.  Backstrom.  I googled to make sure I remembered the name correctly.  Apparently there is a Season 2 of the show after all, but it’s the Swedish version of the show that’s on Acorn, not the US version.  I wonder if that one is any good.

I don’t mind older shows, how about the rest of you?

END_OF_DOCUMENT_TOKEN_TO_BE_REPLACED

This is our last submission in this Paris After Dark series, so starting tomorrow we are back to just the morning OTR for awhile.

After our tour on Normandy in 2014, we took a day trip to Mont Ste Michel, then headed back to Paris. On the way we stopped in Giverny for a few hours.

I’m a bit fuzzy on which part of the site these pictures were taken – the captions are my best guess. They are all from early August that year and they were all taken by my wife who has a better eye, not me.

END_OF_DOCUMENT_TOKEN_TO_BE_REPLACED 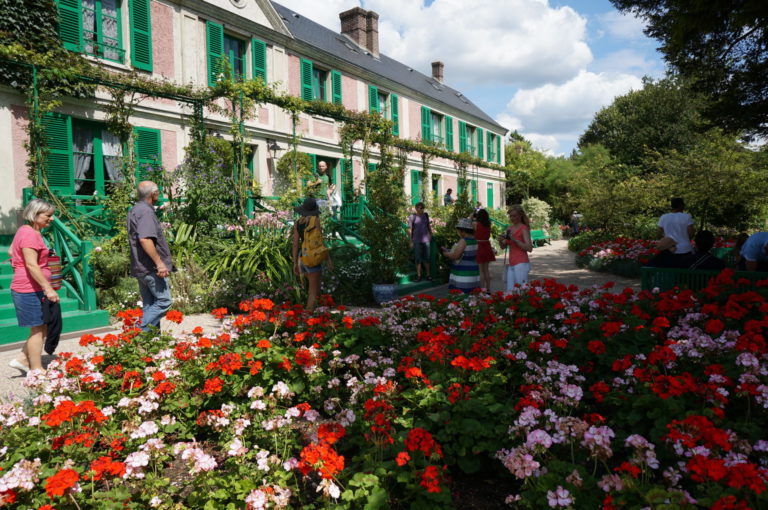 Last night in a comment to Cole’s Thank You All post, former lurker and newest full time commenter – no pressure – CindyH stated:

As a lurker, I’ll come out and say how much I’m going to miss the stories and pictures of such wonderful doggies.

Well, CindyH, we have at least one more Bixby story for you and everyone else: mine!

This should also clear up why TaMara considered asking me to do the post yesterday, because as far as I know, I’m the only front pager who actually met Bixby.

Several of you, okay maybe one of you, okay maybe no one remembers, but way, way, way back in the before times of January 2019 I mentioned that I would be doing a keynote address on information warfare at a conference on information threats in Colorado. That conference was scheduled for April 2019, but got bumped because the resort had over scheduled Spring weddings. So we rescheduled for October 2019. Guess what happened? We had to cancel because forest fires were threatening the resort. And, once again, we rescheduled for March 2020. I bet you can’t guess what happened then???

When I thought I was going to be flying through Denver in April, I told TaMara and asked if she wanted to connect. Instead of flying in Tuesday and out Friday AM, I’d stay through the weekend and fly out Sunday afternoon. If the Avs were playing I’d get hockey tickets, I could meet the dogs and the rest of the menagerie, etc. She said sure. The Avs were not playing that week at home, but when they told me we were rescheduling for October, I checked the next seasons schedule and there was a Friday night home game, so we’re in business. So the beginning of October 2019 rolls around and I’ve been sitting on non-stop round trip tickets to Denver on Southwest. I’ve already done the no charge reschedule once, the woman in charge of the program was basically told to mind her own business by the person handling payments when the former told the latter to reimburse me already, so I wasn’t going to get reimbursed for the airplane tickets I’d paid for back in February, and we’re once again getting rescheduled. To top it all off, I had a sinus infection and I’m just starting the antibiotics. So I feel like crap, I’ve got plane tickets I can’t get reimbursed for, I’ve got hockey tickets I can’t get a refund on, I’ve got a hotel reservation a few miles from TaMara’s I can cancel, I’ve not worked out for four days and I wasn’t going to be able to for two more weeks because of the antibiotics.

I texted TaMara, told her I’d just transfer the e-tickets to her, and she could go see the game with a local friend on me. TaMara, ever pragmatic, texted back I should just change the plane tickets to fly in Friday morning and we’d catch the game, hang out Saturday and Sunday, and I’d fly home. Basically a mini-vacation. So that’s what I did.

Till now this story has not been told. Why you might ask? Because we were afraid John would be beside himself, because I got to meet Penelope Pearl the Duck. I am not kidding… However, TaMara said it was okay for me to tell it now. I won’t post the pictures I took of Penelope Pearl so as not to upset John too much.

I arrive at the airport in Denver, figure out where TaMara is meeting me, and head there. TaMara is driving her plug in hybrid Kona, which is a small SUV. In the back seat is Bixby and Scout. I first give sritchees through the back seat hatch while I’m putting my bags in the back and then I get in the front seat. At this point you can hear the SUV groan. I’m honestly not sure the Kona is rated for two Great Danes and me. And off we go. First stop the Jewish cemetery in Golden to visit my grandparents’ and my aunt’s graves.

Bixby decided he wanted me to know who was in charge. And it wasn’t me despite my sitting up front next to his momma!!!! So what does he do? With his butt still on the back seat he leans over the headrest and puts his head on top of my head and then goes dead weight with it. That’s right we drove for the next 45 minutes with me wearing Bixby for a hat! Or Bixby using my head for a chin rest! After the cemetery we went to a park across the street to exercise Bixby and Scout a bit before heading off for lunch. And, yes dear, gentle reader, I had Bixby’s head on mine all the way to the restaurant. And all the way from there to TaMara’s. It is a very good thing I do neck exercises on shoulder day!

TaMara did stop the car several times to try to get him to stop. But after the third or fourth attempt he clearly wasn’t going to. And it wast just funny.

Did I mention that he drooled? We got to the restaurant – really good BBQ place – and go in. TaMara looks properly put together. I look like I’d just stuck my head in a vat of industrial solvent…

For this to really make sense, for the sheer hilarity of it, you need to understand that despite me being 5’11 and usually weighing between 265 and 275 depending on how clean I’m eating, and at that point since I’d been ill and hadn’t been working out, I was probably up around 280, Bixby’s head was still bigger than mine! To give you some idea of the relative sizes, here are some pictures. This first one is from Saturday morning at TaMara’s when Bixby and Scout wanted attention before we headed off for the day. I appreciated TaMara preserving my secret identity by how she framed the picture. 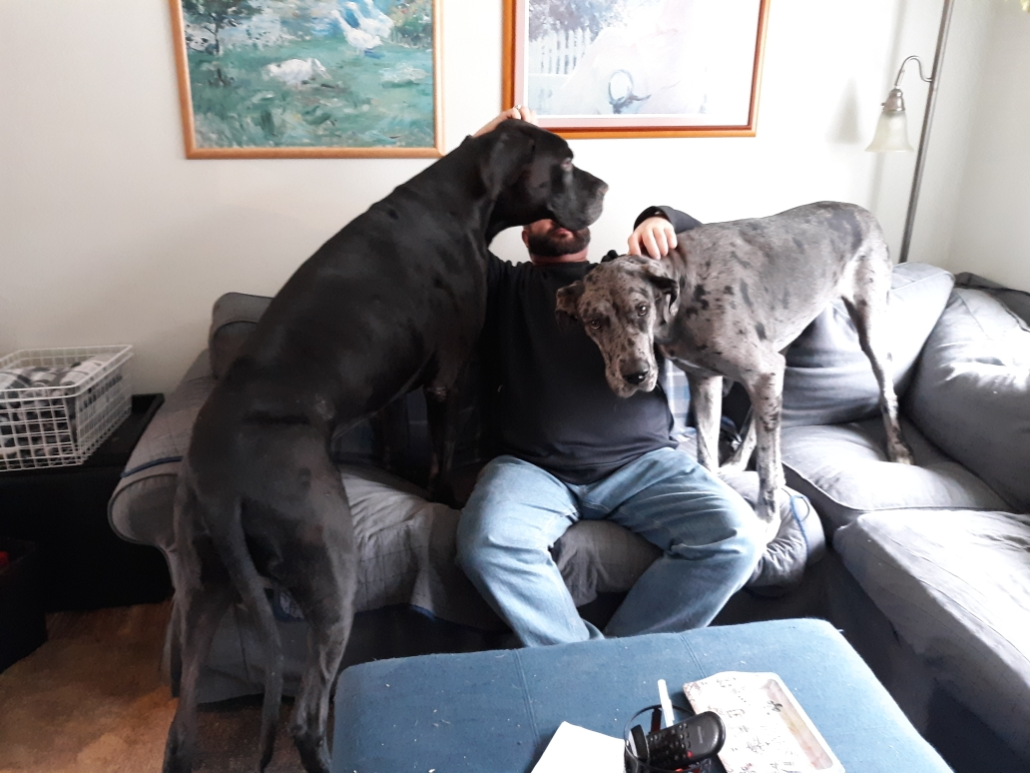 This second picture was actually taken on Friday night after dinner. I’ve made a slight revision to it to preserve my secret identity. Let me know in the comments if you can tell. 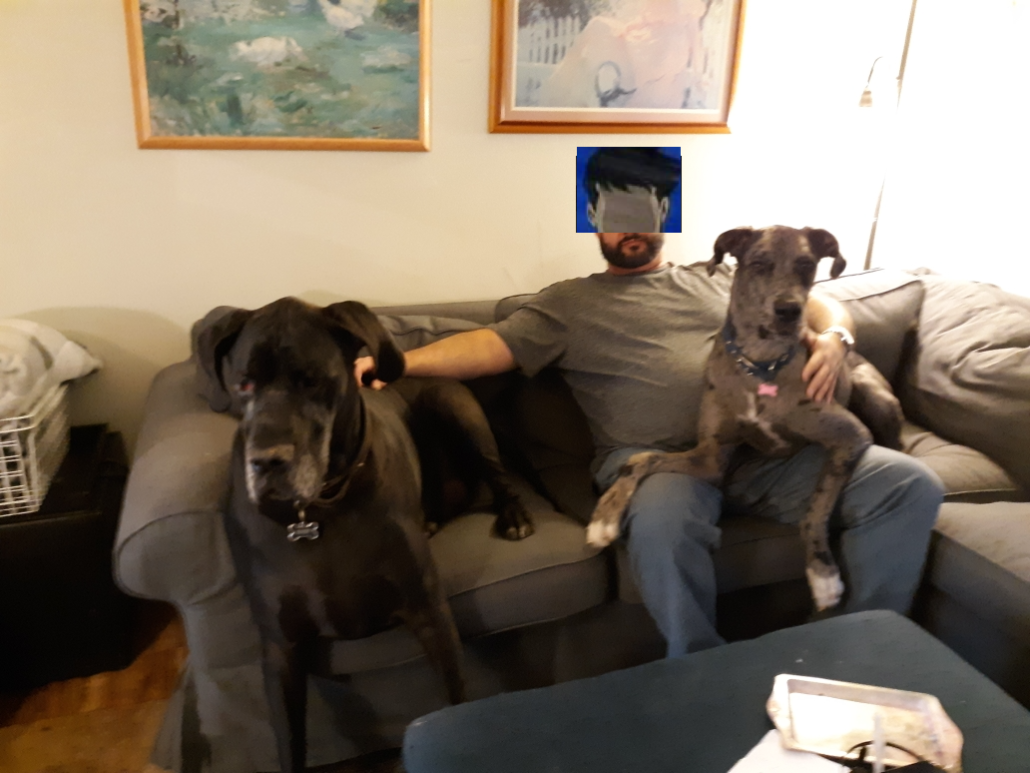 I think you get the idea just how big Bixby was. Imagine, if you can, having Bixby use your head as a chin rest all afternoon.

And that is my Bixby story!

He was a very big good boy!

PS: If you’re wondering who the Avalanche played that night, it was the Mighty Ducks. Because that just makes sense given the rest of the story.

END_OF_DOCUMENT_TOKEN_TO_BE_REPLACED

it is absolutely astonishing how these fash keep showing up embedded in the republican party. the world’s unluckiest political organization. https://t.co/kCKyVJ8ZAr

Too many older white people think that if they can't define America like they want, then they don't want America

And not just the ‘older’ white people…

NOBODY tells Paul Gosar not to cavort with white nationalists. https://t.co/KFAXhQYpHa

"David Duke without the Baggage" https://t.co/5MGolsNQkK


(‘David Duke without the Baggage’ was Scalise’s own self-description.)

Nick Fuentes is an open admirer of fascism and Republicans will do nothing to punish Paul Gosar over this collaboration.

I feel like despite the chatter about how bad the GOP has gotten we haven’t processed what a radical transformation this is for America. https://t.co/nCjt1B7ZV7