You are here: Home / Politics / America / The Wilderness of Mirrors & The Guardian’s Scoop Regarding Putin’s & Russia’s Planning To Make Trump President: It Is Almost Certainly Disinformation & Agitprop, But It May Still Be True

Several of you asked in comments yesterday morning what I thought about The Guardian‘s big scoop based on purported leaked Kremlin documents from January 2016 that supposedly reveal the formal planning by Putin and his intelligence and nat-sec leadership to make Trump president. As I was typing this up last night, Cheryl was doing her post and we agreed that I’d just finish drafting mine and save it for later as we are in almost complete agreement about The Guardian‘s reporting.

Since it’s now later, I figured I’d freshen it a wee bit and hit publish. Everything up to the Updated on 16 July at 2:00 PM EDT was written yesterday.

This is certainly disinformation agitprop, in that what leaked is accurate in its contents, but not the real thing. Which allows Putin to both finally take credit for the op he’s been running informally since 2014 and formally since 2016 and also further that operations objectives of sowing socio-political discord in the US.

To clarify and be more specific, this is almost certainly disinformation and agitprop. While it is also most likely accurate in the contents in terms of the underlying facts of 2016 – as in Putin did have a preference for Trump and was utilizing his resources to elevate his candidacy and his chances – there is no way that this leaked Kremlin document is legitimately documenting whatever planning was going on in 2016.

The reporting in The Guardian Luke Harding, Julian Borger, and Dan Sabbagh is interesting, but… The report that the document:

I have a lot of trouble believing that it wasn’t classified, according to the classification that the Kremlin uses, at the equivalent of what we would refer to as a fully compartmented classification at the highest level of classification.

Another issue I have is they don’t post the entire document, only two screen grabs extracts. Nor do they indicate the chain of transmission to them. They sort of intimate or suggest they got it from a western intelligence source, but the way they write the article, it could also be inferred it came from a Kremlin source.

One thing that is clear, is that if a western intelligence agency, one of our Five Eyes partners or one of our other intelligence partners, has had this for a while, they certainly did not share it with the US prior to, at least, late 2019. As both Matt Tait aka Pwn All The Things and Marcy Wheeler note.

Perhaps you might suppose the IC did have it for far longer than months. But we know they didn't have it at least by January 2017 because of this paragraph in the 2017 IC assessment: pic.twitter.com/aXdECPMJtK

We know they didn't have it when HPSCI and SSCI reviewed that assessment either, so 2019?https://t.co/CZxtTdWOz1

I would also like to know which, if any, other major news organizations were offered this and refused to run it because they couldn’t vet it to their satisfaction.

Finally, Ivan Tchakev, who is the economics editor at RBC and writes as an expert at Riddle, is asserting that language errors indicate this is most certainly a forgery.

What is the most preferable and scientific way to distinguish between fake and authentic text? Language. @guardian has posted small extract from the Kremlin document presumed to be authentic. I have counted 4 linguistic errors and a couple of dubious instances of word usage. /1 https://t.co/Z5vWrjErww pic.twitter.com/S5QVMG4ovz

So, with a considerable degree of confidence I can assume this is either “Google-translated” text from foreign language to Russian or a text composed with help from an unschooled Russian speaker, or both. It would be interesting to look at other original “documents”. /3

Since I don’t speak Russian other than the names of some foods, some place names, several curses, and the names of hockey players and some authors, composers, and dancers, I asked our own in house Russian language and Russian studies subject matter expert about Tchakev’s analysis and got this reply:

I don’t think you can really draw conclusions based on a linguistic analysis. Bureaucratic language is terrible everywhere, including in Russia.

Based on the language, it kind of looks fake to me but I could not swear to that in court! I’m not all that familiar with these kinds of documents. I just get a whiff of somebody playacting.

So hopefully everything is now clear as mud!

Marcy Wheeler makes the excellent, and if you’ve been following along as Cheryl and I have covered this stuff here and as Wheeler and others have covered it on their sites and feeds, obvious point that Putin’s active measures and low intensity political warfare operation precedes January 2016.

That is, it seems like the story you'd tell if you wanted to shift the timeline for some reason. "Hey! Let's make pretend it happened at that Moldova meeting!"

As we’ve discussed here numerous times, we can actually see the disinformation and agitprop operation begin in the spring of 2014. It was at this point in May of 2014 that the first story intended to dirty up potential presidential candidates was placed in Russian state news RIA Novosti. That disinformation and agitprop drop was targeted at President Biden, Ambassador Kerry, and Vice President Cheney by targeting their children as engaged in unethical and potentially illegal activities in Ukraine and other places. All three of them were being touted in 2014 as potential presidential candidates for 2016, though none of them ultimately ran. 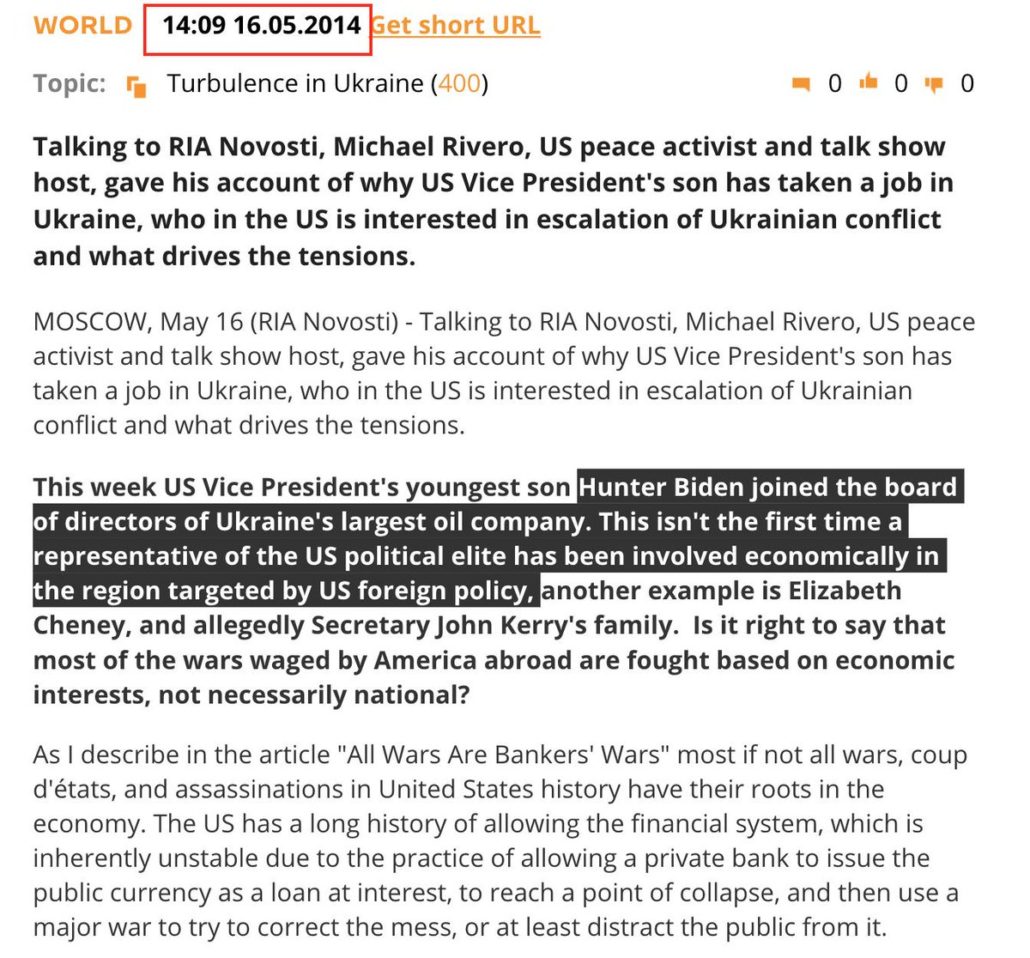 The Jade Helm conspiracy theory of 2015, intended to stir up discontent among Texas against both the Obama administration and US Special Operations Forces, was also part of Russia’s active measures campaign. It was tied to Russia’s promotion of the Texas secessionist movement during President Obama’s second term, as well as support for a variety of American neo-NAZI and white supremacist groups. The plot to infiltrate and influence the National Rifle Association actually begins even father back. Torshin attended his first NRA national convention in 2012 and by 2014 he had Maria Butina in place and active in the US. Similarly, Russia has targeted the National Prayer Breakfast for years as a line of entry into the Republican Party and conservative organizations. Russia has also targeted a number of American evangelical groups. One of the key players in this is Jay Sekulow, who just happened to be Trump’s personal attorney for the Mueller investigation and both impeachments. This much coincidence takes a lot of work. The idea that suddenly, in January 2016, Putin convenes the equivalent of a National Security Council Principal’s meeting to plan and coordinate efforts in his active measures and low intensity political war against the US just doesn’t line up.

As I wrote yesterday, what I want to know now is where the document came from, which, if any of our ally’s intelligence services had it and provided it to The Guardian‘s reporting team. Or, if it wasn’t provided, what’s the chain of transmission in it leaking to them. And I want to see the whole document, with the appropriate redactions that would be necessary to protect anyone who leaked it out. Without all of that, this is interesting. It rings true. But it is clearly disinformation and agitprop intended to further wreak havoc on American society and politics.