You are here: Home / Anderson On Health Insurance / Plan domination and subset networks

I’ve been on a kick about dominated plan choice as I believe that the ACA choice environment is messy and chaotic and can lead people to make expensive errors that significantly lowers the value of the product that they buy leading to either more expenses in both premiums and cost-sharing and potentially deferring care.  In both the Milbank Quarterly and JAMA Health Forums articles, my co-authors, Drs. Petra Rasmussen and Coleman Drake, and I used a strict definition of domination.  We defined a dominated plan as one where there was another plan offered by the same insurer with the same plan type on the same network that offers the same or lower net premium and better benefits.  We defined a plan as not dominated if there was another plan with the same or lower premium, the same benefits, less restrictions on utilization and a multiple subset networks offered by the same insurer.  Partially this was a reflection that the scenario in the previous sentence won’t show up in our data from Covered California, and partially as a means of analytical simplification.  We would need to know institutional details about every insurer in the country that runs two or more networks to make this evaluation.  Our definition is therefore probably too tight and thus we probably under-estimate the prevalence of dominated plan choices in the ACA.

I want to pull up an example from my former employer, UPMC Health Plan which is based in Pittsburgh.  UPMC Health Plan builds their ACA products in one of three networks; Partner (very narrow) Select (somewhat narrow) and Premium (broad).  They then attach either an Exclusive Provider Organization (EPO) plan type (no PCP gatekeeping and no out of network benefit) or a Preferred Provider Organization (PPO) plan type (no PCP gatekeeping and an out of network benefit).  From here the network-plan type combination is then attached to a few benefit designs for each metal level.  We’re going to look at a Bronze plan that costs a hypothetical enrollee $1 per month for the 2021 plan year with a screen shot from HealthSherpa.com.

We see that UPMC Bronze 6700 is the same cost-sharing benefit design across three different networks, on a pair of EPOs and one PPO. 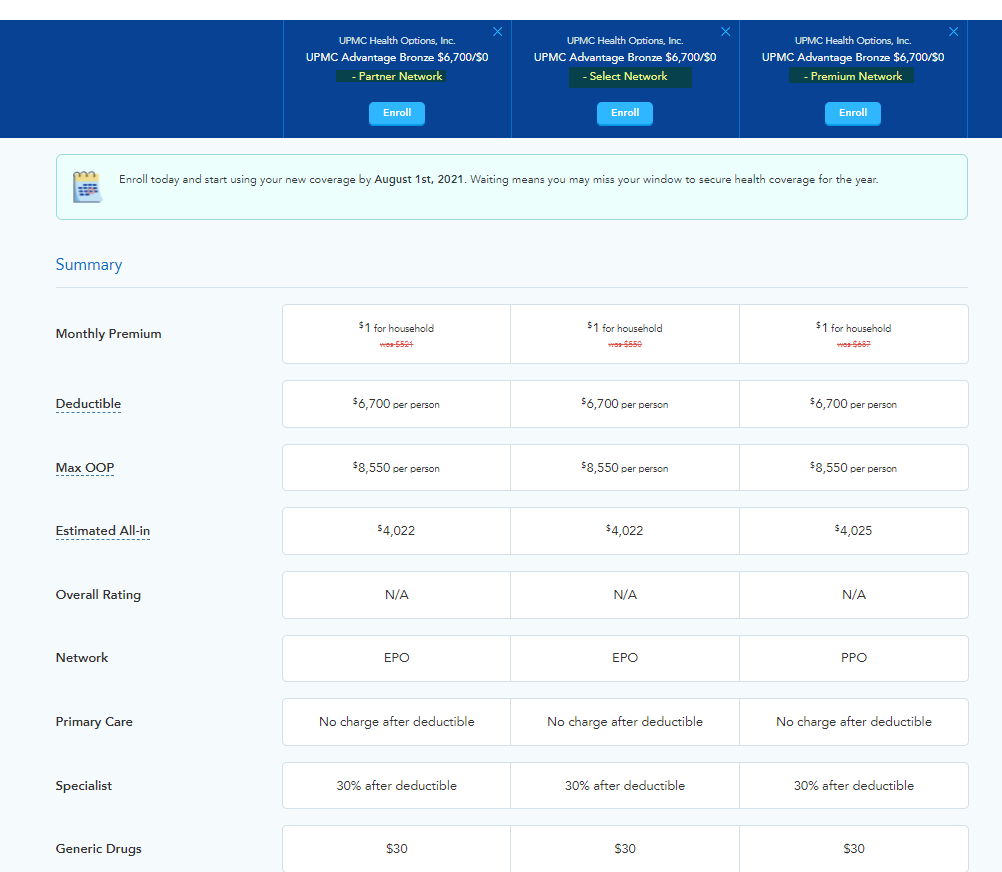 As a patient, I value network breadth in two ways.  The first is the immediate use value.  Is my doc in network?  Is my preferred hospital in network?  Bigger may or may not be better in terms of use value.

The second way a patient values a network is the option value — if I get hit by a meteorite, will a doc that I don’t need now but would need in the off-chance scenario be in network?  For some people, option value is high.  For other people, it is very low, but it is always positive and not zero.  Bigger is better in regards to an option value of a network.

HOWEVER, I think that in this case, UPMC Advantage 6700/Partners is a dominated plan.  The premium, cost-sharing and plan type (EPO) is the same compared to UPMC Advantage 6700/Select but the Select variant has all of the docs in Partners which means use value is at least the same plus  some more docs  and hospitals which means option value of the network is slightly greater.  The Select variant has higher option value of the network than Partners.  Select dominates Partners in this scenario (with the assumption that Partners is a pure subset network of Select)!

UPMC Advantage 6700/Partners and UPMC Advantage 6700/Select are both dominated pragmatically by UPMC Advantage 6700/Premium.  The premium and cost-sharing are the same.  Assuming Select is a subset network of Premium, Premium has superior network option value than Select or Partners.  Premium also has the same PCP gatekeeping requirement (none) and an out of network benefit as a PPO compared to an EPO.  Premium wins on two factors and ties on all others.  It dominates.

So what does this mean?

I think that we underestimate the number of individuals who could be defaulted or choose strictly dominated plans once precise insurer-specific institutional knowledge is applied.  ‘

This is a quick and dirty analysis based on stale institutional knowledge.  Very precise and current institutional knowledge is needed to do an actual assessment of impact.  Furthermore, we probably need to figure out just how much option value people actually hold of a network relative to the effort to make these changes.  We also would like to know if a pair of networks where the small network is a fuzzy subset where it has one extra chiropractor on the other side of the state compared to the bigger “parent” network is functionally considered a subset network or a distinctive network.  There is a lot to scratch at, but I am confident that the three of us have at the very least established a very plausible lower bound of the problem of dominated plans on the ACA individual marketplaces.