As of July 19, more than 186.3 million people have received at least one dose of a #COVID19 vaccine. Of those, more than 161.4 million are fully vaccinated. Once you’re fully vaccinated, you can do things you stopped doing because of the pandemic. More: https://t.co/zYLe3H12re. pic.twitter.com/JZ0uZJO83E

they won’t resign their commissions but the armed forces would be immeasurably improved if these officers did. i’m rooting for it. https://t.co/oIvxivZPK3

fox and the GOP are explicitly trying to create a fifth column of pro-trump dissenters inside the military and a vaccine mandate would be a great way of smoking people susceptible to that out of the service https://t.co/CISdbiazyC

A COVID vaccine mandate for military servicemembers is a matter of when, not if. Mass-resignation threats by Fox-addicted Colonels are just as bullshit as when they threatened to do so over DADT repeal as Fox-addicted Captains. But I'd hope they follow through anyway. Win-win.

there is an alternate universe where everyone who could get the vaccine did so, and it's a much happier place

More than 4,088,000 people have died from the coronavirus worldwide. An estimated 190 million cases have been recorded https://t.co/lJ6wFKJ1zY 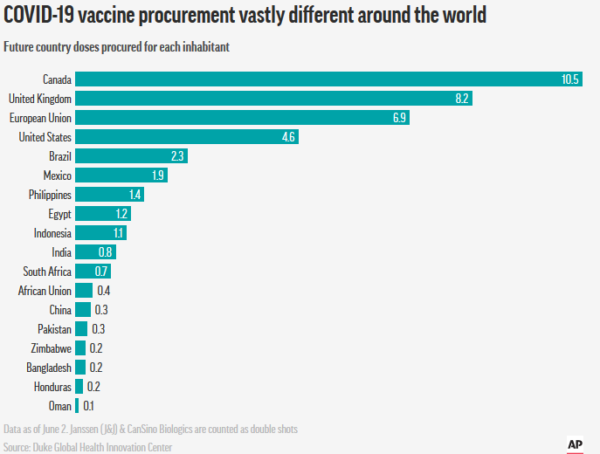 Comprehensive research estimates India’s excess deaths during the pandemic could be a staggering 10 times the official toll, between 3 million to 4.7 million. Most experts already believed India’s official toll of 414,000 dead was a vast undercount. https://t.co/mx00PVnXj4

South Korea’s prime minister has offered a public apology over a large-scale coronavirus outbreak on a destroyer on an anti-piracy mission off East Africa. A total of 247 of the destroyer’s 301 crew members have been confirmed to have contracted COVID-19. https://t.co/X1sLklAuyc

… The outbreak aboard the destroyer Munmu the Great is the largest cluster South Korea’s military has seen. A total of 247 of the ship’s 301 crew have tested positive for COVID-19 in recent days and two military planes had to be dispatched to fly them all home.

None of the destroyer’s crew had been vaccinated because they left South Korea in early February, before the start of the country’s vaccination campaign…

The outbreak on the destroyer comes as South Korea is battling its worst surge of the pandemic at home.

On Tuesday, South Korea reported 1,278 new virus cases. It was the 14th day in a row that South Korea has reported more than 1,000 new cases.

Since the pandemic began, South Korea has reported 180,481 infections and 2,059 deaths.

Myanmar's military-controlled health ministry expects half of the population to be vaccinated against COVID-19 this year, state media reported, a day after authorities announced a record tally of coronavirus deaths https://t.co/Roq6aO2zvr pic.twitter.com/29lzxHZjs6

For the second time in two years, Muslims around the world are observing the major Islamic holiday of Eid al-Adha, or the “Feast of Sacrifice," in the shadow of the coronavirus pandemic. By @MariamFam. https://t.co/oMuG0riwPy

Scientists believe that Russia has reached 60% herd immunity through a combination of vaccines and infections as the country struggles to increase vaccination rates amid a deadly Delta variant-driven surge in the pandemichttps://t.co/IhsBFa4Vkt

… The region is seeing a million new infections about every eight days and has reported nearly 1.3 million deaths since the pandemic began…

Europe remains one of the worst affected regions world-wide and has reported 27% of global cases and 31% of global deaths.

Russia, the worst-affected European country, is on the verge of crossing 6 million cases…

France requiring 24-hour negative Covid test for some European arrivals. Travelers from the United Kingdom, Spain, Portugal, Cyprus, Greece and the Netherlands are subject to the new rule https://t.co/jukeMtxmLj pic.twitter.com/BX0SdSHduf

Effective September 7, 2021: gov intends to open Canada’s borders to ANY fully vaxxed traveller. Fully vaxxed means has received a full course of doses of any of the four approved vaccines in Canada, more that 14 days prior to arrival. /3 #cdnpoli #travel #border #CanadaUS

NEW: A key scientist who signed the letter calling for investigation into the lab leak theory now says a natural origin "is the most likely scenario by a long shot."

It's based on his own analysis of where the first cases were found. (by @FoodieScience)
https://t.co/BV7lzGR8gg

But two things have swayed him that the market is (again) the most likely origin.

1. Initial cases clearly radiate out away from the markets, not the lab.

2. A newly published paper shows numerous live animals were being sold in the market…https://t.co/sh3g3dmwQC

"There's still that lingering perception that 'I am young, I am strong, I can fight this thing off,'" @MSchochSpana said.

"So there's that youthful sense of invincibility that was reinforced early on when we had less vaccine available." https://t.co/SPi5BaT0GR

Coming up on @NBCNightlyNews, our look inside a Covid unit at UF Health in Jacksonville as Florida now accounts for roughly 20 percent of all new daily infections nationwide.

“This is insane,” one nurse tells us. pic.twitter.com/MBU6uSMBaY