You are here: Home / Healthcare / COVID-19 Coronavirus / Well No One Told Me About Her, the Way She Lied

On top of everything Mistermix said about that shitlord Steve Scalise turning around and getting vaccinated, the reality of the matter is IT’S TOO FUCKING LATE to get vaccinated in the hot zones. They are already at critical mass. Having political leaders try to convince people to get there vaccine now in those areas of Alabama and Mississippi is the equivalent of researching smoke detectors while the fire inspector is sifting through the ashed of your house trying to determine if it was arson.

I mean maybe, just maybe, if those states went into total lockdown with mask mandates and everything else, including generous subsidies to businesses and workers to get them to stay home, coupled with a rapid deployment of mobile vaccine stations and complete willingness of the entire population to get vaccinated, they could get away with only the already baked in carnage of the currently infected and hospitalized and minimize the bloodbath. But even if everyone got vaccinated today, they would need a second shot in two weeks, then two more weeks to build up resistance, so a month from now they might be in a better place.

BUT NONE OF THAT IS GONNA HAPPEN, and now we just sit and watch the hospitalizations skyrocket as they are: 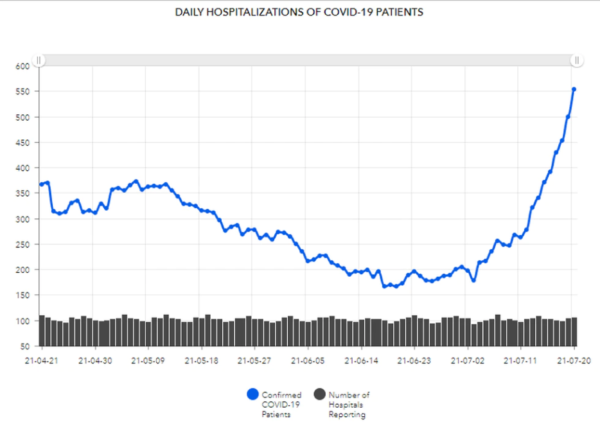 So yeah, Mr. Motherfucker Steve Scalise, it’s too late to say your sorry.

Previous Post: « Tokyo 2020 Open Thread: The Asterisk Games Begin
Next Post: If a Picture Paints a Thousand Words, Then Why Can’t I Paint You? »