Buying health insurance on the ACA marketplaces is tough.  It  is tough under the best of situations as it involves, for most people, a lot of probabilities and estimates of future likelihoods and unknowns with little certainty.  It is tougher when attention span is spammed and hacked.

I was looking at the offerings in Denver, Colorado last night for a quick check on another topic, but I saw the following on the first page of silver plans: 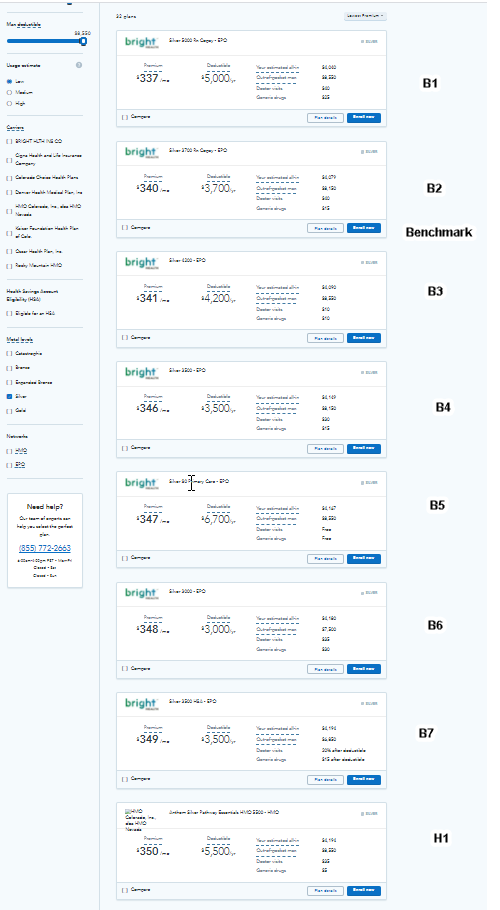 There are a total of 41 silver plans being offered in Denver County.

Bright Health Plan offers the cheapest silver. They also offer the benchmark, second least expensive silver plan. And then they offer another 5 plans before the first plan offered by another insurer.

Bright is unlikely spending significant resources to design plans for optimal plan choice and risk segmentation. Or at least that is not the only likely motivation.

Instead, I think that there is an attempt to spam buyers attention spans. The first seven plans are from Bright. Most of the first page of results are from Bright. Since buying insurance is not an inherently pleasant task, the extra options hack attention and could plausibly discourage individuals from further searching as the next result is more of the same, and the result after that is more of the same.

I’m only picking on Bright as I was looking at Denver for something else last night. This is not an uncommon strategy to both dominate the benchmark premium and increase the search costs for buyers who are overwhelmingly likely to buy just on price and want the shopping experience to be done with as quickly as possible. It is likely a profitable strategy for Bright and other spammers but it is quite plausible that is leads to choice errors on the part of buyers.

Previous Post: « Tuesday Morning Open Thread: The Road Goes Ever On
Next Post: The 1/6 Select Committee Begins Its Work (Part One of… Many) »