A wild scoop: A GOP lawmaker has been trying to travel to *Taliban-controlled Afghanistan* in a rogue evacuation mission despite efforts by the Pentagon & State Dept to discourage him. Officials are unsure of his current whereabouts. From @tylerpager & me https://t.co/MpieNxGNTU

The call to the U.S. ambassador to Tajikistan came in Monday. On the line, two U.S. officials said, was Rep. Markwayne Mullin (R-Okla.) with an unusual and urgent request: He needed assistance in transporting a huge amount of cash into the country, saying he was going to neighboring Afghanistan to rescue five American citizens, a woman and her four children, stuck in the country. They planned to hire a helicopter for the effort.

Mullin told the embassy that he planned to fly from Tblisi, Georgia, into Tajikistan’s capital, Dushanbe, in the next few hours and needed the top diplomat’s help, according to the two U.S. officials familiar with the incident, who spoke on the condition of anonymity to disclose private conversations about a sensitive matter.

The answer was no. Embassy officials told Mullin they could not assist him in skirting Tajikistan’s laws on cash limits on his way to visiting one of the most dangerous places on earth.

Mullin was outraged by the response, the officials said — threatening U.S. ambassador John Mark Pommersheim and embassy staff and demanding to know the name of staff members he was speaking with.

The episode marked Mullin’s second attempt to travel to Afghanistan in as many weeks for an unauthorized evacuation effort despite the perilous security environment. Last week, Mullin traveled to Greece and asked the Department of Defense for permission to visit Kabul. The Pentagon denied Mullin’s request, an administration official said.

Mullin’s behavior has alarmed top U.S. officials who say he has gone to extraordinary lengths to defy U.S. warnings. The attempt follows an unauthorized trip to Afghanistan by Reps. Seth Moulton (D-Mass) and Peter Meijer (R-Mich.) last week, which Pentagon and State Department officials criticized as a public relations stunt that sapped government resources during a national-security crisis.

As of late Tuesday, U.S. officials said they were unsure of Mullin’s location. Mullin’s office did not respond to multiple requests for comment…

Mullin, 44, grew up in Stilwell, Okla., where he was a standout wrestler and earned a scholarship to Missouri Valley College. Injuries derailed his athletic career, and at age 20, he took over his father’s plumbing business. He was also briefly a professional mixed martial arts fighter, and after being elected to Congress in 2012, he became known on the Hill for leading intense workout classes. A member of the conservative Republican Study Committee, Mullin voted against the certification of the 2020 election results.

Unlike Moulton and Meijer, Mullin did not serve in the U.S. military. He has been an outspoken critic of the Biden administration’s exit from Afghanistan…

Markwayne used to constantly wander into our legislative office because the door was next to his personal office and he got confused. Not the guy I would choose for this particular op.

Dunno, Mr. Malone — Mullin might not be the most useful choice, but he’s certainly representative of his particular party’s stance here…

END_OF_DOCUMENT_TOKEN_TO_BE_REPLACED

As the remnants if Ida sweep through my neck of the woods, it has been raining like crazy all day and, as you can see, there are already two inches of standing water and we have a couple more days of this ahead of us: 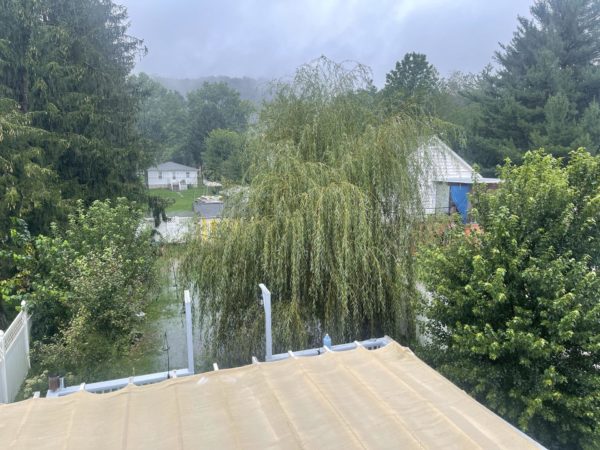 I think I am gonna need another willow.

END_OF_DOCUMENT_TOKEN_TO_BE_REPLACED

Why writing was *really* invented:

one of those moments where you absolutely feel the kinship of all human beings every where and at all times https://t.co/4lOwUTe8Jg

Some thousands of years from now, (not necessarily human) archaeologists will be painstakingly recreating email messages from mid-level managers of the Greater American Empire complaining about water allocation paperwork in the not-yet-undersea Californiate territories…

END_OF_DOCUMENT_TOKEN_TO_BE_REPLACED

What a day we had yesterday.  We are out of Afghanistan.  Finally.  With very little loss of life.  I’m fairly convinced that this would not have been possible under any other president.

The President is scheduled to speak to the nation today at 2:45 Eastern time.

I want to thank our commanders and the men and women serving under them for their execution of the dangerous retrograde from Afghanistan as scheduled – in the early morning hours of August 31, Kabul time – with no further loss of American lives. The past 17 days have seen our troops execute the largest airlift in US history, evacuating over 120,000 US citizens, citizens of our allies, and Afghan allies of the United States. They have done it with unmatched courage, professionalism, and resolve. Now, our 20-year military presence in Afghanistan has ended.

Tomorrow afternoon, I will address the American people on my decision not to extend our presence in Afghanistan beyond August 31. For now, I will report that it was the unanimous recommendation of the Joint Chiefs and of all of our commanders on the ground to end our airlift mission as planned. Their view was that ending our military mission was the best way to protect the lives of our troops, and secure the prospects of civilian departures for those who want to leave Afghanistan in the weeks and months ahead.

I have asked the Secretary of State to lead the continued coordination with our international partners to ensure safe passage for any Americans, Afghan partners, and foreign nationals who want to leave Afghanistan. This will include work to build on the UN Security Council Resolution passed this afternoon that sent the clear message of what the international community expects the Taliban to deliver on moving forward, notably freedom of travel. The Taliban has made commitments on safe passage and the world will hold them to their commitments. It will include ongoing diplomacy in Afghanistan and coordination with partners in the region to reopen the airport allowing for continued departure for those who want to leave and delivery of humanitarian assistance to the people of Afghanistan.

For now, I urge all Americans to join me in grateful prayer tonight for three things. First, for our troops and diplomats who carried out this mission of mercy in Kabul and at tremendous risk with such unparalleled results: an airlift that evacuated tens of thousands more people than any imagined possible. Second, to the network of volunteers and veterans who helped identify those needing evacuation, guide them to the airport, and provide support along the way. And third, to everyone who is now – and who will – welcome our Afghan allies to their new homes around the world, and in the United States.

END_OF_DOCUMENT_TOKEN_TO_BE_REPLACED

As a sort of companion piece to Mister Mix’s post downstairs about the lunatic protestors who are interfering with hospital operations, I want to note that just as they were on 1/6, hard-right nutjobs nationwide are being wound up and pointed at perceived political enemies, often directly by GOP elected officials/candidates. Here are two recent examples of Republican fascists exhorting supporters to overthrow the government, one at the schoolboard level and one at the federal:

This fascist isn’t an elected official yet and one hopes he never will be. But he’s just a loopier version of Florida Governor Ron DeSantis, who is currently using the power of the state to punish schoolboard members who voted for mask mandates, even after a judge ruled that DeSantis lacks the constitutional authority to ban mask mandates.

END_OF_DOCUMENT_TOKEN_TO_BE_REPLACED

These are pediatricians practicing at a local hospital. Obviously, these are violent protests and the protesters should be arrested, but they won’t be, for a variety of reasons. The first reason is that they’re white. I assume the other reasons include the demonstrated inability of the police to stage a moderate response to a protest, as well as the hospital’s desire to avoid bad publicity. And did I mention that the protesters are white?

The same goes for the loud anti-mask mobs at school board meetings. They should be escorted out by security as soon as they yell over everyone, but they aren’t. Instead, meetings are being cut short.

Ignoring these people will not make them go away. Protestors at BLM marches go there prepared to be arrested. I’ll bet you that most of these people go to these protests with the same attitude as the 1/6 protesters, who are shocked when they receive consequences. Of course, the consequences that the 1/6 protesters have received so far pale in comparison to the average of 27 months that BLM protesters received. But at least being arrested and booked might deter some of these loudmouths. Our teachers and healthcare workers deserve it.

END_OF_DOCUMENT_TOKEN_TO_BE_REPLACED 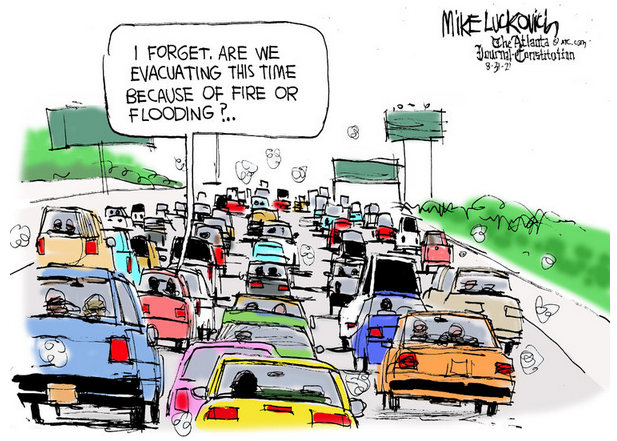 Lest we forget (as if that were possible)…

Only twice in California history, a fire official says, have wildfires burned from one side of the Sierra Nevada mountains to the other. Both erupted this summer, and the latest is bearing down on Lake Tahoe. https://t.co/UsovI7gmIw

As ever, BJ community — check in when and how you can. Suggestions on how to help, with donations or by volunteering, always welcome.

It’s just hitting me now that a category 4 — wouldn’t surprise me if it’s a 5 on post-evaluation — hurricane just hit us and the levees held. And let me tell you: this sudden sense of relief. Whew.

Officials said a $14.5 billion system of levees, flood gates and pumps worked as designed and stood up against a lashing from Hurricane Ida, sparing New Orleans from the catastrophic flooding seen 16 years ago in the wake of Katrina https://t.co/Ot46CbiZLn pic.twitter.com/88j1DYNNUU

Hurricane Ida knocked out all eight transmission lines that deliver power to New Orleans, leaving the entire city without electricity. Some of the hardest-hit areas won’t see power for weeks. https://t.co/705yoiWm8O

No power. Sewage out. No water. Nearly 1 million structures in Louisiana affected. It’s 89 degrees there as I type this. Jefferson Parish estimates 20 days to restore power. We haven’t heard from any crew member west of Orleans Parish. No cell/internet. Why isn’t this trending?