You are here: Home / Politics / Crazification Factor / It Can Happen Here

I, like many here, have said that we’re in an existential moment for the Republic. But I’ll confess that for all the cynicism and world-weariness I’ve accumulated over the years of Trump and the GOP’s steady turn towards authoritarianism, I still held on to the delusion that the US really had a robust immune system when it comes to explicit, overt fascism.

Adam Silverman has, of course, been trying to warn us all, me included, that this is in fact a delusion. That we’re in a low-intensity but real war for the direction and soul of the United States, and that by many measures, we’re in a bad position to fight that war.

The last few days have finally tipped me over.

One of America’s two political parties is not just cheating to try to win elections, but has accepted/adopted the basic tropes that have driven European fascism since the 20s, and we need to be prepared not just for electoral battle but, perhaps, for much worse. 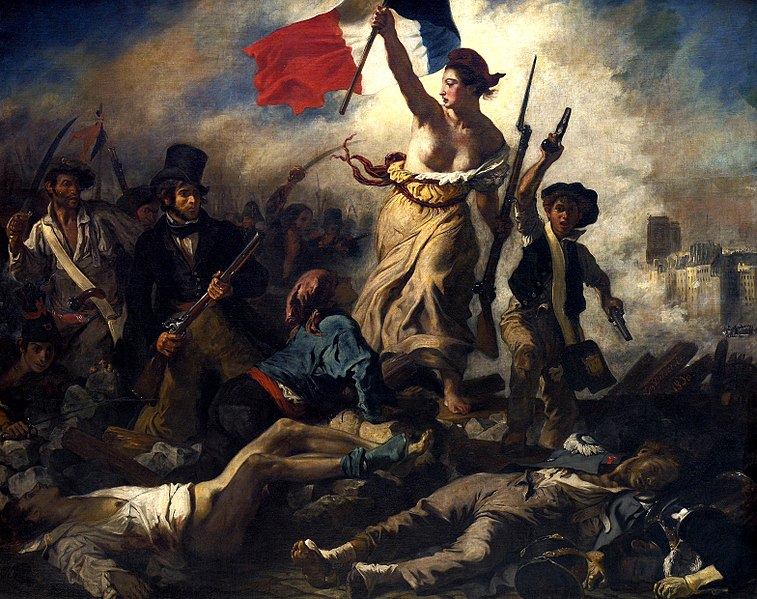 What tipped me over? A few things. But the catalyst was an email from former Boston Globe columnist turned Substacker (Truth and Consequences) which pointed me to this week’s public post. on the experience of wading into the cess pool of a website calling itself American Greatness. It was, as ever, more persuasive in the original German:

The crux of the argument made by Christopher Roach, an adjunct fellow of the Center for American Greatness, is that the right can no longer acquiesce to liberal indoctrination. “The forces of the aggressive, secular Left are not going to let any of us retreat into our own enclaves,” says Roach. “They will hunt down every last private club, pizza shop, and bakery out of mere spite. They will steal your kids and destroy your life.”

Cohen emphasizes that this isn’t just a matter of a handful of wackaloons on some web backwater.

For months now, political observers have noted the conservative movement’s increasingly authoritarian bent, so I suppose it’s not surprising that a publication devoted to promoting Donald Trump would unabashedly embrace such a message. But after reading a number of posts at American Greatness, I was struck by something even more disturbing — the increasingly existential, even eliminationist rhetoric emanating from the far right. Liberalism is presented not as an ordinary political or cultural movement. Instead, it is a clear and present threat to America’s future and the American people. To read American Greatness is to believe that America is in the last throes of liberal indoctrination, and the time is now to confront it with force, if necessary.

The crux, as Cohen points out is that this is exactly the same line that the right’s leading “intellectuals” are pushing:

It would be easy to dismiss the writings at American Greatness or any publication that attempted to put an intellectual gloss on Trumpism. This kind of language has long found a home on the fringe right. But the site includes a roster of what Sykes calls “right-wing luminaries as Victor David Hanson, Seb Gorka, David Harsanyi, Conrad Black, Roger Kimball, Mark Bauerlein, Josh Hammer, Ned Ryun, Dennis Prager, and Salena Zito.” These are writers who have some level of intellectual currency and influence in the conservative movement.]

I know, I know, an intellectual murderer’s row there and all that. But this kind of violent eliminationism is both terrifying to anyone with a historical memory that reaches further back than last week and hardly confined to the bay-at-the-moon end of the GOP spectrum.  Tucker Carlson is in Hungary praising an real-life fascist dictator, Orban, with Rod Dreher, the noted Christianist authoritarian, cheering him on. 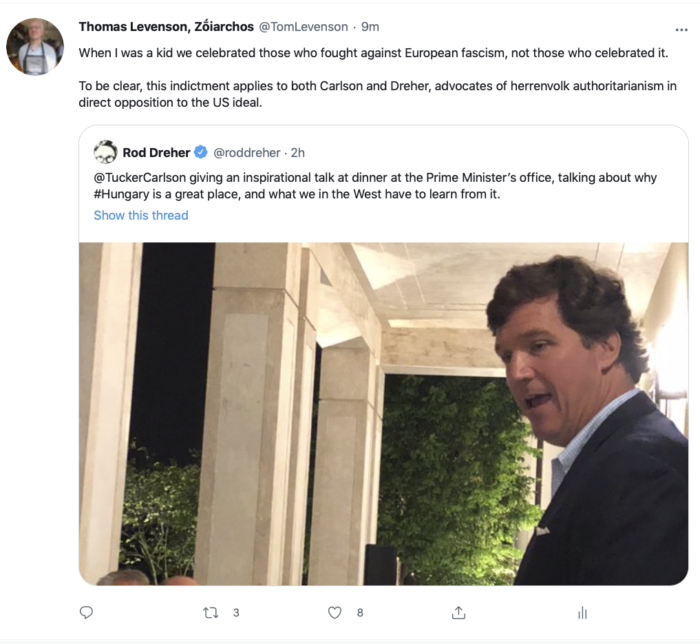 Mike Flynn has just gone full-on Triumph of the Will at a widely web-cast mega-Church event.  Newt Gingrich is openly touting “replacement theory” on Fox News, explicitly channelling a Nazi framework on mass media to justify the radical right’s ascent/return to power.  And there’s more besides.

I’m not posting this out of a sense of fatalism or despair. These people are clearly a minority. There are as many grifters as true believers, probably more, making bank off of gullible, timid Trumpoids, with no  intention of risking a good thing by actually taking up arms. There are a handful who we know have some tactical and political skill working this crowd; Mike Flynn may have drunk waaaaay too much mercury on his way to the haberdasher, but you don’t get three stars for being wholly incompetent in the military arts, and there are others who truly seek power (not just cash) and have skills to pursue it. And yet it’s pretty clear that if allowed to express their views peaceably and the ballot box, a significant majority of Americans reject the poison these anti-patriots are peddling.

That’s the crux, of course; if allowed…

I’m not going to pretend to know how to make that our reality.  But I’m actually hopeful, in the sense that I think much of the elected Democratic leadership and an increasing number of both elite and ordinary citizens have become aware of the gathering threat. Certainly readers of this blog have. That’s the start from which all further action will flow.

We’re back to where we’ve often been: the preservation of liberty requires eternal vigilance.

To that end, I don’t have a broad based prescription. But I can say this: any Jackals that live in AZ or WV: call your senators and (politely) express your strong support for voting rights legislation. Do it often. Get to the point where the staff (and/or the answering machine) know your voice and ask after your kids.

I have some thoughts about what more to do, but they’re worth what you pay for them, and I’ll mull a bit more (as in, try to get some actual expert insight). Further suggestions welcomed below, including, especially, how to confront the increasingly armed and dangerous attempts to intimidate democracy and seize power by force.

When and as we triumph, we can gather for a Balloon Juice chorus reading of the St. Crispin’s Day speech. Deal?