What can we count on the GOP to deliver?

Here’s a couple of things:

Inaction in the face of climate change.

I haven’t got confirmation from the ground yet, but the latest fire maps leave little room for doubt. The Dixie Fire exploded yesterday, burning through the mountain town of Greenville, surrounding the next place up the road, Chester, and pushing north into the Warner Valley and the southeast corner of Lassen Volcanic National Park.

So, be warned: all this may be of interest to no one but myself. If that’s the story for you, just read on by…

My family owns two little cabins in the Warner Valley, our plot bordering on two sides on the park itself.  They’re nothing special–one is a 20×24 ft. single room (plus bathroom) with a murphy bed in the corner.  That was the one my mum built as her personal shelter; the other, larger, was the family cabin of my childhood. Built in 1964, it too was basically a single room: the three bunkrooms and the room my parents used were separated by partitions, not floor-to-ceiling and noise proof walls.

No, I still don’t know what mom and dad were thinking.

Now they are almost certainly gone.  The latest fire maps show the leading edge of hot burn well up the valley from our cabins. That means all our neighbors places are gone too.

This wasn’t a zillionaires’ retreat, btw. The Warner Valley is a strictly seasonal destination.  No one ploughs the road, and there are a half dozen or so little clusters of cabins in the area that no one can get to from roughly November to May. It’s hella remote–5 hours or so from the Bay Area, with minor roads for the last bit of the journey.   It’s the kind of place folks in Chico build what folks in Maine call a camp to escape the summer heat at lower altitudes. It is, or was, just a gorgeous stretch of mountain country that extended-locals and a few of us lucky outlanders got to enjoy.

I spent every summer there growing up, and every year since I was about 30 I, and soon my own family, would spend a week or so there. Totally off grid: cell phone service didn’t reach our corner of the valley; there was no town electricity, and for the last few years we gave up on our generator; no internet, of course. Paradise in other words.

And now it’s gone. I suppose I can still hope for one of those fire miracles, but realistically, the structures are tucked up against the base of a really steep slope (Mt. Harkness, at whose summit fire lookout tower Edward Abbey completed Desert Solitaire) and are surrounded by large and bone dry trees.  The immediate ground around the two buildings is bare and clear…but it won’t take many embers to do the job. Dammit.

The Dixie Fire is the product of two American political tendencies. The first has been to ignore climate change, an core plank of Republican posturing for two decades.  That part of the world is in the second year of one of the deepest droughts on record. There is essentially no residual moisture in the soil, plants or air. Temperatures have been high, humidity during the fire has often dropped into single digits, which combined with the wind patterns has produced what are called “red flag” fire conditions several times in the three weeks and counting the Dixie Fire has burned, including yesterday and today, when the blaze burst past the containment plans that aimed to hold it off the north side of Lake Almanor, Chester, and the national park. That red flag status will hold until at least tonight. 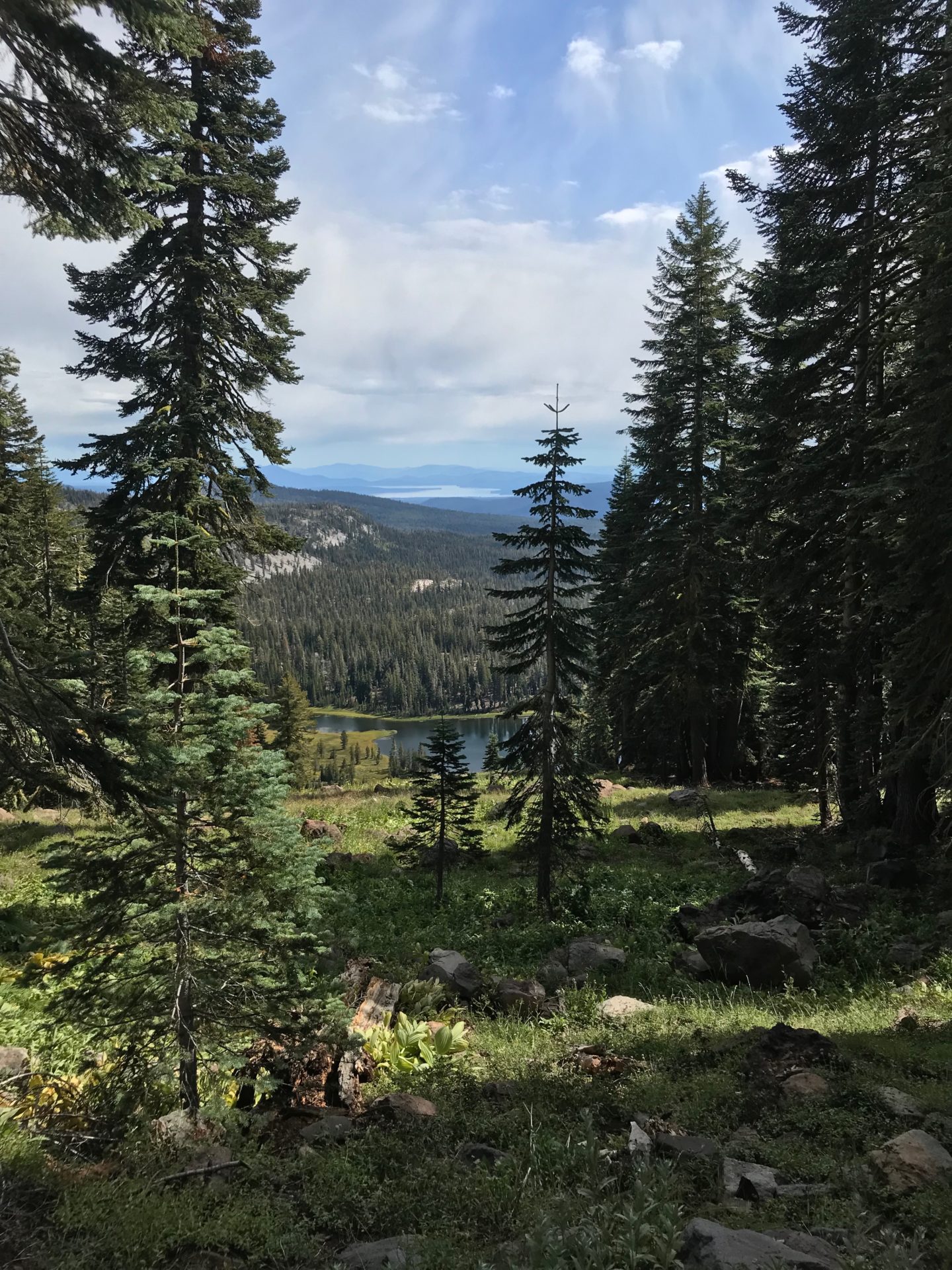 [That’s Lake Almanor in the distance, photographed from the trail from the Visitor Center to King’s Creek Campground. Crumbaugh Lake is in the foreground]

On the parochial level, the one that has me torn up right now, there really was nothing to do once the fire did jump that line: there’s only one small road into Warner Valley, so fire crews couldn’t safely get ahead of its front edge. It will keep on going until it hits the next plausible defensive position or the weather and winds change dramatically.

Globally, this is the new normal. Climate change is not a theoretical exercise anymore. It hasn’t been for years. What’s changed is how obvious and widespread the signal and the harm has become. Fire season in the west used to be an autumn thing, the tail end of the gap between the end of the spring snow and rain and the resumption of the wet season in the fall.    Now it starts in June, sometimes earlier, strikes more widely, costs more, and imposes so much more loss. The GOP’s success in blocking any meaningful response, from carbon reductions to the construction of infrastructure capable of withstanding the shifts we know are coming, are here, is directly implicated in what’s happening all over the Mountain and Pacific states this year, just as they were in the Texas freeze and power massacre, the floods and so on. And they’re damn well responsible–in part and indirectly, but responsible–for my personal loss, those two little repository of the memories of the happiest days of my life.

So yeah, I fucking hate Republicans for their willed stupidity in the face of a global, existential crisis.

Add to that this factoid. Some of you may recall that a faulty power line owned by the power company, PG & E, sparked the Camp Fire, which in November 2018 destroyed the town of Paradise, California, killing at least 85. PG&E filed for bankruptcy two months later, citing anticipated fire liability losses.  In December, the company pled guilty to 84 counts of involuntary manslaughter. It ultimately settled with victims, promising to pay $13.5 billion, in stock in the reorganized company.

Fast forward to today.  No investigations are complete yet, understandably, but PG&E is implicated in both the Dixie Fire’s start–it seems it didn’t maintain its power line routes well enough, and a falling tree may have knocked down a section–and the company has already suggested that its equipment may have caused the Fly Fire, which started on its own but later merged  with the larger blaze.

PG&E has a reputation for being a crappy company. It’s able to be so because the American approach to corporate oversight is to avoid it–a stance that is as near a tablets-from-the-mountains pillar of modern Republican politics. There’s no reason PG&E should exist in any form at this point: its assets should have been sold after the Camp Fire to satisfy its victims, the taxpayers on the hook for the fire response and cleanup, and any other creditors. Its functions should have been taken up a new/other power companies–and yeah, the entire sector needs to be closely regulated with on-the-ground enforcement so they don’t forget to do the basics, like trim trees that can knock down high voltage lines.  If corporations are people, then when they commit serious enough misdeeds they should face the corporate analogue to the death penalty.

But our Republican market fundamentalists/privatize-profit-socialize-risk asshole “betters” have not permitted anything like that stringency, and will go to the mattresses now to prevent it.

I look forward to selling my shares of re-re-organized PG&E stock the second that judgment hits my account. Fuck them and fuck the GOP that allows its monied masters to wreak such misery on its way to the last extractable dollar.

And yeah. This post is a way of putting some of my grief outside my head.  I can’t convey in words what this place has meant to me over each of the seven decades of my life. To my whole family.

To be real: I’m grateful for these memories. No one has died so far in this fire, a record I devoutly hope continues. This isn’t my home; I have a roof over my head tonight and comfortable bed to sleep on, with my son and spouse safe with me. My three siblings and I can and probably will rebuild, and its a certainty that when/if we do so the new cabin will be vastly more comfortable than the beloved lost building born of mom and dad’s genuinely odd choices. In time, the forests will come back.

But damn. This is a bad day. And yeah. I blame the GOP assholes who do their best to ensure we can’t have nice things.

I’m not going to let those fuckers have the last word. Have some more images of that part of the world, taken in much better times. I know some of the Jackals are familiar with the area. I hope these bring back some good memories for you as well. 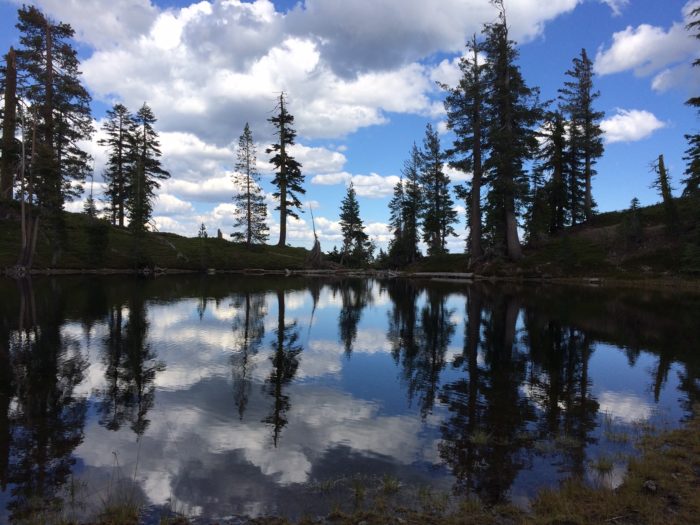 This is one of the Sifford Lakes on Flatiron Ridge, which forms one of the walls of the Warner Valley. There’s no trail to this little snowmelt pond. You have to know it’s there. 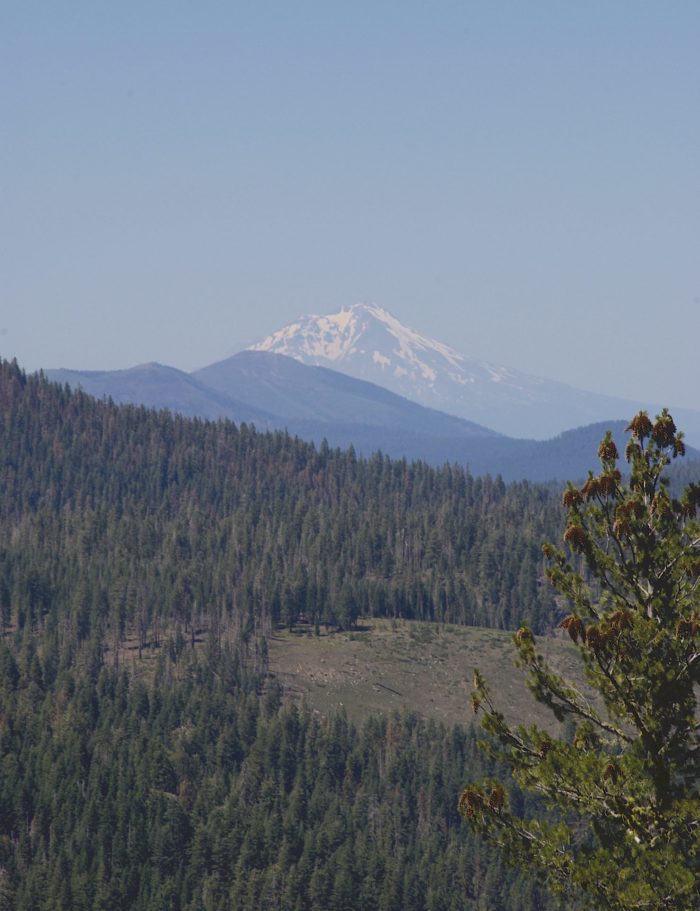 Last one. This is the view from Lee Meadow in the Warner Valley. When I was a kid, this was still a working cattle ranch, summer pasture for the herd. Now all that’s left is the scraps of the old corral in the foreground. Scorched earth now, almost certainly, but that doesn’t take away the recollection of the joy on every first Saturday in July, when the station wagon would take the turn at the corral and we’d know the cabin was only 500 yards further down the road. Summer began here: 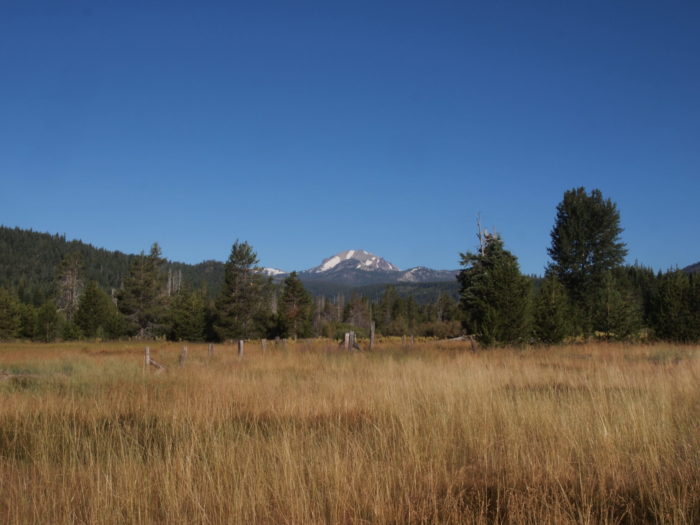 Talk about this sad story, or anything else. The thread: it is open.