You are here: Home / Healthcare / COVID-19 Coronavirus / Late Night Open Thread: Sometimes All You Can Do Is Point & Mock 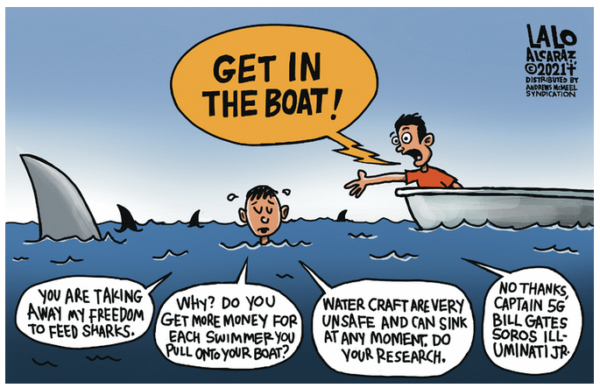 you mean a conductor? https://t.co/v1cZBeH02f

For those of you having difficulty understand why people don't trust the vaccine, let me shed some light on the matter. A thread:

Imagine you're a normal person, and you come back from your men's rights group meeting and you log on to a gaming review website and 1/

I believe this (not truncated, just very snarky) thread may have been based on an actual posting. And I’m very glad I don’t know who the original might’ve been!

In ADDITION to denying the efficacy of the miracle drug ivermectin, the so-called medical experts do nothing but take a dump on the Alex Jones concoction you’ve been taking that have been helping you bulk up.

Yet we’re supposed to believe them when 34/

The same media reporting on the vaccine is the one that lets you sign up for their paper online but to cancel you have to CALL AND TALK TO SOMEBODY.

Because the applesauce has those rib things, you are invariably left with applesauce in the container that you can’t get out!

Remember two weeks to flatten the curve? Yeah that was a big lie. I mean, it was Trump who said it but the deep state made him. We can’t trust a government that forces honorable presidents to say things they know aren’t true. 112/

And schools! Let’s talk about schools! They’re nothing but CRT factories and also the government kept them closed FOR AN ENTIRE YEAR! Can you believe it?

So you decide you’re going to homeschool, but then they act like you’re a religious weirdo and 143/

and Brie Larson wasn’t even any good. She was stiff as a board. The whole movie was a feminist lecture. Count me out. But as soon as you say you don’t care for the movie and call the lead actress an entitled bitch people call you a sexist. 166/

And so the more they want you to take the vaccine, the more reluctant you get. If they would just respect your decision not to get the vaccine and never talk to you about it or talk about how they got the vaccine or show any sign of taking Covid seriously at all, then you’d 182

while the politicians who are supposed to be taking this seriously instead fly on planes without masks. Those Hollywood starlets telling people to be careful are throwing parties and having sex. A lot of sex, probably. Which they wouldn’t do if they took the virsu seriously. 213/

So imagine you’re this guy. Just for a minute. Would you take the vaccine?

That’s what I thought /fin

To the extent that there is overlap between his reasoning and realworld hesitancy, it is with the group of unvaccinated that are most hostile and least persuadable. Certainly unpersuadable by people like me.

I support being as generous and kind with as possible with the vaccine-hesitant. Many have fears that are real even if mostly – in my estimation – misguided.

But for people who would point to Brexit and polling errors, there is not much I can pragmatically do with that. /fin

Previous Post: « Local Races Open Thread: Congratulations to Rep. Shontel Brown
Next Post: On The Road – Steve from Mendocino – We Have Cats 2 of 4