You are here: Home / Politics / America / In Case Anyone Was Wondering Why the Taliban Actually Were Able To Retake Afghanistan So Easily, It Is Because the Trump Administration Agreed the US Would Unconditionally Surrender To Them

The title is not hyperbole. The agreement negotiated by Ambassador Khalilzad, the Special Representative for Afghan Reconstruction working under the direction of Secretary of State Mike Pompeo on the direct orders of then President Trump makes the Treaty of Versailles look like strategic genius.

The abject surrender is in part one and sections 2 and 3 of part 3. Part 2, which is the Taliban’s responsibilities as a result of the agreement, are not enforceable by the US once the US and its Coalition allies complete the withdrawal from Afghanistan and because of what the US agreed to in part 1: to never again threaten to use force, use force, or interfere in any way in Afghanistan.

What did the US agree to:

The key parts are in screen grabs below. 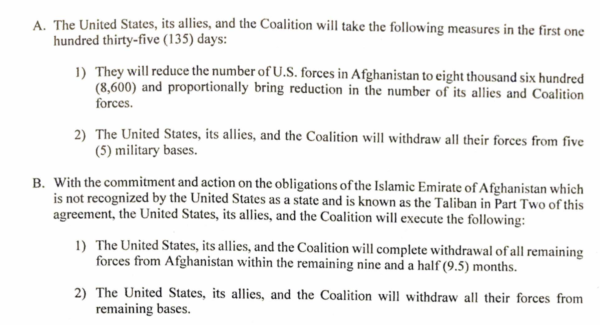 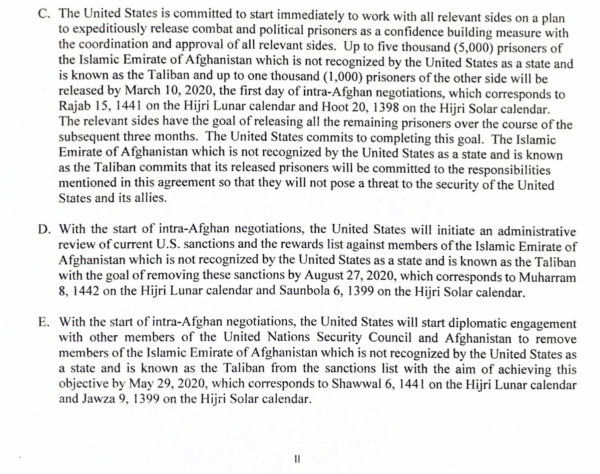 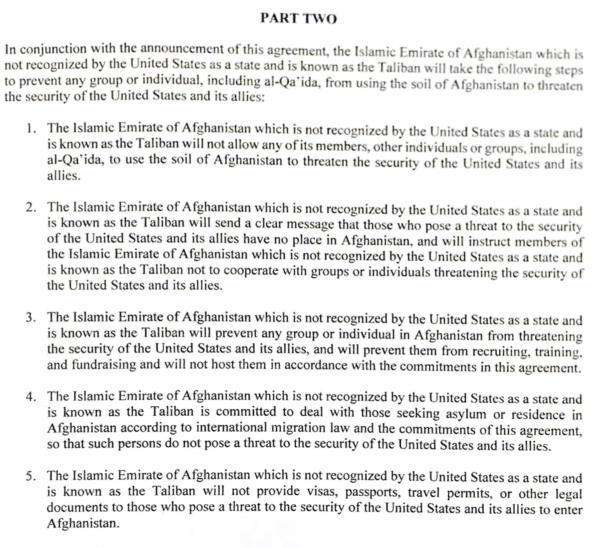 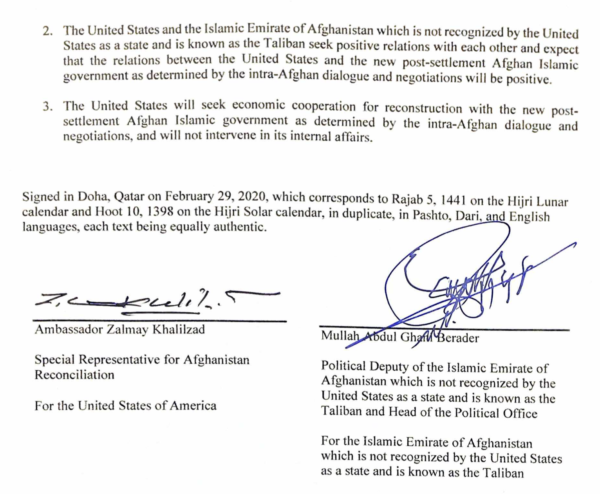 It also DID NOT help that now former Afghan President Ghani issued a stand down order to the Afghan Security Forces before he fled the country, allegedly with millions of dollars:

Or that, as the Special Inspector General for Afghan Reconstruction (SIGAR) has now twice documented*,there never really were 300,000 members of the Afghan National Defense and Security Forces because a plurality to a majority of the Afghan soldiers and police officers on the payroll were no show jobs.

Despite 13 years and several billions of dollars in salary assistance to the Afghan government for the ANP, there is still no assurance that personnel and payroll data are accurate. Since 2006, U.S. government audit agencies have consistently found problems with the tracking and reporting of Afghan National Police (ANP) personnel and payroll data.

In January 2015 SIGAR reported that more than $300 million in annual, U.S.-funded salary payments to the Afghan National Police were based on only partially verified or reconciled data, and that there was no assurances that personnel and payroll data were accurate. SIGAR found similar deficiencies during the course of the April 2015 audit of Afghan National Army personnel and payroll data. There are continuing reports of significant gaps between the assigned force strength of the ANDSF and the actual number of personnel serving.

Additionally, a number of the commanders in the ANDSF, both military and police, were either selling everything they could to the Taliban to pay their Soldiers and police officers who were not actually being paid, were embezzling the money, and/or took a payout from the Taliban not to fight.

We have four documentable, verifiable reasons for why the Taliban were able to so quickly and easily retake Afghanistan and not a single one of them was the result of something the Biden administration did.

I think it is important to stipulate that reasons 3 and 4 – the no shows on the payroll and the misappropriation of salaries – began when George W Bush was president and then continued until last week when we began the final withdrawal.

Finally, for more details on what the Tajiks in Panjir are doing, this is an excellent thread:

Ahmad Massoud and vice president Amrullah Saleh are said to be organizing a resistance movement against the Taliban. A couple of days ago, they were filmed together at northern HKIA on a late afternoon, entering a Mi-17 that reportedly transported them to the Panjshir Valley. https://t.co/GuwmnjnAav

* For some reason SIGAR’s Audit 15-26AR now goes to a page not found link.

Previous Post: « Open Thread: More Guns, No Butter!
Next Post: Mr. Rogers: Look for the Helpers Be the Helpers »