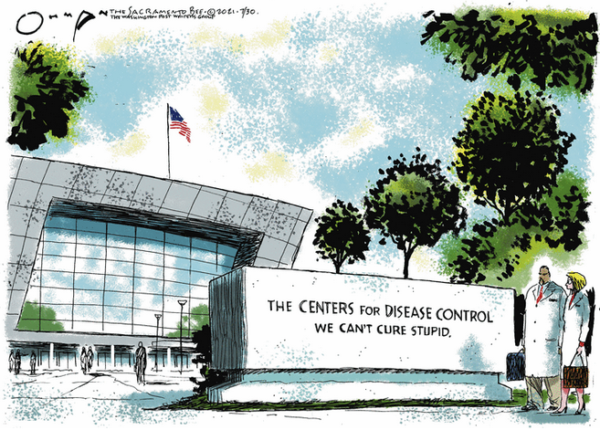 With 57.3% of the population covered, the US now has a lower vaccination rate than China, the UK, Canada, and most Western European countries, and just above Cuba. pic.twitter.com/MJjYiB97YZ

Half of U.S. children ages 12-17 have gotten at least their first COVID-19 vaccine shot, offering new hope for the safety of school children. New studies also suggest there are safe ways for schools to open. https://t.co/H8LpIeuBrO

WHO slams the 'shocking disparity' in access to vaccines. Only 4 African nations have been able to meet vaccine targets. "The vaccine crisis illustrates the fundamental weakness at the root of the pandemic," said WHO chief Dr. Tedros Adhanom Ghebreyesus https://t.co/eOiBfTJ5wo pic.twitter.com/1OSAr0jOrb

Russia recorded 64,000 excess deaths in July — taking the overall tally since the start of the pandemic to 600,000, second only to the U.S.https://t.co/Os6vDBST0P

Weekly reminder that cases in Spain keep going down, even after Delta took over.

Relative late roll-out (comparing with Israel, the UK and the US) and excellent vaccine acceptance has likely played a fundamental role. #VaccinesWork pic.twitter.com/roXoSPhuID

England gets ready for mass COVID inoculations for 12- to 15-year-olds https://t.co/e51zDi8nS3 pic.twitter.com/zWboPotXPk

South Africa will receive 2.2 million Pfizer-BioNTech vaccine doses from the United States to add to the 5.6 million doses it received from the U.S. in July. The new doses come as the country is racing to vaccinate 67% of its people by February next year. https://t.co/KLfG9xk6Ml

The U.S. shared 188,370 doses of the Pfizer vaccine with El Salvador via #COVAX. Our vaccines do not come with strings attached. We are doing this with the singular objective of saving lives. pic.twitter.com/HYAU8siPDy

.@CDCgov Advisory Committee on Immunization Practices has recommended a three-dose COVID-19 vaccine regimen for patients with weakened immune systems; allowing vaccine providers to offer an additional dose to their most vulnerable patients. https://t.co/c9e5b3DC3F

Pediatricians say they are being deluged by calls from anxious parents, who are eager to get their children vaccinated against the virus that continues its deathly rampage, especially as the delta variant appears to exact a greater toll on kids. https://t.co/qzZHzq2Iyn

Study, @CDCgov
"Among previously infected #Kentucky residents, those who were not #vaccinated were >twice as likely to be reinfected compared with those with full vaccination."
No, @SenRandPaul, #COVID19 infection doesn't protect as well as vaccination.https://t.co/Wp70qpk8ak

The U.S. government said on Friday it had confirmed the world's first cases of COVID-19 in deer, expanding the list of animals known to have tested positive for the disease. https://t.co/jwBAJcQe2n

Calls grow to discipline doctors who spreading coronavirus misinformation. A tiny number of doctors have had an outsize influence in spreading false information about Covid & vaccines https://t.co/bXhngekw8O

This is so depressing. So infuriating.

New York’s rate was so high in part because it got hit so hard at the very beginning, before we had any idea how to treat — and of course before the vaccine.

Not the case for Mississippi. https://t.co/XTaBwrETAy

Unbelievable. Over 3,400 people received a COVID-19 first dose with Harris County Public Health on Tuesday alone – a 706% increase compared to before our $100 incentive program. Let’s keep rolling, Harris County. Our nurses are being pushed to the limit – let’s have their back. pic.twitter.com/DlxOBTyQBQ

University of Alabama sets out to vaccinate 70% of Black Belt by fall 2022 https://t.co/iGSnydt7Lm

“I couldn’t believe we’re doing this again,” said Caroline Maloney, a nurse with nearly 30 years' experience. “We’ve closed the unit again, and here we are again.” Arizona is being hit by third surge of COVID as the state passes the 1 million case mark. https://t.co/LaPio7Y49Z

At a children’s hospital numerous young patients are struggling to breathe. A federal “surge team” is helping exhausted doctors & nurses through one of the most trying periods in the history of Children’s Hospital New Orleans https://t.co/lmCmKS02mI

BREAKING: A judge has ruled that Florida school districts may impose mask mandates. The judge agreed with a group of parents who claimed in a lawsuit that Gov. Ron DeSantis' ban on the mandates is unconstitutional and cannot be enforced. https://t.co/OPU1K9MGg8

As more American businesses demand proof of #COVID19 #vaccination, more #China counterfeiters are faking the proof. How do you spot the fake? @CNBC presents: pic.twitter.com/oxQSqieR43

"Florida has recorded about as many cases in the past 48 hours as Australia has during the entire pandemic."

One thing to know about grifters is that they don't usually create new ideas; that's too hard, and the chance of success too low. Instead they try to surf the waves of existing ideas — to become the avatars and champions of the madness.