ON ITS WAY TO PRESIDENT BIDEN!!https://t.co/0cKTZnZGFE

Congress on Thursday approved a measure to fund the government into early December, staving off a shutdown that was set to occur after midnight…

The funding stopgap sustains federal agencies’ existing spending until December 3, at which point Congress must adopt another short-term fix, called a continuing resolution, or pass a dozen appropriations bills that fund federal agencies through the 2022 fiscal year.

The new measure also includes billions of dollars to assist in responding to two recent, deadly hurricanes that battered the Gulf Coast and Eastern Seaboard, as well as other money to aid in resettling refugees arriving from Afghanistan.

Senators adopted the measure Thursday after Senate Majority Leader Charles E. Schumer (D-N.Y.) brokered a deal with Republicans that allowed them to vote on a series of amendments, including one that seeks to block the federal government from spending money to carry out President Biden’s pending vaccine requirements for medium and large-sized businesses. That amendment, and another targeting Afghan aid, require 60 votes to pass and failed in a chamber where Democrats possess a tie-breaking majority.

House lawmakers followed suit later in the day, sparing what would have been a potentially destabilizing shutdown during the coronavirus pandemic. Federal agencies in recent days had scrambled in preparation for the worst, seeking to safeguard critical public health programs from possible disruption…

Still unresolved is the fight over the debt ceiling, the statutory limit on U.S. borrowing. The cap allows the government to rack up debt to pay its bills. Treasury Secretary Janet Yellen has told Congress that her agency will run out of flexibility to avoid missing payments after October 18, at which point Washington would face the unprecedented threat of default unless Congress acts.

Republicans led by Senate Minority Leader Mitch McConnell (R-Ky.) have blocked multiple attempts to address the debt ceiling in recent days, arguing that Democrats should use a process known as reconciliation to address the issue. The move allows Democrats to adopt bills with a simple majority. But Schumer has argued it is time consuming and “risky,” creating a stalemate in the chamber with significant economic implications, as the Biden administration warns inaction could plunge the country into a recession…

Congress gave final approval to a spending bill that would extend federal funding through early December and provide emergency aid to support the resettlement of Afghan refugees and disaster recovery efforts across the country. https://t.co/L5VOVuntJO

… Lawmakers reached a deal on the spending legislation after Democrats agreed to strip out a provision that would have raised the federal government’s ability to continue borrowing funds through the end of 2022. Senate Republicans blocked an initial funding package on Monday over its inclusion, refusing to give the majority party any of the votes needed to move ahead on a bill to avert a first-ever federal default in the coming weeks.

The legislation that passed on Thursday would keep the government fully funded through Dec. 3, giving lawmakers additional time to reach consensus over the dozen annual bills that dictate federal spending. It would provide $6.3 billion to help Afghan refugees resettle in the United States and $28.6 billion to help communities rebuild from hurricanes, wildfires and other recent natural disasters…

Before agreeing to the details of the spending bill Thursday morning, the Senate defeated an amendment proposed by Senator Tom Cotton, Republican of Arkansas, that would have curtailed the duration of some of the benefits for Afghan refugees.

Senators also voted down an amendment, offered by Senator Roger Marshall, Republican of Kansas, that would have barred funds from going toward the implementation and enforcement of Mr. Biden’s coronavirus vaccine mandate, as well as an amendment that would deny lawmakers pay should they fail to pass a budget resolution and the dozen spending bills by Oct. 1.

END_OF_DOCUMENT_TOKEN_TO_BE_REPLACED

I thought we might have a thread for all the lurkers out there.  It’s been well over a month since the last one.

You may already know this, but when you post your first comment, it goes into moderation, and sometimes it takes a while for one of us to see it and free your comment so it shows up for everyone.  Once it’s released from moderation, it goes into the comments with the time-stamp for when you first submitted it, so then most people probably never see it.  So it’s not surprising that first comments don’t get replied to.

So I thought we would try this open thread where I can keep a particular eye out for first comments that go into moderation.

Some of you guys poked your heads up last time we had a lurker thread; hoping to see you guys again today, too!

In any case, it’s lurker appreciation day here on Balloon Juice!  Welcome, all.

END_OF_DOCUMENT_TOKEN_TO_BE_REPLACED

Jonathan Chait became an unlikely member of the burn-it-all-down pundit caucus when the tiny minority of obstructionist Democrats, most prominently Senators Manchin and Sinema, seemed determined to follow through on their bad-faith “my way or the highway” strategy to defeat the Democratic Party’s agenda.

The biggest problem Democrats face is financing the [BBB] program, given that every dollar Democrats can raise, either through higher taxes on the wealthy or reduced spending on prescription drugs, has a team of lobbyists pleading its case. Manchin laid out a practical way through: repeal of the high-end portion of the Trump tax cuts to pay for it. “I want to do a tax overhaul,” he said. “One thing you understand that all Democrats agreed on, there’s not a lot of things we all agree on, is that the 2017 tax cuts are unfair and weighted toward the high end. Let’s fix that.”

I’d quibble with Manchin’s self-serving “there’s not a lot of things” Democrats agree on framing since upwards of 95% of Democrats in Congress, overwhelming majorities of voters and the POTUS agree with the policy agenda that Biden and the Democrats ran on and got elected to implement. The obstructionists are the flies in the ointment.

But I take Chait’s point, which is that Manchin and the other flies in the ointment are on record opposing Trump’s plutocrat-friendly tax cuts, so maybe they could be persuaded to view funds generated from a repeal as revenue that could then be spent to improve regular people’s lives. Chait also notes that Manchin made mildly favorable mouth-noises about the child tax credit, so that could be a spending peg Himself would countenance. Dog knows people could use the help.

Of course, no one knows how this scheme would fare when subjected to Sinema’s inscrutable “Is it mavericky? YES/NO” decision tree. And unless there’s serious spending to address the climate crisis in the reconciliation package, lots of Democrats will decline to support the infrastructure deal in exchange for obstructionist support on reconciliation. And they’ll be right to do so, in my opinion.

Still, it’s the start of a potential framework to reach a deal that was allegedly mostly hashed out months ago. Open thread.

END_OF_DOCUMENT_TOKEN_TO_BE_REPLACED

Did you know that today has been declared ‘Kittens’ day?

Well, it has, because I just did it. Indycat32 sent in pics of her adorable new kitten, Chloe.

As a bonus, I will add the first  15 cat or kitten pictures you send in the comments of the post.  Just write something about your feline friend and send me a pic, and I’ll at the pic to your comment.

Oh, and tomorrow has been declared ‘Puppies’ Day.  Same same.  Except it’s the first 10 dog or puppy pics.

And now, back to Chloe, new owner and master of servant Indycat32.  I adore the way some kittens can twist their little bodies in ways that shouldn’t be possible.  I called my Willow ‘Twister’ for awhile because she did that.  I miss that so much! 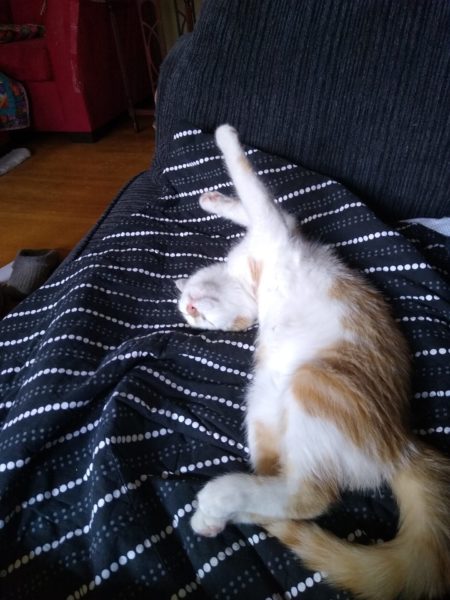 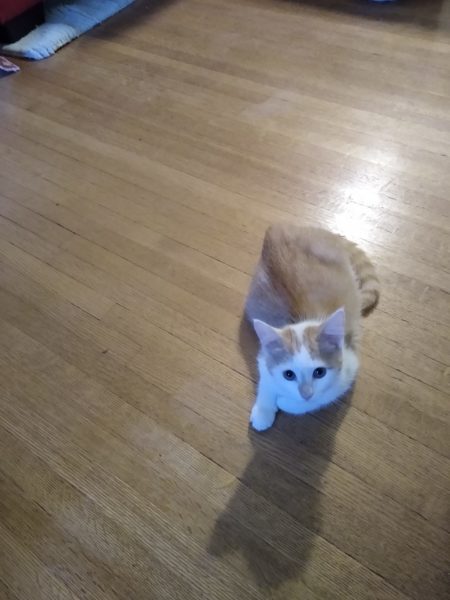 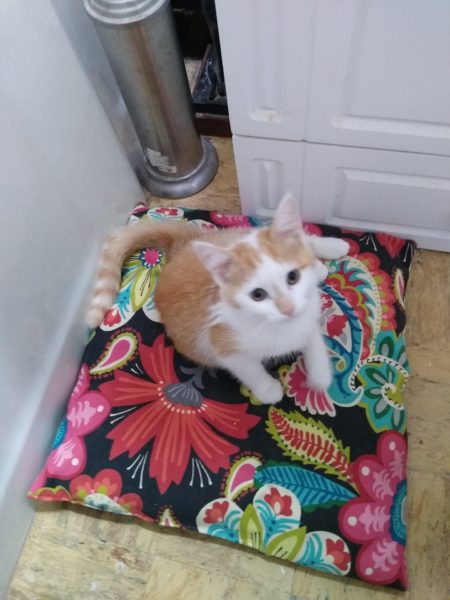 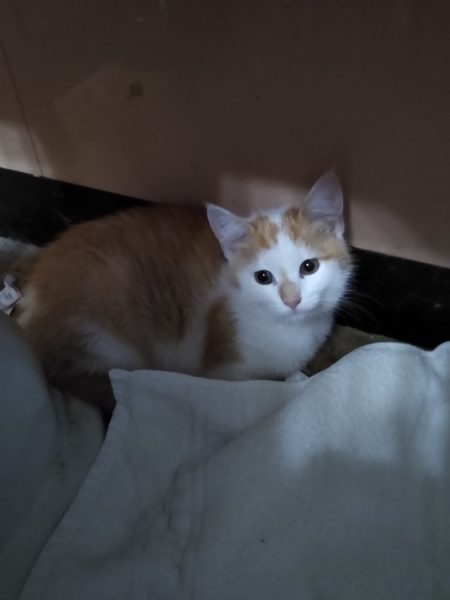 END_OF_DOCUMENT_TOKEN_TO_BE_REPLACED

This Florida Man has won the internet for the Month of September pic.twitter.com/PB9dIMDkOS

Why do I imagine Pelosi & Biden looking at Eugene Bozzi’s alligator-wrangling technique and thinking ‘Not bad, for a beginner’… ?

My Build Back Better Agenda and the Bipartisan Infrastructure Deal are overwhelmingly supported by the American people. We are working to get this done. pic.twitter.com/p5lcLcTHgV

There’s a lot of noise out there so here are the facts: a new ALG survey of voters in 48 battleground CDs shows that voters support the Build Back Better Agenda by double digit margins.

And they’ll give Members who back the Build Back Better agenda a 15 point bump at the polls https://t.co/J4IpMJgFAs pic.twitter.com/HvUrEHCD6G

Remember, 2 more Democrats and you never have to hear about Manchin and Sinema again.

i would pay an added tax that is specifically earmarked to offset this cost. https://t.co/FHVeuETzFc

Meanwhile, because GOP Death Cult, we’re back to talking about The Trillion-Dollar Coin…

This is also why my conviction that The Coin should be Big as at least sixty feet tall level Big, is absolutely ironclad.

This is also why I believe The Coin should be valued at Debt Plus One dollars. Don't even bother giving it a fixed value. It's just Debt Plus One, backed by the full faith, confidence, and nuclear arsenal of the US Government and the madmen that run it.

END_OF_DOCUMENT_TOKEN_TO_BE_REPLACED

White House moves to shield pandemic response if the government shuts down https://t.co/Esv9vKp3hD

END_OF_DOCUMENT_TOKEN_TO_BE_REPLACED

North Rim: The Arizona strip between the Canyon and Utah. We visited it from Kanab UT.

Once more opting for less traveled areas of a National Park, we spent a day at the North Rim of the Canyon. We saw the South Rim on a family trip in 2004, and since then I wanted to see the other side. Apparently only 10% of Grand Canyon visitors get here; understandable because it’s quite remote from Flagstaff, Phoenix, and other parts of Arizona. It’s a 200 mile drive from the South Rim to the North, so it makes more sense to add it to a trip to see the Utah parks, which is what we did.

Nevertheless, there were a lot of people visiting, especially considering it opened for the season on May 15th. The parking area for the Kaibab Trail down into the canyon was jammed, with cars parked on the road on both sides. This set of pictures was taken from the lodge area at the edge of the canyon.

On our way back to where we were staying in Kanab, we drove out Cape Royal Road, which had several overlooks, seeing parts of the canyon that aren’t visible from the South Rim. We also saw evidence of fires on all of our drives, some prescribed, some not. Fire suppression in most of the 20th Century changed the ecology and the intensity of the fires that occurred.

END_OF_DOCUMENT_TOKEN_TO_BE_REPLACED 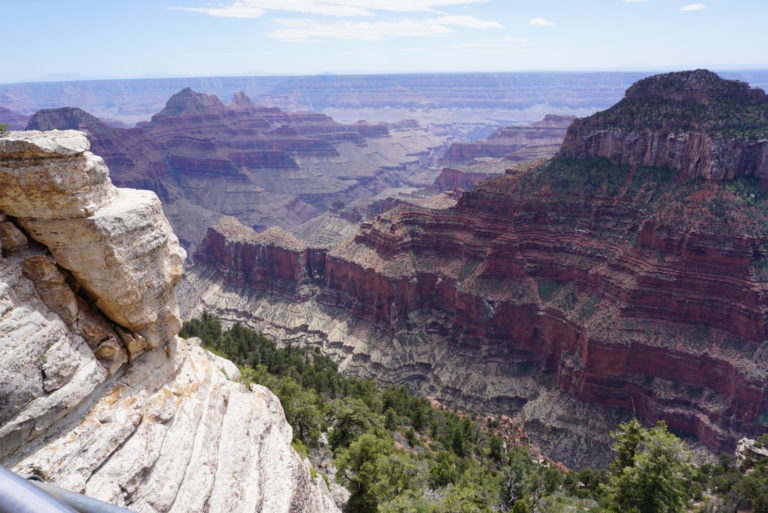 This was our first view of the canyon.