I have hazy childhood memories of the Nixon administration, and Reagan was president when I was in high school, so it still seems somewhat miraculous to me that the California Republican Party imploded so thoroughly in a relatively short timeframe. I mean, y’all elect your odd Ahnold, but the state seems admirably resistant to actual fascists, and I respect that. Ever since, I’ve hoped the national Republican Party would follow the Golden State trajectory to relative electoral irrelevance.

I’m aware there are still lots of Republicans in California. Emperor Tang got twice as many votes in California than he did in Alabama, Arkansas and Mississippi combined. The state contributes odious nitwits like Kevin McCarthy and Devin Nunes to the federal government. But the Trump cult doesn’t hold sway, so such irritants can be managed, sort of like a recurring rash.

Not so in the failed state of Florida, where the scale of the governor’s pandemic mismanagement is coming into view (60K+ dead) and being met mostly with yawns, as far as I can tell. [NYT]

Critics of the governor have said that his fight against mandates resulted in needless deaths. Florida experienced its worst daily death tolls during this year’s summer surge, when vaccines were already widely available.

As cases spiked, Mr. DeSantis fought local school districts and governments that required masks or vaccines, withholding funds, fining them or taking them to court. (Most school districts have now loosened their mask restrictions, in light of the falling virus levels.)

Now DeSantis and his army of sycophants are demanding credit for the falling caseloads, like arsonists pointing to the smoking stumps of a burned-out forest and aggressively requiring praise for saving the trees. And it seems to be working.

It’s not because DeSantis or Florida Republicans have a great communication strategy. The governor’s press secretary, Christina Pushaw, is a giggling internet troll who tweets anti-Semitic memes, incites online mobs to harass reporters and tweets and retweets childish bullshit like this for $120K per year: 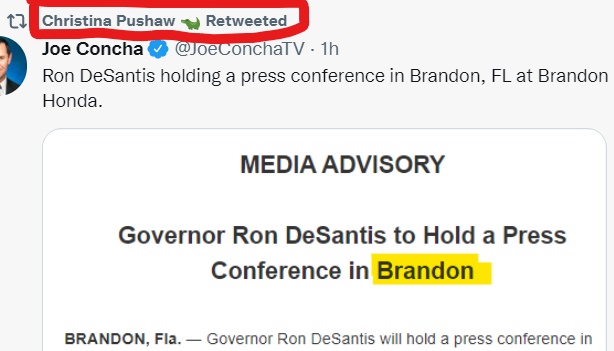 This isn’t the first time these clowns have gone to the “Brandon” well either. They probably arranged travel to that Tampa suburb today to conduct official business solely because the word “Brandon” gives the MAGAs a transgressive thrill. It’s government by feral middle-school mean kids.

I hope America follows the path of California, but I fear it could faceplant like Florida. Let my failed state be a cautionary tale, fellow citizens, because for all our faults, damn it, we deserve better. Open thread.

Previous Post: « Thursday Morning Open Thread: VROOM!
Next Post: Worrying About Republican Retaliation Is Pointless. They Retaliate Even When They Have Nothing to Retaliate For