Maybe the GOP’s social media intern is experiencing a temporal anomaly, and that’s why he or she is denigrating Biden, who has been president for about 35 and 1/2 days, for not fulfilling a first 100 days campaign promise:

We (or at least I) tend to perceive Republicans as preternaturally powerful foes, and that’s not entirely unjustified since they so often manage to advance an unpopular and/or reactionary policy agenda despite representing a vastly smaller number of people in a so-called democracy. But we may be underestimating just how on the ropes the fuckers are right now.

Cases in point: the above intern time-traveling to scold Biden. Fox News running a segment that claims Joe and Jill Biden’s 44-year marriage is a PR stunt. Newsmax age-shaming the Bidens’ senior dog as “unpresidential.” It’s almost a cry for help, that level of petty bullshit.

Also, imagine if Democrats did this:

Q: Do you believe former President Trump should speaking at CPAC?

McCarthy: "Yes he should."

Cheney: "That's up to CPAC….I don't believe that he should be playing a role in the future of the party or the country."

McCarthy: "On that high note, thank you very much." pic.twitter.com/U8JS8A8MVk

The Beltway press would be ripping into that party’s corpse like a flock of vultures on ripe roadkill. Even now, He Who Shall Not Be Named is “vetting” potential 2022 endorsees by sorting them into piles according to their level of enthusiasm for the stolen election lie. That practically guarantees a crop of nutter GOP candidates who will make it harder for Republicans to claw back Congressional power.

Let me hasten to add that I am not counting chickens here! The past several years demonstrated to me that the country is more stupid and broken than I suspected, and I’ll never trust us again. But I can’t help noticing that Republicans keep doubling down on injecting bleach. Open thread!

END_OF_DOCUMENT_TOKEN_TO_BE_REPLACED

I am the financial aid coordinator and VA Certifying Official at a campus of a major public research university in Pennsylvania.  I have held my current position since 1998 and prior to that I worked at the local community college for nine years.  At the community college, I coordinated services, including help with financial aid, for our disabled students and taught GED prep courses.  My entire career in higher education has been spent deep in the world of financial aid.

I read mistermix’s original post on financial aid and found some of it completely fair and some of it really off from my own experiences.  Here is my response to his post.

END_OF_DOCUMENT_TOKEN_TO_BE_REPLACED

Possibly because the BBC is not American, this is the best analysis of the Recovery Act I’ve seen:

Biden's Covid stimulus plan: It costs $2tn but what's in it? https://t.co/9e2p3EUTZW


Suspect it’s a general consensus that the $15 minimum wage will have to be sacrificed, for the moment, but I hope & believe that Biden will dig in hard on providing aid to local governments. Conclusion:

Congressional Republicans are lining up to oppose the entire Covid-19 relief bill, even though there has been little organised national effort to turn public opinion against it.

Conservatives will object to the $1.9tn price tag as too high given the skyrocketing US national debt and then specifically focus on more controversial items like the minimum wage increase and payments to Democratic-controlled states and cities.

In the end, there may be a few Republicans who break ranks and reluctantly support the bill rather than be seen opposing the legislation’s popular measures.

On Tuesday, Biden told reporters that he was optimistic the legislation would pass, but it wouldn’t be “by a lot”. He is probably right on both counts.

END_OF_DOCUMENT_TOKEN_TO_BE_REPLACED

The House reconciliation bill has significant health insurance provisions.  I’ve mostly been focusing on the Affordable Care Act components as that is my jam.  It also has a very large temporary COBRA subsidization scheme (Subtitle E, Section 2401):

(1) PROVISION OF PREMIUM ASSISTANCE.—
(A) REDUCTION OF PREMIUMS PAYABLE.—In the case of any premium for a pe25 riod of coverage during the period beginning on the first day of the first month beginning after the date of the enactment of this Act, and ending on September 30, 2021, for COBRA continuation coverage with respect to any assistance eligible individual described in paragraph
(3), such individual shall be treated for pur7 poses of any COBRA continuation provision as having paid the amount of such premium if such individual pays (or any person other than such individual’s employer pays on behalf of such individual) 15 percent of the amount of such premium.

In plain English, qualified individuals who are on COBRA would see the federal government pay 85% of the  premium between April 1st and September 30th of this year.

COBRA has two great advantages over many other options.  First, it is the same coverage that someone already had.  There are no learning costs.  There are no transition costs of finding a new doctor/hospital or re-doing a pre-authorization.  Secondly, as it is the same coverage, the out of pocket expenses already accumulated while employed carry over.  Someone who had maxed out their deductible still has a maxed out deductible on COBRA coverage while they would be starting from zero again if they went on Exchange.

COBRA has a huge typical disadvantage.  It is expensive as hell.  COBRA, in normal times and under current law, has a premium equal to 102% of the group, non-age adjusted rate.  This means someone who is on COBRA is paying through the nose.  COBRA is a good deal compared to the Exchanges for much older than average employees who have already had large medical expenses for the year and anticipate large future medical expenses.  It is a horrendous deal for younger employees with little expected healthcare costs.  COBRA is always adversely selected.

The policy rationale can be boiled down to seamless transitions and a judgement about the nature of employment loss. We know that people fall through the cracks and starting new relationships impose significant individual and system level costs.

If we think that most of the people who are losing their jobs are losing their jobs temporarily because of short term shutdowns and slowdowns BUT that those specific jobs for the people who are specifically eligible for COBRA are going to come back quickly, then minimizing the number and pain of insurance transitions makes a ton of policy sense.  And this is a not a crazy bet if we think that the combination of masking, vaccination and ventilation will crush COVID combined with massive firehose of federal money ($1400 checks etc) and significant savings from the middle and upper-middle classes about to be spent this summer.  Someone who was the 3rd salesperson for a tool and die company and got furloughed in January has a good chance of coming back in May for the same job at the same company.

Now if we think that there is a lot of job loss for people who are COBRA eligible which is permanent in that their job no longer exists even if there are plenty of similar job openings that will become available to them in the near future, COBRA subsidization instead of sending people to the exchanges makes less sense.  People would be transitioning between coverage systems anyways.

That would be the short policy take.  The political take is simple — people don’t like navigating new systems of coverage and the population that likes COBRA relative to Exchange are fairly high propensity voters who would be seeing a very explicit and large policy that makes their lives a lot easier.

END_OF_DOCUMENT_TOKEN_TO_BE_REPLACED

Fun fact: the covid crisis has produced over 1200 new words in German over the past year. Personal favourites are coronamüde (tired of covid) & Impfneid (envy of those who have been vaccinated).

END_OF_DOCUMENT_TOKEN_TO_BE_REPLACED

After Siracusa, we drove west across Sicily to Agrigento.  And again struggled with navigation.  Most road signs again had several towns listed, and often not any that we recognized.  We’d drive into a vlllage to find no road signs at all.  One village, we kept to what we thought was the main road but found ourselves headed downhill on a narrow road of hairpin turns making it impossible to turn around.  The road kept getting narrower and rougher, then around one turn was a parked van for an electrical company facing uphill.  A relief, because I figured if they had come from below—there had to be a way through.

END_OF_DOCUMENT_TOKEN_TO_BE_REPLACED 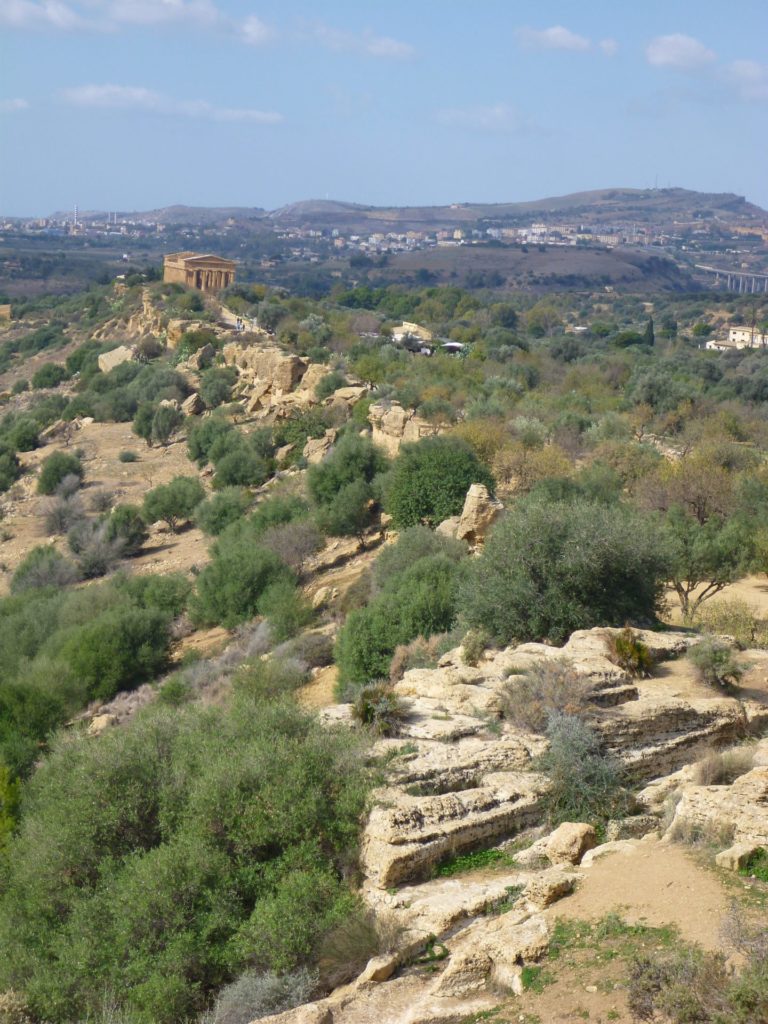 Valle dei Templi (Valley of the Temples) is just west of the town of Agrigento.  As you can see it’s not actually a valley, rather a ridge with seven Greek temples constructed during the 6th & 5th centuries BC.  We stayed in a small hotel built around a 16th century watch tower which had been constructed for protection against Turkish invasions.  Our window looked across to this ridge, with the main temple illuminated at night.

What do you do if you find a lynx killing your chickens? If you're Chris Paulson, you grab it by the scruff and take a selfie. Speaking to him in a moment. Listen here: https://t.co/YFWbHjvqL5 pic.twitter.com/1IjKRpaCP2

For some reason ‘Kill my chickens, and I will resort to humiliating you on camera’ seems very… appropriate?

Here's the video of Chris giving the lynx a lecture (I keep trying to post this and twitter keeps stripping the sound so hoping this works) pic.twitter.com/MJjnK31fR0