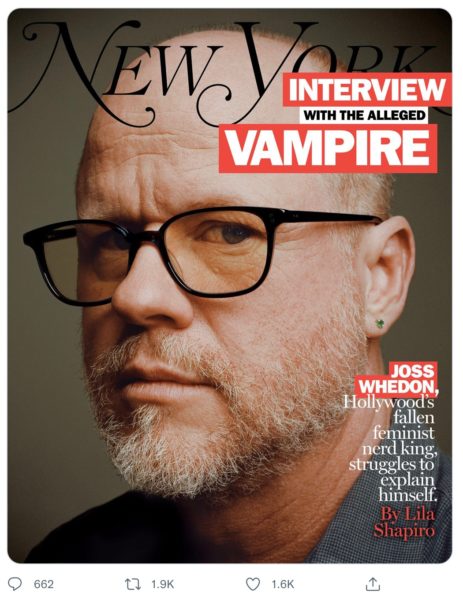 Joss Whedon’s interview with New York magazine was many things: a complete denial of responsibility for the pain he caused, a self-mythologizing “woe is me” pity party, and a not-so-subtle dig at the people he victimized. Journalist Lila Shapiro gave Whedon enough room to paint a terrible picture of himself, with plenty of paint left over for his fellow pseudo-feminist power-tripping ilk.

Bottom line, Whedon is the personification of the hateful asshole manager at McDonalds who is completely invested into making their overworked and underpaid employees miserable every goddamned day. Cruelty is always the default.

And I don’t care that Whedon is a gifted, award-winning writer and director. Too many idiots buy into the sick delusion that anything goes when you’re creating Art, even when it hurts other people. Yeah, I was an asshole. But I’m rich, and I won an Emmy, so it was worth it.

But Whedon did apologize, however. Sorta kinda maybe.

“This was a very young cast, and it was easy for everything to turn into a cocktail party,” Whedon told New York. “Sometimes you have to yell”, he added.

Supposedly, the “yelling” got pretty bad. Michelle Trachtenberg (who played Dawn Summers, Buffy’s sister) said there was a rule on set that Whedon was not allowed to be in a room alone with her. Trachtenberg was fifteen years old. Hey, spare the rod, spoil the child, right?

“For nearly two decades, I have held my tongue and even made excuses for certain events that traumatize me to this day,” she began.

“Joss Whedon abused his power on numerous occasions while working together on the sets of Buffy the Vampire Slayer and Angel,” she wrote of the show creator. “The disturbing incidents triggered a chronic physical condition from which I still suffer. It is with a beating, heavy heart that I say I coped in isolation and, at times, destructively.”

Carpenter claimed Whedon found his alleged misconduct “amusing,” claiming he was particularly cruel to her while she was pregnant, even calling her “fat” in front of cast and crew.

“He was mean and biting, disparaging about others openly, and often played favorites,” she wrote. When Whedon found out she was pregnant, she says, he asked the actress if she was “going to keep it” and “manipulatively weaponized my womanhood and faith against me,” Carpenter alleged.

Speaking about her pregnancy and stress, Carpenter wrote that all her joy was “sucked right out,” adding, “I made excuses for his behavior and repressed my own pain.”

Thing is, although Whedon is getting his ass handed to him right now, some people are missing the forest fire for the trees. The most disturbing aspect of Whedon’s predatory behavior is how damned long he kept getting away with it. Carpenter was silent for over twenty years because she felt it wasn’t safe to speak up. Truth be told, Whedon isn’t an abberation. Not at all. In this ugly, misogynistic culture, Whedon is just the same old same old.

And when brutalization of women is normalized, bad men do bad things because they feel comfortable doing so, especially when they’re in a position of power. It doesn’t matter whether it’s at your neighborhood Mickey D’s or a soundstage in Hollywood, some men are gonna be the thugs who think rape is “sexyfuntime”.

Chris Noth of Sex and the City and The Equalizer was busted for being a creep who couldn’t keep his hands to himself. Behind the scenes on Doctor Who, John Barrowman got off on showing his junk to actresses on set. So did Louis CK on Louie. Bill Cosby acted like sexual assault was an Olympic sport and he really wanted to win that gold medal. After multiple complaints of misconduct, Jeff Garlin was finally kicked off The Goldbergs. The monstrous Harvey Weinstein went to jail.

But don’t forget that the men who committed these crimes got away with it for years because even though everybody knew what was going on, these men kept on doing it because other men did nothing about it. For years women were assaulted, harassed or lost their jobs because of these men and other men did nothing about it. It was only when other women stopped being silent and started raising hell that these men faced consequences for their awful behavior and women shouldn’t have to do the heavy lifting most of the time because otherwise things won’t change.

If something ugly is going down on a movie set, the male actors can stop it. For example, Winona Ryder remembers what happened when director Francis Ford Coppolla was bullying her during the filming of Bram Stoker’s Dracula:

During a recent interview with the Sunday Times, Ryder recounted an incident on the set of Bram Stoker’s Dracula in which director Francis Ford Coppola urged the other actors on set to join him in heaping verbal abuse upon her to elicit an emotional response. Ryder said costars Reeves and Anthony Hopkins, however, refused to join in.

The scene in question finds Ryder’s character lying on a bed with Dracula (Gary Oldman), and he turns into a bunch of rats. Off camera, Ryder said, Coppola was shouting, “You whore! You whore!” in an attempt to get her to cry. “To put it in context I’m supposed to be crying,” she told the Times. “Literally, Richard E. Grant, Anthony Hopkins, Keanu… Francis was trying to get all of them to yell things that would make me cry. But Keanu wouldn’t, Anthony wouldn’t… the more it happened, I was like… It just didn’t work. I was, like, really? It kind of did the opposite.”

Reeves and Hopkins knew that what Coppola was doing to Ryder was bullshit, so they stopped it. Now, as a counter-example, I bet Shelly Duvall wished Jack Nicholson said something to Stanley Kubrick when the director played sick mind games and verbally abused the terrified actress for a goddamned year while shooting The Shining. But Nicholson said and did nothing. It was no big deal. Same old same old.

The only language that misogynist jerks understand is “male”; they’re incapable of hearing the word “no” unless another man says it. Therefore, any man who claims to be a feminist ally is obligated to use this leverage when it’s necessary. If they don’t use it, they’re part of the problem.

Men can’t get away with pretending that nothing is happening and telling themselves that women aren’t being victimized and doing nothing and acting like Sgt. Schultz from Hogan’s Heroes anymore. If a dude’s commitment to feminism begins and ends with him putting a #Me Too bumper sticker on his Prius, he’s a fraud.

Optimal single state & insurer strategy under ARPA subsidies
Next Post: Now It Can Be Asked: ‘Is Ginni Thomas a Threat to the Supreme Court?’ »