I’m going to keep this rather short tonight as I’m completely wiped from picking up large boxes, moving them, reorganizing the space they were in, and then moving them back.

As has been the case for the past several days, the Russians increase their operational attack tempo as dawn approaches.

Residents should head to the nearest shelter.

Residents should head to the nearest shelter.

And this just in!

END_OF_DOCUMENT_TOKEN_TO_BE_REPLACED

Preparing turf for the 2022 World Cup in Qatar is environmentally costly as an elite corps of groundskeepers have to maintain 144 green, lush fields, including eight stadium pitches and 136 training grounds https://t.co/vIhbMHNuoh pic.twitter.com/ulRV8UjgsI

Back in 2013, I ran across a most informative & entertaining series by Dave Roth, explaining the genesis of Qatar’s bid for the 2022 World Cup:

… FIFA is FIFA, which is to say it’s this sort of smuggo mafia of puffy, predatory globo-elite males in suits, all of them dedicated to extracting some sort of rent from the world’s totally helpless and justified love for soccer. And FIFA being FIFA, it has all these wildly un-transparent internal processes — everything done by design in secret, endless dodgy handshake deals between men whose handshakes are mostly worthless — that seem almost to incent lawlessness…

More recently, in 2020, questions were raised about whether the new miracle vaccines would be effective enough to prevent a global superspreader event.

And now — FIFA has been strongarmed into ‘suspending’ Russia, for the moment.

As a totally unqualified spectator, I have to assume that’s gonna screw up some of the already tight qualification scheduling between now & November, yes?

END_OF_DOCUMENT_TOKEN_TO_BE_REPLACED

“We can’t get our poorly trained & incompetently led soldiers to stop posting on social media, which allows the Ukrainians to find our locations & target their attacks. So we need you, social media platforms, to prevent our missile fodder from doing so.” https://t.co/Tx2VGaZTFP

END_OF_DOCUMENT_TOKEN_TO_BE_REPLACED

For much of last week, Jen Psaki had some really great visitors speaking about Ukraine at the beginning of the press briefings, and I am thinking that today may not be much different.

A couple of tweets while we wait.

I laughed at this and then nearly cried at the truth of it. Complicity.

A thought for all the Deutsche Bank employees who had to work straight through this weekend, figuring out new avenues to launder oligarchic capital.

(And not just DB, but a lot of big banks, law firms, and accounting firms.)

END_OF_DOCUMENT_TOKEN_TO_BE_REPLACED

In the morning thread, we briefly discussed some walk-backs from public figures like Matt Taibbi and Edward Snowden, who both pooh-poohed the possibility that Putin would order a full-scale invasion of Ukraine. Snowden went silent after events proved him catastrophically wrong and bobbed to the surface briefly to say he was avoiding pontification on the topic now since he was wrong then.

Taibbi owned up to “reverse chauvinism,” saying he was “so fixated on Western misbehavior that I didn’t bother to take this possibility seriously enough.” Huh. We’ll see if that insight bears fruit going forward. (Spoiler alert: it won’t.)

TPM’s resident lefty populist, John Judis, is also doing a backwards shuffle. He notes that he got it wrong in part because he reflexively distrusts U.S. intel after the Iraq War debacle. His publisher disagrees.

Anyhoo, “populist” (i.e., anti-immigration) politicians in Europe are also getting in on the Putin walk-back act, according to The Wall Street Journal:

What Europe’s populists saw in Mr. Putin was a kindred spirit, a leader willing to disregard the rules of international cooperation that emerged in the wake of World War II, underpinned by the military might of the North Atlantic Treaty Organization. They admired Mr. Putin’s unapologetic nationalism and his deep-seated distrust of the U.S.

That admiration is now running up against the reality of Mr. Putin’s forces pouring into Ukraine. Some populists are rushing to distance themselves, branding Mr. Putin’s aggression a setback of historic proportions.

Others are trying to strike a balance, rejecting Mr. Putin’s actions while acknowledging he has a place in their political heart.

“I think that everybody has a form of admiration for Mr. Putin, but frankly, I consider that what he’s done is highly reprehensible,” Ms. Le Pen said Friday.

“No to war, always. Yes to life, always,” Mr. Salvini, leader of Italy’s League party, wrote in a Twitter post Thursday. Mr. Salvini wrote that he “firmly condemns the military aggression” but stopped short of mentioning Mr. Putin by name.

Not to be outdone by anti-immigration foreigners who’ve also been rejected at the polls, the current leader of the GOP is combining Salvini’s mealy-mouthed avoidance of the “P” word with a risible statement on NATO, which he now claims to have saved when he publicly shook member nations down like an oddly a-muscular mob debt collector:

I hope everyone is able to remember that it was me, as President of the United States, that got delinquent NATO members to start paying their dues, which amounted to hundreds of billions of dollars. There would be no NATO if I didn’t act strongly and swiftly.

By the way, speaking of Putin, Le Pen and Trump, does anyone else remember this grotesque thing a Putin-worshiping zealot displayed at a January 2017 Trump inauguration party in Russia? 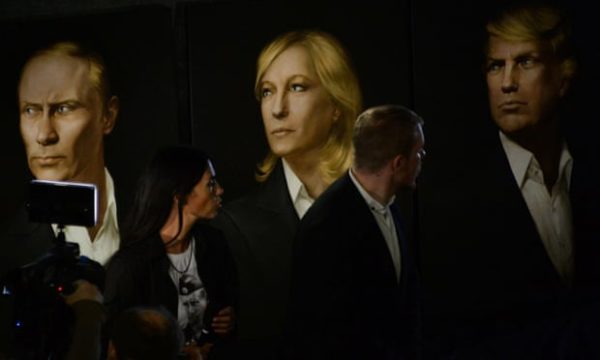 I remember being disturbed by the image as I was lounging in my cut-rate DC hotel room waiting for the Women’s March to start. It stuck in my mind due to the creepy-combo aesthetic of “Triumph of the Will” meets “The Omen.” I’d bet a small sum a copy is displayed in a private room at Trump’s Disgraceland estate in Florida right now.

END_OF_DOCUMENT_TOKEN_TO_BE_REPLACED

That is an indicator of how toxic Russia has become. FIFA thinks they look bad associating with them.

END_OF_DOCUMENT_TOKEN_TO_BE_REPLACED

Remember: nobody protected, propped up, lied, and covered for Trump more than William Barr. https://t.co/C6af4IxCql

We interrupt our current crisis... because this well-padded white shoe in plausibly human form deserves to be shunned, if not driven from society. It’s not ‘One Damn Thing After Another’, Mr. Barr; as Dorothy Parker once said, It’s the same damned thing over & over again.

Former Attorney General William Barr writes in a new book that former President Donald Trump has “shown he has neither the temperament nor persuasive powers to provide the kind of positive leadership that is needed,” and that it is time for Republicans to focus on rising new leaders in the party.

The release of the former attorney general’s 600-page book, “One Damn Thing After Another,” is coming as Mr. Trump, who remains the GOP’s dominant figure, contemplates another presidential run. Mr. Barr writes that he was convinced that Mr. Trump could have won re-election in 2020 if he had “just exercised a modicum of self-restraint, moderating even a little of his pettiness.”…

Mr. Barr, a respected figure in Washington conservative circles, returned to head the Justice Department in February 2019 after Mr. Trump ousted his first attorney general, former Sen. Jeff Sessions, an Alabama Republican. Mr. Barr served in the same post at the end of the George H.W. Bush administration and was a corporate lawyer in between.

During much of Mr. Barr’s time in the Trump administration, some said he protected the president at the expense of the Justice Department’s independence, especially over his handling of special counsel Robert Mueller’s investigation of Russian interference in the 2016 election…

Mr. Barr writes that he reminded Mr. Trump that he had “sacrificed a lot personally to come in to help you when I thought you were being wronged,” but that the Justice Department had not been able to verify any of his legal team’s assertions about mass voter fraud…

Mr. Barr resigned a few weeks later, bringing a tumultuous end to his time in office.

After the election, Mr. Barr said that Mr. Trump “lost his grip” and that his false claims of voter fraud led to the Jan. 6, 2021, attack on the U.S. Capitol by supporters trying to thwart the certification of Mr. Biden’s November, 2020, victory.

“The absurd lengths to which he took his ‘stolen election’ claim led to the rioting on Capitol Hill,” Mr. Barr writes.

He has an obligation to do more than just resign and write a book. He had an obligation to tell the public that the President he served was violating his oath of office. https://t.co/F7iLBYZVSC