For the #PeaceCorps submissions I have pulled some more photos from the time my wife and I were in the Peace Corps just after being married. We were stationed in Niger, West Africa which is a sprawling landlocked country whose terrain ranges from the Sahel in the south to the Sahara in the north. It was and still is one of the poorest countries in the world with most of its population nearer the less arid southern border, and along the Niger River to the west. The capital, Niamey, lies next to the Niger River and the Peace Corps training site was in a small village some twenty miles east of the capital.

If you missed it, my previous On The Road about Niger featured photos pulled from our time in the Peace Corps and from an experience I had just after when I returned for a month-long contract and had more freedom to explore. Those photos are here: https://balloon-juice.com/2018/11/06/on-the-road-and-in-your-backyard-236-2/. By the time this is posted there may be another On The Road with a set of stories and photos from Dakar, where we spent another two years a while after living the Peace Corps.

It is truly impossible to put a Peace Corps experience into a few paragraphs. So many indelible experiences: the preparation and anticipation of the upcoming trip, the jarring and exhilirating reality of those first few days, the struggles to learn languages and culture while adapting to the living situation, the time spent with local families and other volunteers when visiting other areas, the sicknesses, the poverty, the feeling of standing out like a fluorescent light in your wealth and other-ness, the gradual understanding of the weave and rhythm of life in a village and the realization that you are there for such a brief moment in time, the slow transition to someone who fits in at least a little better, and the satisfaction of being a good representative of the best of the USA even when the projects you worked on turned out to be far less effective then you were led to believe.

Would I recommend it? Well, bearing in mind that none but the most extraordainary Peace Corps volunteer really is going to make a revolutionary difference in people’s lives. But, as I mentioned earlier, there is value I see in being ambassadors for America, to bring understanding of our country to others and to take our experiences home and share them with others. And as a personal journey I found it both challenging and fulfilling – and also exasperating in almost equal measure. I truly was never the same person after and for me that was all for the good.

Would I do it again? We had older volunteers in our group who, it must be said, were probably the best ones as they had enough wisdom and experience to know what was important, and commanded the natural respect given to elders in West Africa. I think I am through with living there however, and am content to explore places closer to home these days. 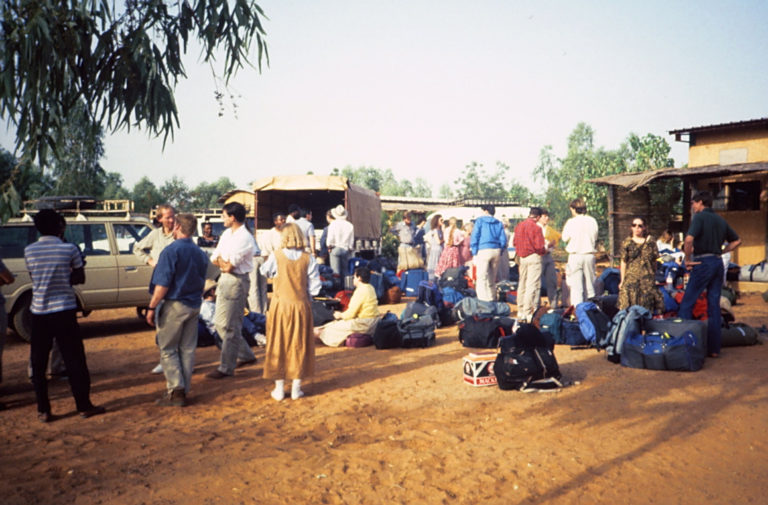 Arrival. After an exhausting plane trip, landing an airport that looked nothing like U.S. airports, and a bumpy ride in 4x4s we arrived at the training site. This photo captures well the feeling of sand, dryness, confusion and tiredness we all felt. In truth it was a bit of a jumble, sorting us all out and getting us situated. The next hours and days really were such a blur it’s hard to piece together a timeline of events. I do remember that we had very little free time, and most of us took advantage to nap when we could. 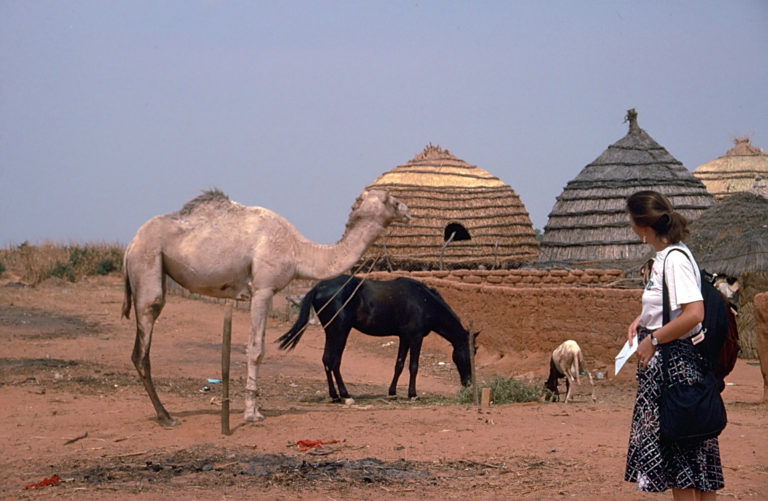 The training site itself was on a slight plateau overlooking Hamdallaye but it was large enough only for the classrooms and meeting areas. We volunteers were housed in the village itself, in houses I assume were rented by the Corps. As we were married we were assigned a larger house with two other couples. It was fairly near the plateau and on the outskirts of the village.

The house was painted mud brick with a metal roof and tiny windows. Inside it was pretty dark at all times and somewhat stifling. We soon found better sleep by moving our beds outdoors where what little breeze there was could get through the necessary mosquito netting. Light was by oil lamp mostly as batteries didn’t last long in flashlights (they all came from China – I recall them being red and having tigers on them).

But a working flashlight was a good thing to have when visiting the bathroom at night. When I say bathroom I really mean a small roofless square with a hole in the middle of the thin concrete floor. During the day it wasn’t an issue – as I said part of being a Peace Corps volunteer was learning to adapt to the living situation. But at night things were a little different when the roaches came out…

My wife loves to tell the story of one night when my adaptation skills were lowest and I had one crawl out of the hole over my foot as I was squatting and I grabbed an old discarded piece of wood and spent a good half-hour mashing as many of the creatures as I could. 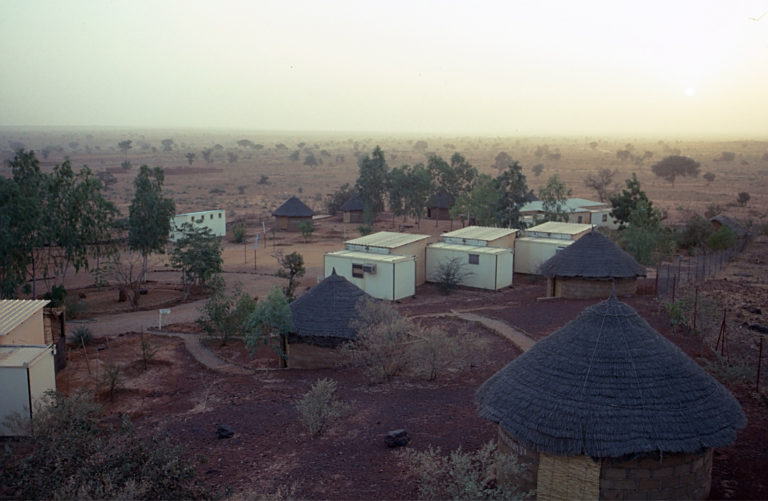 This is a good view of how the training site was on a slightly elevated plateau. This is looking away from the village to the countryside beyond which looks empty but was in reality pockmarked with little compounds and groups of houses here and there surrounding the small plots of millet that were everywhere there was a slightly lower piece of land, that had a better change of holding whatever rain that fell.

In these buildings we learned French and whatever local language a volunteer would need based on their eventual post location. My wife and I were taught Zarma, and I can still recall the greetings that were the first thing taught and absolutely the most important part of the language from a social perspective.

We learned the basics of the local culture (which to some extent could be called West African culture although there are differences of course and the more time you had in the area the more you could pick those up). But for Peace Corps volunteers the basics were something like:

* Always spend time greeting people as above, or in French if that was the preferred language.
* Never jump right into business before greeting.
* Respect elders.
* Share food always, and expect to get asked to share others’ food even when it is clear there is barely enough already. (It’s polite to say “Oh, thank you but I just ate”)
* Always shake hands – with the right hand

The language training was fun, and was something that could be practiced in the village but I found the training in “agricultural technology” to be less satisfying. Since I didn’t have any specific skill like medicine or testing I was assigned this role and learned about water conservation in the Sahel and about mud stoves to replace the “pot on three rocks” that is used all thought the area but was less efficient and safe for the women who were the cooks. It was interesting, to be sure, but it was harder to see how my little Peace Corps self was going to teach the local people about growing millet or making stoves. 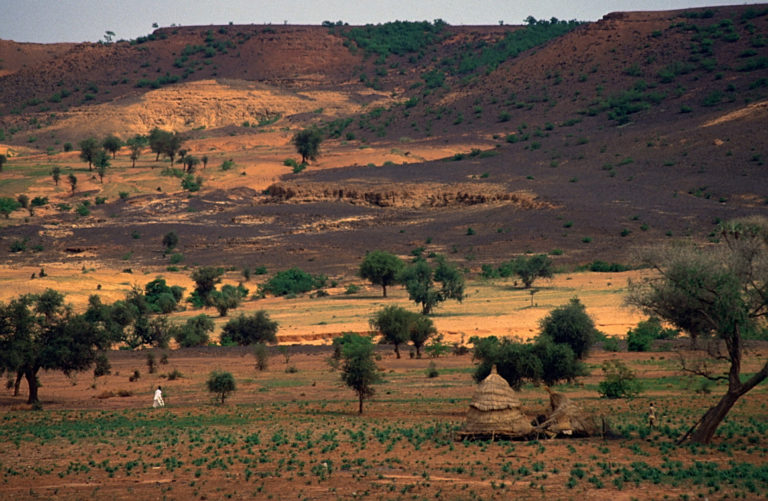 The land near Niamey, and even near Hamdallaye was mostly flat, with some plateaus like this one. While the countryside from a distance looked deserted here you can see how the little huts and millet storage silos were well camouflaged, and everywhere there were people, walking, riding burros or pulling carts, and women carrying impossibly large loads of grain or wood or water on their heads. 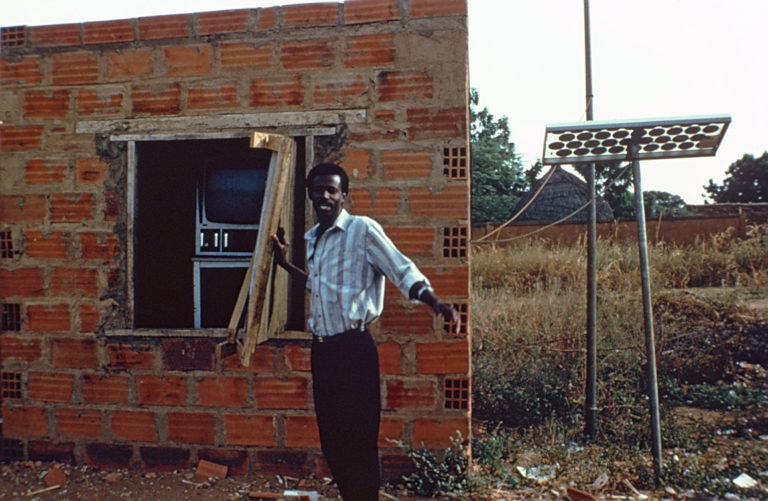 I am being shown the community TV. Solar powered during the day, in the evening the little window was opened and small crowds of villagers would gather on benches in front to watch whatever was broadcast. This was actually pretty far ranging, from newscasts in French, football (soccer, of course), local dramas and public service announcements. But amazingly enough there were American shows as well – Dallas, and other shows that seemed to be rather the opposite of what the predominatly Muslim community would watch, and one night while passing by I saw an specially large crowd entranced by “Airwolf” about crime fighting and spy hunting using an advanced helicopter. 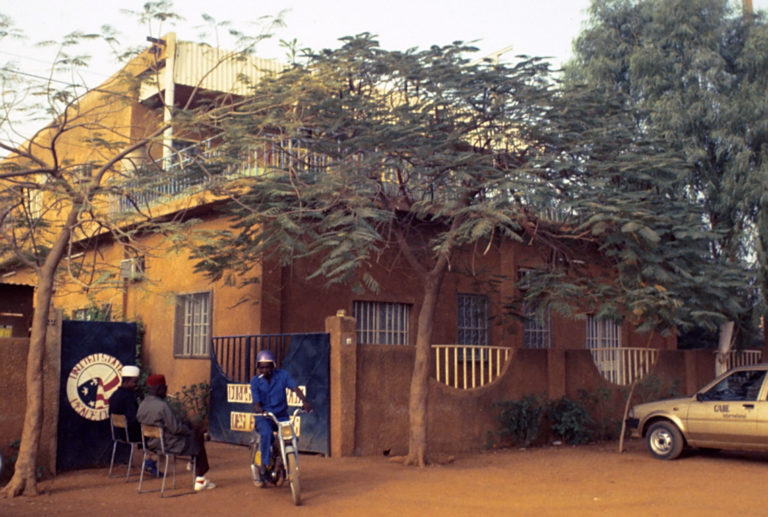 We volunteers had little cause to visit the main Peace Corps headquarters – in fact it was usually when one was sick enough to need care but not sick enough to get airlifted out of country. It was fun to go to Niamey though, mostly to visit the markets where it was easier to find things like shortwave radios or replacement flashlights or razor blades.

It was also an opportunity to visit the French supermarket – SCORE – to load up on cookies and other treats impossible to come by in Hamdallaye. 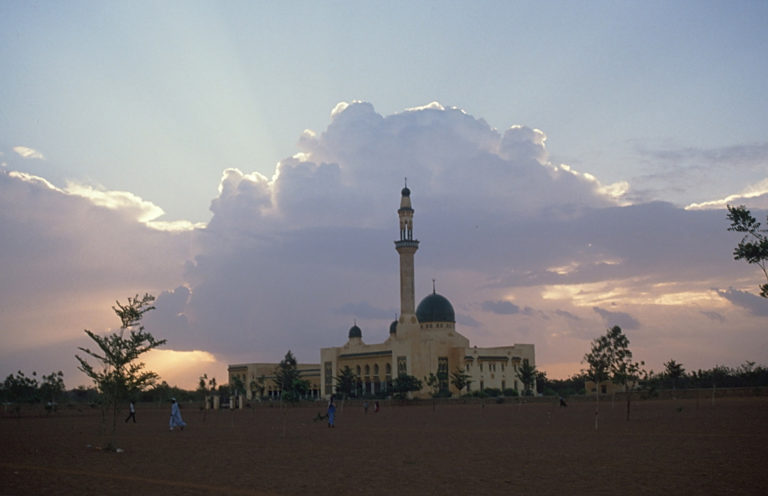 Niger (and much of West Africa) was Muslim and mosques abounded, big and small. One experience I am sure most volunteers remember well is being woken up by the call to prayer. This is the Grand Mosque of Niamey, an imposing building especially at that time.

I am not certain exactly the nature of Islam in Niger today but I know at that time I came to understand that it was genuinely peaceful and I could understand how that religion was woven into society. It is an awe-inspiring thing to be in a city like Dakar where hundreds of worshippers jam the streets on Friday afternoons, covering the ground with their prayer mats. 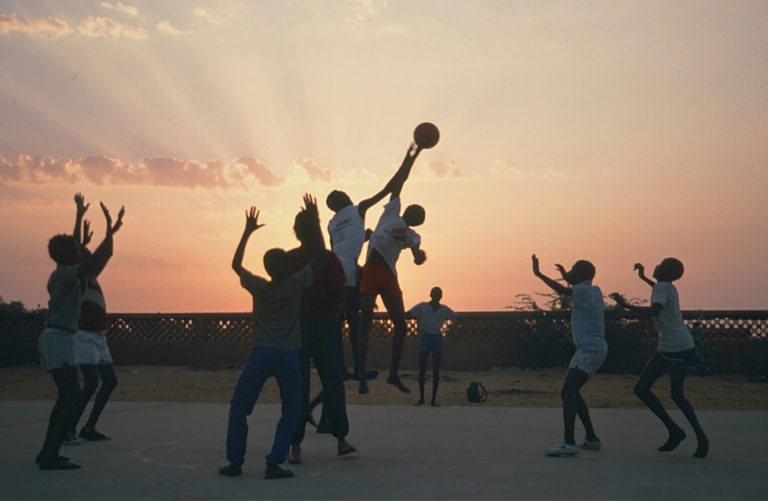 A standard part of training was being sent to visit a volunteer in another area of the country. My wife traveled to a village north of Niamey for a week while I was sent to Maradi – about 300 miles away as the crow flies. The travel was eye-opening, but I found the visit to be incredibly helpful, spending time with volunteers who had enough “dirt time” to tell me straight out what to expect.

I recall meeting them for the first time – I probably felt like a junior archeologist meeting Indiana Jones: they seemed so self assured and relaxed and so darn good with Hausa, the language spoken in that part of Niger. They took me to the French Club where I mingled with French and Belgian volunteers from their Peace Corps equivilent and with aid workers who appeared to have been living there for decades. It was heady stuff, made more potent by being able to drink French beer rather than the Bière Niger we could buy in Hamdallaye that had a distinct formaldehyde flavor, and maybe a puff or two of the forbidden marijuana which we were told would get us kicked out of country but in reality was used fairly commonly by volunteers and was apparently readily available.

On my tour around Maradi we saw the basketball court that had been built at some time by some development agency. As usual the youths were taking advantage of whatever opportunities were available to be “sportif” – usually it was soccer using whatever ball or ball-like object that was available. But here it was a real basketball, on a good court with real baskets. This photo sums up the optimism I felt seeing the industry and resourcefulness of youth in Niger.