President Biden talks about next steps to hold Russia accountable for their aggression.

? US allies are still working in lockstep to fight Putin’s aggression.

? We will defend every single inch of NATO territory and we will make sure Ukraine has weapons to defend against the invasion.

? Direct confrontation with US and NATO fighting on the ground in Ukraine would be the beginning of World War III, which we must strive to prevent.

? We are united in revoking what is commonly referred to as “most favored nation status” for Russia, making it harder to do business with nations that control half of the world’s economy  (called PNTR in the US)

? Special shout-out to Speaker Pelosi who agreed to hold off on this in the House until Biden could line up key allies to do the same thing.

? Banning imports and goods in sectors of the Russian economy: vodka, diamonds, and seafoods.

? G-7 will be seek to deny Russia the ability to borrow from the International Monetary Fund  (IMF) and the World Bank.

? G-7 is working together to add more oligarchs & families to the list who are sanctioned.  They have stolen from the Russian people and we are working in coordination to increasingly capture ill-gotten gains such as super yachts and vacation homes.

? We are also making it harder for them to buy high-end products manufactured in the US, banning luxury good sales to Russia.

?  More than 30 other countries providing humanitarian aid to Ukraine.

? Last night the senate voted to send $13.6 billion in additional aid to Ukraine.  Looking forward to signing the bill.

? We will welcome, should welcome, Ukrainian refugees with open arms.

? Putin’s war against Ukraine will never be a victory.  Putin has failed.

? These are not the last steps we will be taking.

If you want to watch, the President begins at minute 31:20 and ends at minute 40.

Last night either Omnes or Martin (can’t remember which one!) shared that one idea being explored as an alternate to the MiG idea is ending S-300s from former Soviet aligned NATO members could possibly go to Ukraine.  More or less the same deal, the US will backfill transferred units with US made equivalents.

Here’s more information about S-300s, which has been added to the War in Ukraine lexicon that’s available under WAR IN UKRAINE in the blue category bar up to;

S-300
The S-300 is a Soviet designed long range anti-aircraft unit. These things are big – bigger than tanks, but not armored. They can hit targets up to 75 miles away, depending on model. These could be driven across the border, so no need to fly in, and they aren’t really a threat to targets inside Russia so unlikely to be views as an offensive Ukrainian weapon. It can also target cruise and ballistic missiles, so would provide Ukraine with additional defense against them.

Also, this is an interesting cover. 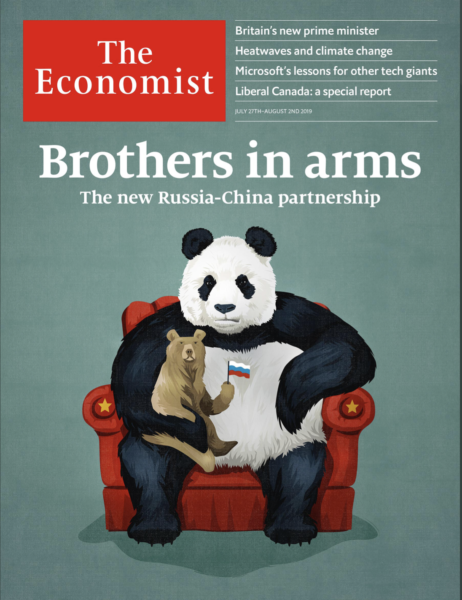 It of course makes Putin look the fool for considering any new arrangements with China to be a partnership.

Any thoughts on that or anything else?  Open thread.

Previous Post: « T(*All* the)GIF Open Thread: Moving Toward A New ‘Normal’
Next Post: The Audiovisual History of an Ear Worm