Live Oak is a small town in North Florida. It’s named after the sprawling trees that often reach across roads and open spaces to form shady canopies. I know it well since I have family in the area.

It’s a conservative community where Republicans outnumber Democrats by about two to one. Trump got more than 75% of the 2020 vote in Suwannee County, where Live Oak is the county seat and home to this charming old courthouse, pictured below in a photo taken in the 1940s. 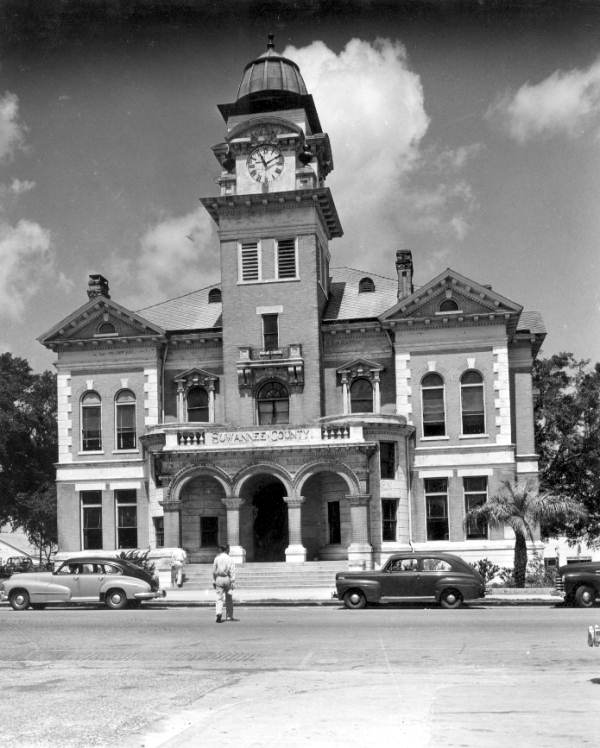 Live Oak is also home to Ms. Jean Eckhoff, who teaches history to middle school and high school students in the town. Eckhoff was interviewed by New York Magazine in a feature story on Florida’s “Don’t Say Gay” bill, which the governor is expected to sign into law soon. DeSantis signaled his intent to sign by recently thanking the wingnut state legislature for passing the bill and “letting me and my wife be able to send our kids to kindergarten without them being sexualized.”

The governor is saying that teachers like Ms. Eckhoff, who’s been at her current post for 17 years, are a threat to children. Eckhoff heard him. She describes being a gay teacher in Live Oak, Florida and the threat the bill poses to her livelihood:

Under a bill proposed by Republicans in Florida, just saying those words could cost Eckhoff her job. “I feel targeted,” she says. “It would be very easy for a parent to say, ‘There’s my dyke teacher teaching my kid to be gay,’ and sue the school.”

It’s important to note that DeSantis and other Florida Republicans always lie to the public about the bill’s content, which the article thoroughly unpacks. When state officials aren’t suggesting that the bill’s opponents are pro-pedophilia by calling it the “Anti-Grooming” bill, they pretend it’s about parents’ rights. Parental rights have have been the fake theme of the just-concluded legislative session, which also banned discussion of CRT and mask mandates, etc., under the same rubric.

Emphasizing the vigilante component of the Don’t Say Gay bill, NYM calls it the “Don’t Discuss Anything About Queer or Trans Existence and Don’t Counsel Trans or Gay Kids (Instead, You Must Out Them to Their Parents) or Else Parents Can Force a State Investigation of the School, Get Money Damages, and Probably Get You Fired” bill. That sounds about right. But Ms. Eckhoff doesn’t plan to knuckle under to the bullies:

Still, Eckhoff says that if the bill becomes law, she won’t back down. “When I first saw the headline ‘Don’t Say Gay,’ I thought, I might lose my job over this,” she says. “But now I say, ‘Bring it on.’ I’m not asking for trouble, but I’m 52 years old — why should I play this game? I can’t go along with this. This is my life.”

She’s a hero in my book, and she’s one of millions of other Floridians who did not ask for and will not accept this bigoted bullshit. I’m not sure what will happen this week, let alone in November. But I do believe people like Eckhoff in Florida will ultimately prevail over the DeSantis types.

As Gandhi said, “When I despair, I remember that all through history the way of truth and love have always won. There have been tyrants and murderers, and for a time, they can seem invincible, but in the end, they always fall. Think of it — always.”