You are here: Home / Nature & Respite / We All Need A Little Kindness / Acts of Kindness: Helping Ukraine

First of all, I was a bit under the weather last night and didn’t get to putting this post together, so my apologies.

Second, I try to make the mid-week kindness post as place to take a moment away from the ongoing stress around us. But this week, everywhere I turned, there were stories about Ukraine I wanted to highlight. So tonight, I’m making an exception to my self-imposed rule.

Adam has posted this a couple of times, but I worried it got lost in his very, very complex posts. So I decided to begin tonight with it:

From the very beginning of #war the Mykolayiv Zoo was bombed. Half of the staff was evacuated, some of them went to war.

The Director Volodymyr Topchyi decided to stay and to help stressed animals. He asks for support by buying e-tickets ?

This one I stumbled upon:

A woolly mammoth tooth is helping the people of #Ukraine. Meet the #NH fisherman behind the idea tonight at six on @NBC10Boston pic.twitter.com/dET5XThQdC

The woolly mammoth tooth found by fishermen off Newburyport raised over $10,000 at auction, with proceeds headed to Ukraine.

The highest bid was $10,300 from Dan Healey. Healey, who lives in Merrimac, is the founder of ARC Technologies, according to the Newburyport Daily News.

Healey’s donating the tooth — which weighs about seven pounds and measures about 11 inches long — to Newburyport Maritime Museum, according to NBC10 Boston.

The money will head to World Central Kitchen, which is providing meals to fleeing Ukrainians, the news station reported.

The tooth is thought to be between 10,000 and 15,000 years old. The large, furry mammals are thought to have roamed the Earth until about 4,000 years ago, according to National Fisherman.

It’s difficult to fathom sometimes how old the Earth is. Then a piece of its ancient past shows up to remind us.

That’s what happened when a crew of fishermen, dredging for scallops off Newburyport, found something large, brown, and rigid among the typically water-warped scallop shells.

“I looked back and saw what looked like some kind of arthropod stuffed into the pile,” Asher Molyneaux, captain of the Finlander II, a scallop boat, told National Fisherman. “I went back and grabbed it, and said, ‘That’s a mammoth tooth.’ I don’t know how I knew that, I must have seen a picture somewhere.”

The tooth dates back many millenia, according UNH paleontologist William Clyde, who told National Fisherman it’s probably between 10,000 and 15,000 years old. Woolly mammoths roamed the earth until about 4,000 years ago, the publication said.

I follow Yo-Yo Ma and he posted this earlier this week:

My name is Denys Karachevtsev, I am a cellist and a citizen of Kharkiv. I love my heroic city which is now struggling to survive the war. I deeply believe that we can help. I believe we can restore and rebuild our city and our country when the war is over. I am launching my project on the streets of Kharkiv to raise funds for humanitarian aid

Steeplejack and Adam both sent this to me. If you can, click through to twitter, to read updates:

2/n I went down to welcome. We could communicate with google translate. The driver said he would like to help them carry up the luggage ?into the flat, the single bag they had was smaller than my laptop bag and the cat cage. I sensed he wanted to check inside.

3/n I showed him sleeping kids and id to ensure him. He smiled, gave me a phone number and left. The family have been on the road for 4 days. „How long can we stay?“ „let’s sleep and talk tomorrow“ a conversation in silence. The three and 15 y/o were nervous.

4/n I could not sleep. Now the war came home, I thought. Can we handle? The next morning, they woke up early and asked again „how long can we stay? I need health insurance for my son. He is sick. We need to be registered.” I sensed a mom in max. functioning mode.

5/n before my work started we rushed to get some urgent shopping to supply cat and kids. Then We gave her internet access and room to calm down after this journey. Once they realized being in security, they all slept, all day and all night.

6/n kids started to play, without being able to verbally communicate. The cat would sleep on husbands desk. Sometimes people asked: isn’t it difficult? No. At least I can give them something. A sense of comfort to people who were chased away from their home.

7/n “my friends also need a place to stay.” When I started the call to #berliners on tweeter, the response was overwhelming and all families were distributed (thank you all!). Whenever she sensed such generosity and empathy, she would break down and cry, without kids noticing.

8/n unintended, I started to build up a little network of helpers across entire Germany, who were taking them over, once I forwarded. “Can you host?” “Yes. When shall I pick up?” Sometimes we did not know what their names were. We would just bring them to the station and tickets

9/n The band of trust we all had was so strong. The people in need would travel across country with my phone number only, with a certainty, they are being helped. We were all very moved. And when the little girl, shadowing her mom every second, held my hand, I cried.

10/n yes, we were 8+cat in our flat. We both have busy jobs and three little kids. Wasn’t this overwhelming? No. I could do something in my own way. I cannot solve big problems. But giving them comfort, helped me to focus. To focus on what actually is happening and how we live.

11/n when the war started to destroy, on the other side, the band of empathy restored the faith. I am very grateful for all the silent helpers who acted unconditionally. I sense so much love for them. They demonstrated the true value.

Addendum-This tweet receives so much attention, I am very surprised. There are estimated ~10k refugees a day coming into berlin. Above, many stay in Poland, who incredibly help refugees. Berlin is only <10h car-ride from the Ukraine boarder. We see Ukraine cars everywhere in town

Many Berliner host refugees now and you hear more ukraine everywhere. Many volunteer otherwise, as helpers at the main station, as a driver to drive down the donated goods, as translator. Everywhere, supplies are collected for refugees. Public transport and railways are for free

Schools and kindergarten are making special Programms to make the refugee kids to feel comfortable. Kids and parents are being prepared beforehand, to welcome those. Night trains are being prep so that refugees can sleep a bit at the station to continue their travel on next day.

I am incredibly grateful how many ppl I connected with this. A colleague, who drove hours to host a pregnant woman due in 4weeks + kid (!!). When a mom-daughter were at the main station, not knowing where to go, a colleague just hurried over, picked them up and took them home.

I know it seems like a lot right now to deal with, so I thought this last one, from everyone’s favorite Guncle (well, except maybe William Shatner) on coping, sent to me by Redshift:

These are very trying times, friends. Going from Covid to a war in Europe reminds me of when we went from an attack on Pearl Harbor to the horrors of a Japanese American internment camp. The world can shift under your feet, and nothing can prepare you for the chaos of it. /1

But trying times are also periods of great personal strength and growth. You can surprise yourself with the resilience you build. As the Buddhist saying goes, “Wisdom is like rain water: It gathers in low places.” /2

Take time to care for yourself and your loved ones. Remind yourself what matters. The suffering of others is difficult to witness, but it is a reminder that we share a common humanity, and it is a moment for those rarest of human treasures: empathy and compassion. /3

Be kind to strangers. Think of them as your own kin. Do not grow numb to the horrors you see or read of, whether it is far away lands or at our local ER where the pandemic still kills in the thousands daily. These are chances to discover our humanity, our bonds to one another. /4

Above all, do not despair. When you ask yourself, “What can I do, just one person against this tide?” begin by placing your heart with those who suffer, and it will tell you what you should do. Even that very act of spiritual alignment will be felt and recognized by others. /end 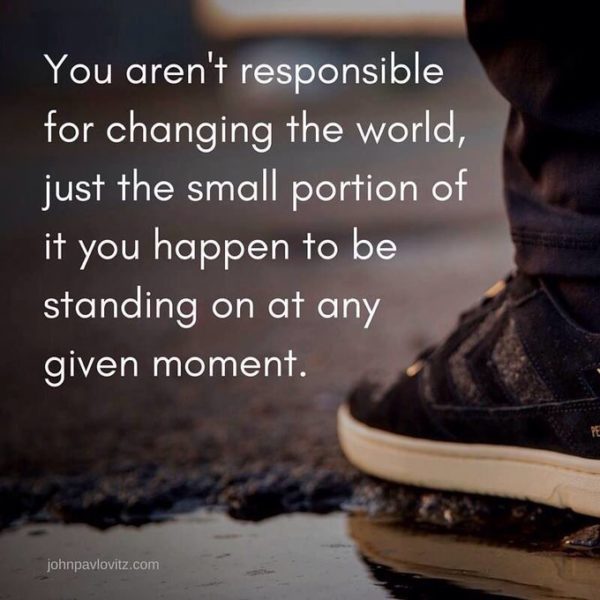 And finally, because this is, after all, Balloon-Juice and I know my audience, I’ve been saving this one for a week when we all need a good “aaawww” moment. You know those big dogs have a special place in my heart:

I have about twelve kindness links from folks, bookmarked in my inbox, so we’ve got a few weeks locked up. But keep them coming, because I think we all need a little break mid-week for quite a while.