You are here: Home / Authors In Our Midst / Bud Gundy – The Story of Darcy O’Brien!

Our author today for Authors in Our Midst is Bud Gundy, whose book was just released today. Let’s give a warm welcome to Bud!

If you are an Author or an Artist who is interested in having your work featured, just let me know. 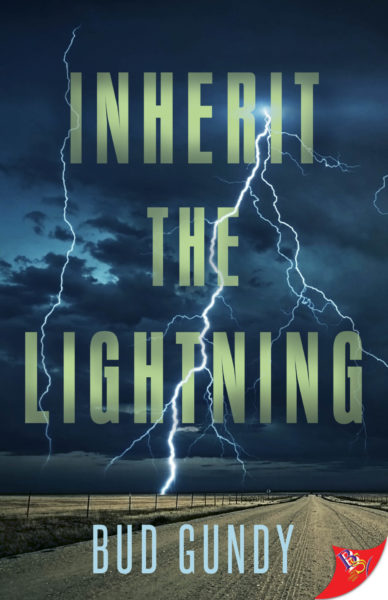 “Gundy’s writing has a you-are-there vividness that perfectly complements his bigger than life characters and the sweeping story he tells.” – Felice Picano, author, editor, and co-founder of The Violet Quill.

If you live in Northern California and you recognize my name, right about now you’re reaching to turn off the radio or TV. Yes, I’m that Bud Gundy who asks you to support KQED public radio and TV during the pledge drives!

I’m also a writer and I’m thrilled to announce my novel, Inherit the Lightning, has been released by Bold Strokes Books as of this morning, and is available on their website until May 13 when it goes on sale everywhere.

The story follows Darcy O’Brien, who is searching for a mysterious person claiming ownership of a long-rumored, immense family fortune he and his sisters are about to inherit. A gay man in his mid-30’s, desperate for cash, and with a dead-end career, Darcy is determined to do whatever is needed to secure the inheritance for his family.

The search takes amazing turns as Darcy learns the truth about Cooper Tiller, his great grandfather who amassed the newly revealed fortune. Although Coop died decades before Darcy was born, his astonishing example proves far more valuable than money. It reveals a family secret hidden for 70 years, a much older truth about Coop himself, and it transforms Darcy’s life.

When I started writing this story more than two years ago, I had a much different trajectory in mind until a friend, taken with the description of the family mansion Cooper Tiller commissioned in 1920, insisted I tell the backstory of the house. I tried every imaginable angle, even the people who float by on a variety of boats over the decades (the house overlooks Lake Erie just outside of Cleveland).

None of it worked, and in desperation I wrote a character sketch of Cooper Tiller, who was never supposed to appear in the story beyond old family photos. I made it difficult on myself by deciding Coop was born into a poor farm family in 1880 and he became extremely wealthy as the owner of a coal mine (and yes, I deal with the toxic effects of coal). But how does a penniless farm boy from central Ohio come to live in coal country and own land? How do you find coal and build a mine?

Coop’s story swept me away, and I knew I had to make him a central character.

Coop and Darcy connect in a myriad of ways, including their understanding of animals, an abiding sense of their own unworthiness when it comes to love, as well as a startling resemblance. And in the end, a piece of advice handed down from Coop himself provides the final push Darcy needs to take a chance on love with a man he’s had his eye on for years.

I had an enormous amount of fun researching and writing this family saga, and I carefully calibrated the mystery to match the revelation. I even stumbled into a connection to a screen legend from Hollywood’s golden age, and I couldn’t resist a brief scene when Coop meets a toddler whose name you are certain to recognize!

My previous works published by Bold Strokes Books include Somewhere Over Lorain Road, a family story and murder mystery that was shortlisted for a 2019 Lambda Literary Award. Another, Accidental Prophet, is a sort of sequel to my self-published novel Elf Gift, and while it appears to be supernatural, it is actually a science fiction story, with the secret revealed in the as-yet unwritten third and final installment.

Bold Strokes Books is one of the world’s largest independent LGBTQ+ publishing companies, producing a diverse collection of LGBTQ+ general and genre fiction, including romance, mystery/intrigue, crime, erotica, speculative fiction (science fiction/fantasy/horror), general fiction, and, through the Soliloquy imprint, young adult fiction. Since its inception in 2004, the company’s mission has remained unchanged: to bring quality queer fiction to readers worldwide and to support an international group of authors in developing their craft and reaching an ever-growing community of readers via print, digital, and audio formats.

I love hearing from readers through my website at www.budgundy.com.