You are here: Home / Open Threads / Foreign Affairs Open Thread: Repubs, Scrambling to Get Back on the ‘Popular’ Side 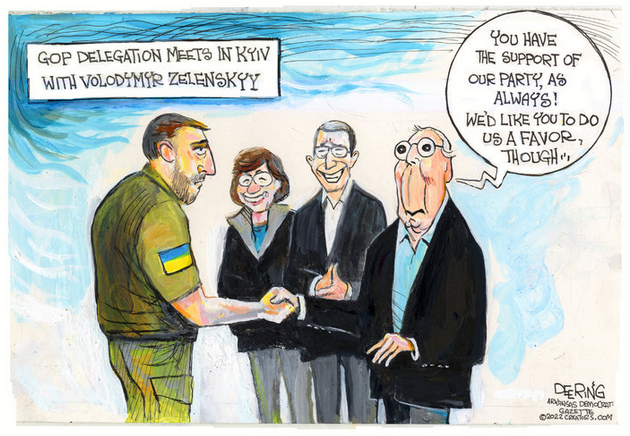 cool of zelensky to be polite to the fucks who let trump get away with attempting to extort him and withholding vital weapons that would have saved lives https://t.co/gDDgc06b6k

Note: It's smart for Zelenskyy to meet with Republican Senators. It's a way to get commitments of continued to support if Republicans take both houses at the midterms.

President Zelensky welcomed US delegation to Kyiv led by Sen Mitch McConnell today. Zelensky said it’s “a strong signal of bipartisan support for Ukraine.”
“Thank you for your leadership in helping us fight not only for our country, but also for democratic values ​​and freedoms.” pic.twitter.com/amTIudErkb

“I have a message for Zelensky. Send Lavrov to deliver it”

“Then get McConnell to do it!”

Recently drove across the US via the northern Midwest and the amount of visible pro-Ukraine support was astounding. Every tiny town in deep red states like N Dakota & Wyoming had as much or more pro-UA things as Trump flags. A clear winning issue for Dems & moderate republicans.

Lucky for #MoscowMitch & Co, he can always count on Politico to carry his water:

In interview, McConnell tells me he called Biden before Ukraine trip & said he wanted to blunt Trump’s influence by reassuring allies that “Republicans still believe NATO is important.”https://t.co/neFu3vLali

TFG could give a flying phart about Ukraine; #MoscowMitch is busy juggling the demands of his puppetmaster Putin with those of his ever-ambitious fellow GOP Death Cult quislings, like Young Prince Rand…

donald trump thinks he should be on television and you should give him money. that’s the sum total of his entire world view. he’s an incredibly easy person to understand.