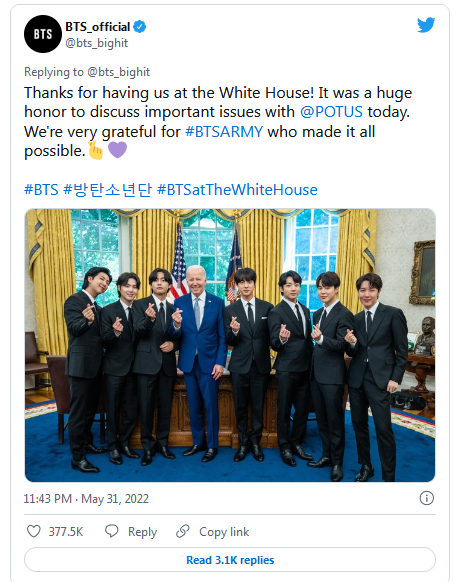 In a rational world, I’ve been reminded, the executive head of the world’s most powerful nation would not be the person assigned to grip’n’grin with pop stars. On the other hand, President Biden seems to have enjoyed himself… and so did the BTS kids!

As Asian-American/Pacific Islander Heritage Month wraps up, and LGBTQ+ Month begins, the top-selling global pop stars stand at the WH podium to say that differences are to be celebrated, not feared. Per the Washington Post:

… [S]cores of interested journalists, many of them of Korean descent, packed the aisles at least a half-hour before the briefing was supposed to begin — making the already cramped room even more stifling. Veteran journalists quipped that the briefing room hadn’t been that crowded since the days of Sean Spicer as press secretary, when the sessions became must-see TV for all the wrong reasons, at least for the Donald Trump administration.

Tuesday’s live stream of the White House briefing usually attracts a few hundred interested viewers. But well ahead of the start of the 2:30 p.m. session, about 11,000 had settled in for the show. Ten minutes before the briefing, about 71,000 were online. A couple minutes after the official start of the briefing — which started a few minutes behind schedule — a whopping 197,000 were watching.

More than 300,000 were still on the live stream as Deese, the White House’s director of the National Economic Council, stepped up to the lectern and began to speak. (The viewership numbers declined precipitously the longer Deese talked about inflation.)

“Okay, so I get to go home and tell my kids that BTS opened for me,” Deese said, as reporters laughed. “I did not expect that when I woke up this morning. And I know that you’re all here to talk about trimmed mean inflation, and you’re as excited about that as you are for them.”

It was great to meet with you, @bts_bighit. Thanks for all you’re doing to raise awareness around the rise in anti-Asian hate crimes and discrimination.

I look forward to sharing more of our conversation soon. pic.twitter.com/LnczTpT2aL

.@JoyAnnReid on Korean pop mega stars BTS joining the White House daily press briefing on Tuesday to make remarks, with the help of a translator, about Asian inclusion and the ongoing crisis of attacks against Asian-Americans. pic.twitter.com/mhTWnjjXSG 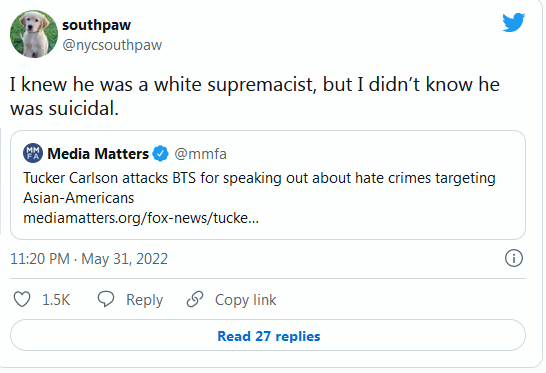