anyway, today would be a great day for bennie thompson and liz cheney to announce that they're hauling ginni thomas up in front of congress 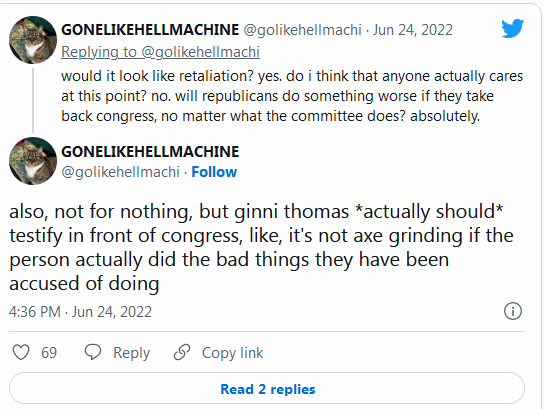 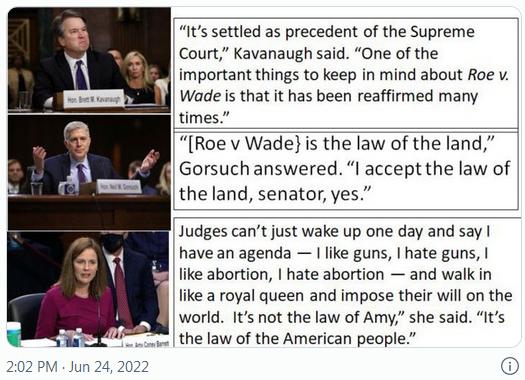 Mr. Charles P. Pierce, at Esquire, “The Hard Right Has Gotten What It Paid For”:

The two sides were kept apart in front of the Supreme Court by police barriers manned by Capitol Police. The Court itself is completely garrisoned with both barriers and ten-foot fences. This week, the Court ruled that you can carry your concealed Glock anywhere. Except, apparently, down the sidewalk in front of the Supreme Court. Given Friday’s events, this would seem to be a good thing…

You get what you pay for. And, on Friday, they got what they’ve dreamed of. The increasingly useless Chief Justice voted against overturning Roe, which was accomplished by a 5-4 vote, but he voted to uphold the Mississippi law that was the vehicle for doing the former in the first place. Nice work, there, John. And remember when everybody was screaming that Vermont shouldn’t be allowed to dictate marriage law to the whole country? Women’s bodily autonomy is now controlled by the state legislature of Mississippi, a state that has a worse rate for infant mortality than either Kuwait or Lebanon.

You get what you pay for. The decision was delivered by Justice Samuel Alito, who is running those parts of the Court these that Clarence Thomas is not. And here we go…

2. Alito’s crocodile tears about enflamed debate and deepened division are goddamned insulting. The Court’s decision on Friday was a victory for clinic bombers, for murderous snipers, for the stalkers of doctors and their children, and for vandals of all kinds. Eric Rudolph won on Friday. So did Paul Hill, and John Salvi, and James Kopp. Ask a clinic escort who it was that “inflamed debate” after Casey managed to keep Roe on life-support for the last twenty years. Ask a doctor wearing kevlar who it was that “deepened division.”…

The shade of Ben Franklin’s sister: A theocracy, if you can enforce it…

@Popehat Watching lone woman in her late 50s, on sidewalk of main street in Leavenworth, WA this morning. Holding up “FUCK SCOTUS” sign and expressing generalized derisions toward certain Justices, but otherwise not obstructing anything. She’s now getting a visit from two cops.

Cop #1 tried to talk Cop #2 down. But then a younger woman who’d had gone to high school with Cop #2 stopped and stripped the bark off him. Had a chance to talk to her too. Cops then just affirmed no violence, no private property, stay on the sidewalk, then left. pic.twitter.com/bl8ESBc3sI 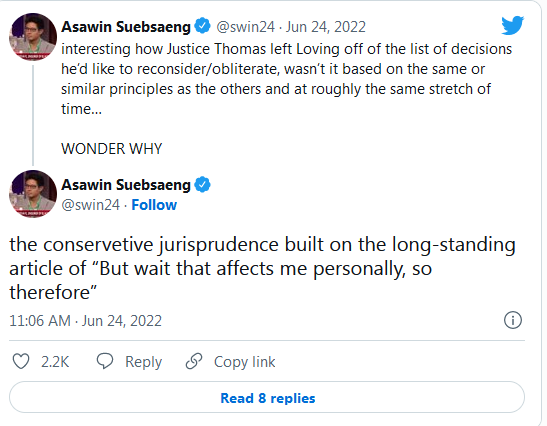 Today is a good day to talk more about Clarence & Ginni Thomas pic.twitter.com/ta5GupxAEb

Friday Night Open Thread: There Will Be Blood
Next Post: The Day “The Handmaid’s Tale” Happened In America »