You are here: Home / Civil Rights / GOP Death Cult Open Thread: We Need to Make Sure It Does Not Go Well for Them

Operatives whose side has lost the popular vote in 7 of the last 8 POTUS elections have opinions about how dumb Democrats are https://t.co/uDfC7uf7i1

A male journalist talks to other men:

… In conversations with over a half-dozen Republican insiders, who were granted anonymity to discuss the political ramifications frankly, there was a lingering sense of skepticism that abortion would still be a major issue in November and a belief that, even if it is, it might actually redound to the benefit of the GOP.

This wasn’t to say abortion wouldn’t matter in the midterms, but that the issue wouldn’t make a decisive difference at a time when voters have other problems on their minds. “Democrats are going to run on this but they are only going to run on this because they have no other choices this cycle,” one national Republican operative said. “It’s all they have at the end of the day when inflation is high and the economy is sagging.”

A D.C.-based operative noted that “in the immediate few weeks, there will be a lot of outrage as the dust settles, but this is a state-by-state, district-by-district issue.” The operative added that while the Dobbs decision might cause Democratic voters to turn out more heavily in deep-blue areas, there is doubt within GOP circles that this will cause a surge in Democratic voters in Texas or Florida. “People don’t notice abortion on a daily basis,” the operative argued. “They notice how much bacon costs for their kids and how much gas costs to fill up their car.”

There was some sense that the Court’s ruling was “a double-edged sword,” as one social conservative activist acknowledged. “It could help Democrats by reinvigorating them and pumping them up to get angry and turn out in the midterms, that could happen.” But there was also the belief that there are only limited gains to be had in the midterms. As the national operative explained it, “the problem that Democrats have here is that people who really care about abortion and are single-issue pro-choice voters are already all voting Democratic. If you dive into the polling, they are already squeezing every bit of juice out of young college-educated women, who are the group of people most motivated by this.”

And some of the Republicans thought it could actually be a net plus for the GOP in the fall. This was not because of the impact of the issue per se, but a sense that Democrats would turn it into a self-inflicted wound. “Democrats are going to overplay their hand,” one well-connected Republican predicted. “They overplay every hand they get.” The insider thought, for instance, that “there’s going to be violence and [Democrats are] not going to denounce the violence.” Another red-state operative put it more bluntly: The sight of “a bunch of pink-haired women lighting fires in the streets” was not going to motivate moderate pro-choice women to vote for Democrats…

That doesn’t necessarily mean the midterms will be disconnected from the court’s decision, or fail to have an impact on the debate over abortion. “The first elections after Roe are going to determine a lot moving forward,” the social conservative activist suggested, and that might not be a good thing for the Democratic Party. “If the GOP wins huge majorities after the Democrats have made abortion the centerpiece of the midterms, Democrats will have lost so much political influence on this issue.”

Ergo, it’s our job to ensure that the Democrats win huge majorities, thereby highlighting how out-of-touch the Republican party really is… 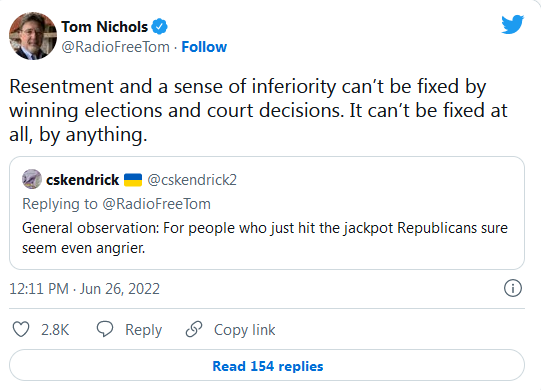 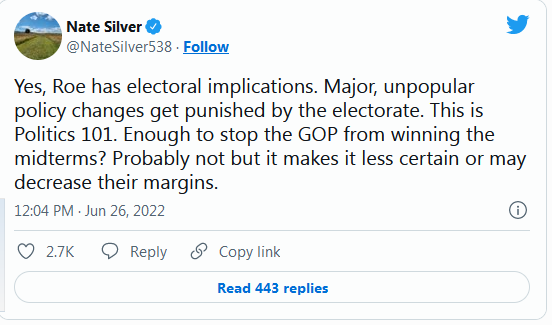 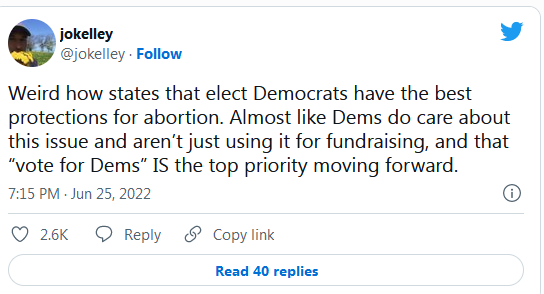 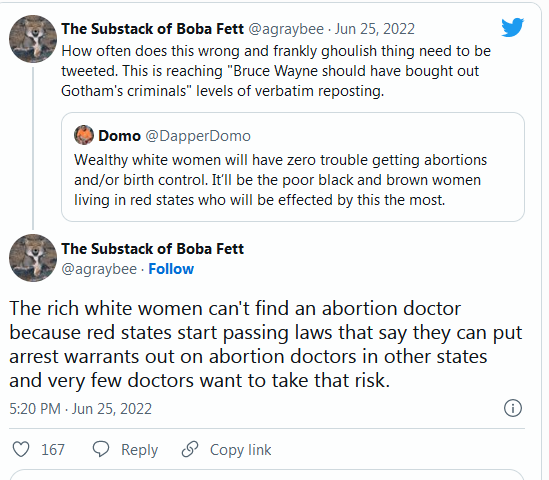 broke: arguing about which democrat deserves the most blame for republicans overturning roe v. wade

woke: donating to key pro-choice state legislature/governor candidates in swing seats that will be on the front lines protecting reproductive rights