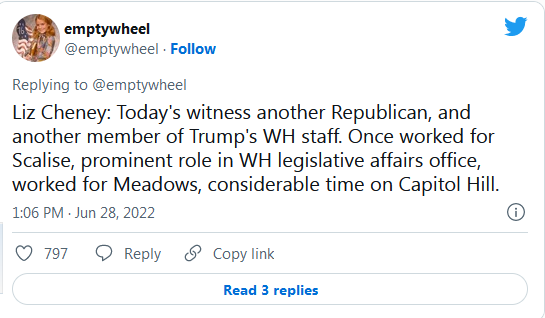 … Which was, after all, Cassidy Hutchinson’s job…

Again, this is enough for even the feds to very seriously consider charging him on an incitement theory.

Your average DA would already be tipping off the press about when and where to film the perp walk.https://t.co/4ou7Y0lw24 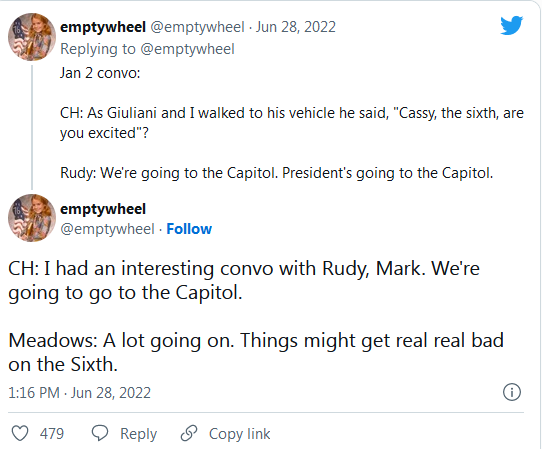 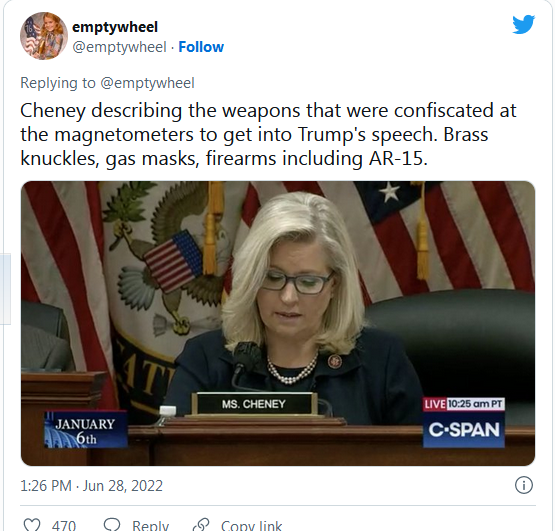 Keep in mind, her testimony is devastating mostly bc she heard & saw a lot bc she worked for an ignoramus who didn’t conceal his involvement in the coup. But she wasn’t a planner or participant. Imagine what could happen if—likely when—one of those guys flips & goes public https://t.co/cKPrY3N6Sg

1- Meadows and Trump knew there could be violence on Jan. 6 and enabled the mob...
This is the closest we have come to confirming that Trump wanted the armed crowd to march on the Capitol. His attempt to facilitate an armed mob storming the Capitol will be a critical fact in the decision whether to charge him.

When Hutchinson warned Meadows that the mob was getting close to the Capitol, he ignored her — even apparently slamming a car door twice as she tried to speak to him. When she finally did convey the information, she said Meadows had a “lack of reaction.” All Meadows wanted to know was how much longer Trump had left in his speech…

2- Trump’s advisers knew that Trump could be exposed to criminal charges.
Hutchinson testified that Cipollone tried to edit Trump’s “Stop the Steal” speech both for legal reasons and for how it would be perceived. The inflammatory elements remained.

Cipollone also weighed in on Jan. 3 against Trump’s request to march to the Capitol on Jan. 6. Hutchinson said Cipollone told her, “We need to make sure this doesn’t happen. We have serious legal concerns.” He again pleaded to make sure Trump didn’t go up to the Capitol on the morning of Jan. 6 because, as Hutchinson recalled him saying, “we’re going to get charged with every crime imaginable.”

3- Trump went ballistic when he was told he couldn’t go to the Capitol.…

4- Trump’s ring leaders asked for pardons.
Hutchinson testified that Giuliani and Meadows both requested pardons from Trump after the insurrection. This follows revelations from the committee last week that a number of Republican members of Congress also sought pardons. Any prosecutor would use this as evidence of guilt.

5- Other Trump aides are cowards and dissemblers.
Hutchinson’s appearance before the committee placed a spotlight on the list of Trump aides who have refused to come forward with their eyewitness testimony, including Meadows, Ornato, Cipollone and others. In fact, Rep. Liz Cheney (R-Wyo.), the vice chair of the committee, read statements from unnamed witnesses that they had been warned by others to be “loyal” to Trump, suggesting the possibility of witness tampering… 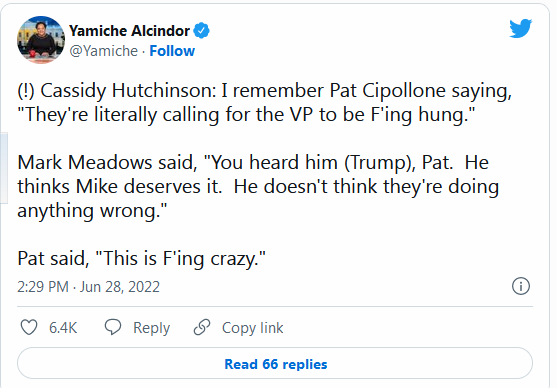 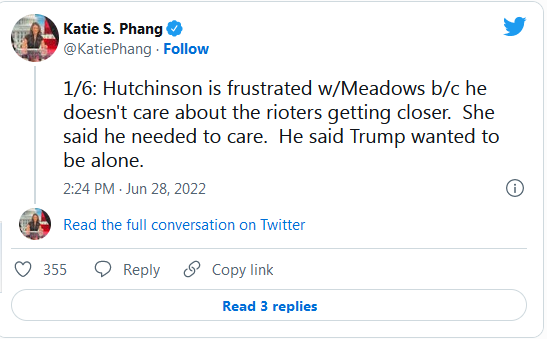 The rioters broke into the Capitol. She sees Cipollone go to Meadows’ office (who is on his phone) and tells him about the riots. Mark said: “Trump doesn’t want to do anything.”

Pat told Mark that something needed to be done or else there would be blood on their hands.

A few minutes later Jim Jordan calls back Meadows. She goes to dining room to tell Meadows Jordan called back. Meadows took the phone w/door propped open to talk to Jordan. She could hear Trump & others talking about the “Hang Mike Pence” chants.

Then, Pat said “Mark we need to something more. They’re literally calling for the VP to be f****g hung.”

Hutchinson: Trump also said to Meadows that Pence “deserved it.”

Hutchinson: “As an American, I was disgusted. It was unpatriotic, unAmerican. We were watching the Capitol being defaced over a lie.” 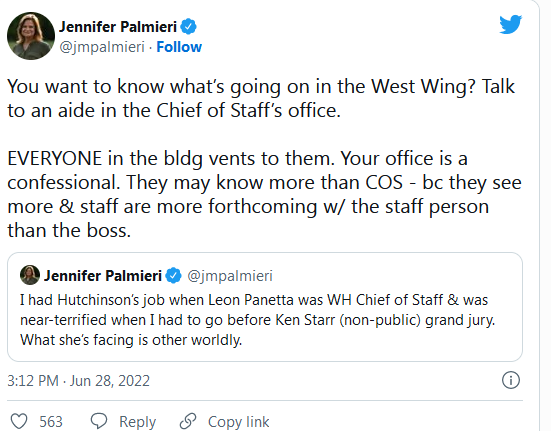 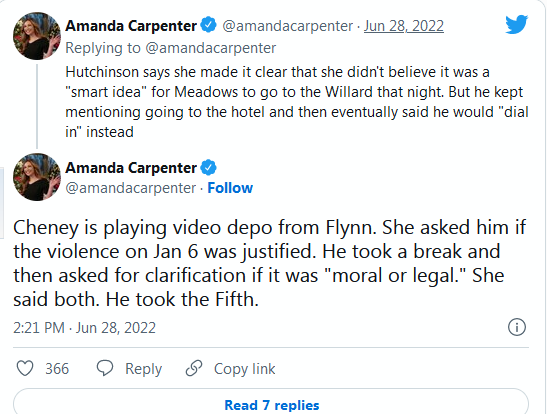 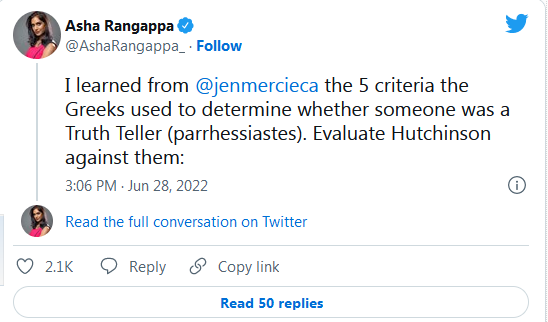 1. FRANKNESS: Saying all you know

2. TRUTH: Speaking what you know to be true

3. CRITICISM: Criticizing those in positions of power

4. DANGER: Speaking truth despite a risk to your safety

5. DUTY: Feeling obliged to tell the truth, despite the risk 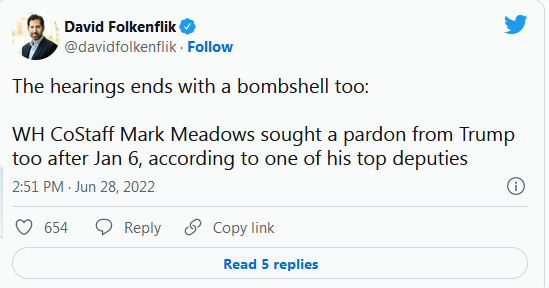 Within an hour or two Republicans will be sending out fundraising emails with video of them throwing their lunches against the wall https://t.co/ZorGQ6ZoTS

Bret Baier crushes Trump on Fox after the hearing, leaving his guests in stunned silence when he is finished. Very satisfying watch. “He says she’s lying. Cassidy Hutchinson is under oath, on Capitol Hill. The president is on Truth Social.” pic.twitter.com/frWFAguy4E

Jesus Take the Wheel
Next Post: War For Ukraine Day 125: NATO Is Set To Expand. The Price Will Be Paid By the Kurds