As I recall, last time right-wing ‘pranksters’ tried to rally in Boston, they got their — banners — handed to them. Not surprised this batch went for a flash-mob in’n’out this time around, hiding their faces because they know how unpopular they are. (Yes, even in a town with a storied history of racism — this is not your parents’ Boston any more!) 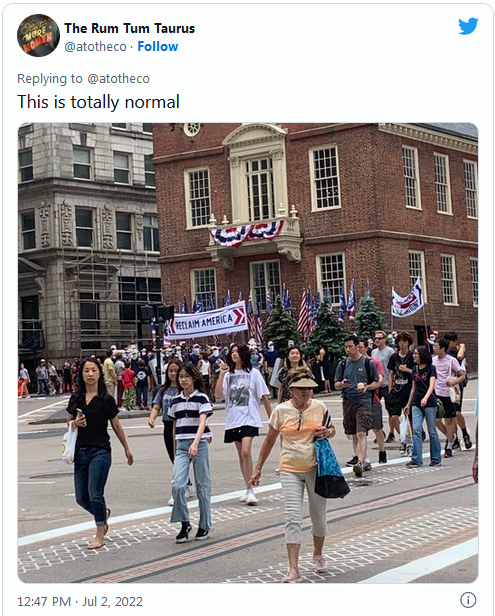 To be fair, it’s a holiday weekend in an area (Fanueil Hall / Quincy Marketplace) where both ‘serious’ tourism marketers and casual buskers are always doing Colonial cosplay. I’m guessing at least half the passers-by, local or tourist, never noticed these dudes were anything more than another VFW/Scout troop playing Independence Day dress-up.


The tabloid Boston Herald is far from progressive, and yet:

A group of about 100 marchers identifying themselves by flyers as belonging to the white nationalist group the Patriot Front, cut through the heart of downtown Saturday sparking a confrontation.

A scanner call came in at around 12:30 p.m. announcing that a group had gone up to a rental truck parked in the area of the Haymarket MBTA station and off-loaded a number of shields and flags. Many were U.S. flags, with at least one flown upside-down and many showing just the 13 stars in a circle for the original U.S. colonies, as well as flags featuring different designs…

The Boston Police Department received a report of one adult Black man injured in a confrontation with Patriot Front members at the corner of Dartmouth and Stuart streets at about 1:25 p.m.

The man told police that he took out his phone while walking down Dartmouth Street and found himself being pushed around by members of the group, according to BPD chief spokesman Sgt. Detective John Boyle. The man stated he was eventually knocked to the ground and assaulted, during which he suffered a laceration to his right ring finger and others to his head and eyebrow. He was taken to Tufts Medical Center. No arrests have been made yet as police are actively conducting a civil rights investigation of the incident…

As of 1:14 p.m., the group had marched down Commonwealth Avenue and turned toward Dartmouth Street toward Boylston before stopping in the area of the Boston Public Library, according to a Herald photographer on the ground.

It was at the library where flyers were found announcing the group — or at least part of the group — as belonging to the Patriot Front, a group described as a white nationalist or white supremacist organization by the Anti-Defamation League and the Southern Poverty Law Center.

The Patriot Front group also stood outside the Old State House building, which is run by the group Revolutionary Spaces. The group condemned the group in a statement Saturday night.

“No place was more central to the birth of our most fundamental democratic ideals than the Old State House,” wrote Nathaniel Sheidley, Revolutionary Spaces president and CEO, in the statement. “The presence in its shadow of those who would reject these ideals is an important reminder that democracy is fragile and the work of building a society rooted in liberty and justice for all is not finished.”

Afterwards, per the Boston Globe:

… The group later boarded an Orange Line train, getting off at Oak Grove Station in Malden. A State Police spokesman said troopers monitored the protest “like we do any other large demonstration” and he wasn’t aware of any arrests. A MBTA spokesman said there were no reports of the group disrupting T service.

The approximately 100 participants exited Oak Grove station at about 3:30 p.m. and headed for vehicles parked along Banks Place. The vehicles had licenses plates from Massachusetts and other states. including some from Texas.

Between November 2017 and December, the ADL documented more than 600 incidents in Massachusetts involving Patriot Front. The incidents included the distribution of Patriot Front propaganda and acts of vandalism, ADL records show.

In the ADL’s latest report about the distribution of white supremacist propaganda, the organization said last year Patriot Front was responsible for more than 82 percent of incidents nationwide. Its propaganda efforts were most active, the ADL said, in Massachusetts, Pennsylvania, Virginia, Texas, and Maryland.

Oak Grove is the northern end of the line, out in the relatively car-friendly ‘suburban’ ring around Boston proper. (Local snark: Can’t blame the Boyz for vanpooling into the city, both driving & parking are horrendous in downtown.)

One indication of how much Boston has changed: When Mayor Marty Walsh moved to Biden’s cabinet, he was replaced by a Taiwanese-American ‘out of towner’ woman: 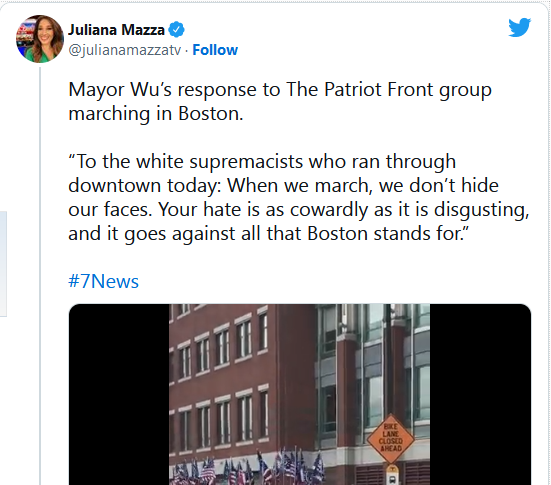 We are all THIS guy pic.twitter.com/Isv937eyAa