You are here: Home / Anderson On Health Insurance / Delaware: Healthcare.gov and Single Insurers and premium spreads

Delaware is a small state.  It uses Healthcare.gov for their ACA marketplace.  Early on, it had some limited competition as Highmark (a Blue), Aetna and Coventry all sold plans on-exchange in 2014  through 2017.  In 2018, only Highmark remained in the market.  This was stable for 2019, 2020, 2021, 2022.  Yet, Highmark did not leverage their ability to set silver plan premiums to maximize the number of people who would be exposed to a zero premium plan.  There was a slight change  in silver spread but not much.

The silver spread is important because the ACA sets the premium subsidy as a function of the benchmark premium which is the 2nd cheapest silver plan.  The subsidy is a gap filler between what a family is expected to pay as a function of their income and the benchmark premium.  If a family chooses a plan that is cheaper than the benchmark, then the size of the monthly payment that they have to make decreases by the amount of the gap between the chosen plan and the benchmark plan.  If the gap is big enough, the family can pay nothing.  Nothing matters a lot for enrollment and retention.

Highmark did not take advantage of this opportunity. This has puzzled me.  I had a draft paper that went out for review where I used  the Highmark in Delaware and a few other use cases to argue that sometimes insurers aren’t profit, revenue or enrollment maximizing. Non-maximizing behavior is WEIRD.  That paper got rejected.  It is currently sitting on my hard drive for the next time I have spare time to address the useful criticism. 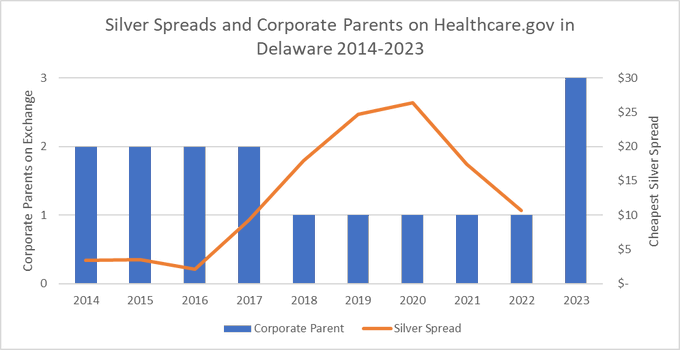 I also had been waiting for insurers to return to Delaware as the market is stable and should be profitable.  Insurers had returned to plenty of other markets over the past few years.

And now insurers have returned to the state.

.@bjdickmayhew needs to post a tweet rhetorically asking "Is the Senate ever going to get around to making ARP subsidies permanent?"

Two new insurers have filed to enter the state as on-Exchange, subsidy eligible insurers for 2023.

Usually when new insurers enter a market, the premium spread between the benchmark and the cheapest plan gets compressed and low income enrollees who are pretty healthy end up paying more in net premiums. This happens because insurers typically try to compete on price and an incumbent single monopolistic insurer usually should manipulate their pricing to create a huge silver spread to increase on-exchange, subsidized enrollee affordability. That huge spread creates an opportunity that other insurers can undercut. But Highmark never did that, so I think in the case of Delaware almost no one will be worse off and the increase in competition in a price linked subsidy market will lead to some people being better off. This is an unusual scenario in the ACA’s price linked market, but it is not unusual in most other markets.

Previous Post: « Important (Horrifying) Jan. 6 Read: ‘I Was Betrayed by President Trump’
Next Post: Great Find: CNET Has a Great Recap of All 6 Hearings So Far »