In mid-July I started a through-hike of Roper’s Sierra High Route in California’s Sierra Nevada. It ended not being the projected through-hike because of the three fires in the Yosemite area which were only partially contained when I bailed and on occasion filled the air with smoke and the stench of burn. I did not feel the need to go out of my way to coat the inside of my lungs with soot particles. The Sierra will still be there next year and, having had such a great time this year, I will be most happy to return to complete the Northern third of the route.

The Sierra High Route is a 180 mile route from Kings Canyon NP on the West side of the Sierra to Twin Lakes near Bridgeport on the East side. In a way it parallels the more well-known John Muir Trail, the main difference being that the JMT goes through the valleys and is a bona fide maintained trail while the High Route, as the name implies, stays as high as possible, rarely dipping below 10k ft, and is mostly off-trail. Both routes share short stretches of trail near Mather Pass, near Mammoth Lakes and near Tuolumne Meadows.

Most passes one crosses on the High Route are in the 11.5 k to 12.5 k ft range. Most have a reasonable side and a steep side, some have a heart-stopper side that takes a significant amount of the courage you can muster. This can be due to grade, i.e. steepness, or the kind of ground you have to walk on, which can be loose sand mixed in with loose rocks of fist size and below, aka “scree”, scree only or “talus”, rocks between briefcase and washer/drier to small car size, and combinations of the three.

I am in my late sixties and I can no longer schlepp the heavy packs I used to carry without complaint in my youth and early adulthood into middle age (I did not know any better and the modern ultralight gear had not yet been invented nor was it on the horizon). So my equipment is stripped down to the bare bones plus food and water. I therefore only carry an iPhone as my camera and not any more fancy equipment. I can therefore not compete with the production values of Bill in Glendale or other photographers’ on BJ, my apologies.

It was my first time in the Sierra Nevada. If my luck holds up (and the knees, don’t forget the knees!) I will be back next year to complete the route and the Southern Sierra High Route, which is a bit more difficult but, I now know, within my reach. 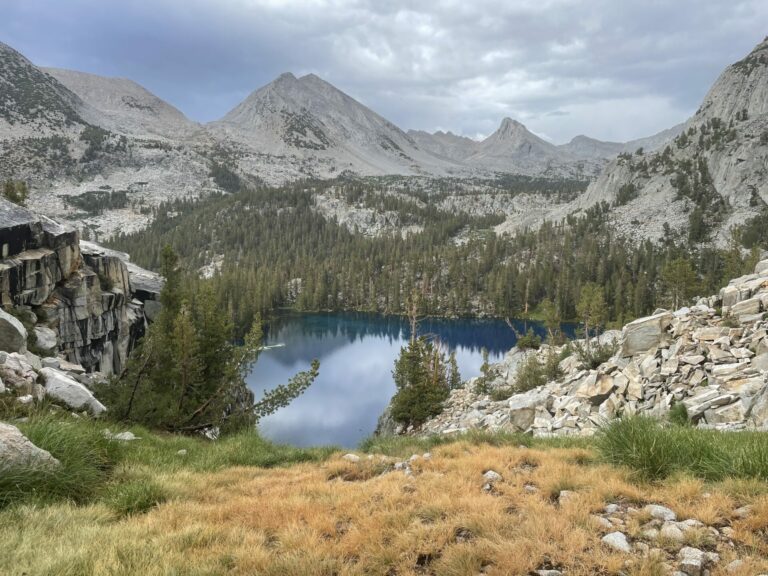 Marion Lake, named for Marion LeConte who, with her husband Joseph LeConte, was one of the early explorers of the Sierra Nevada in the late 19th and early 20th century. The lake has a reputation for its unreal blue color and even on this overcast late afternoon the color did not disappoint. 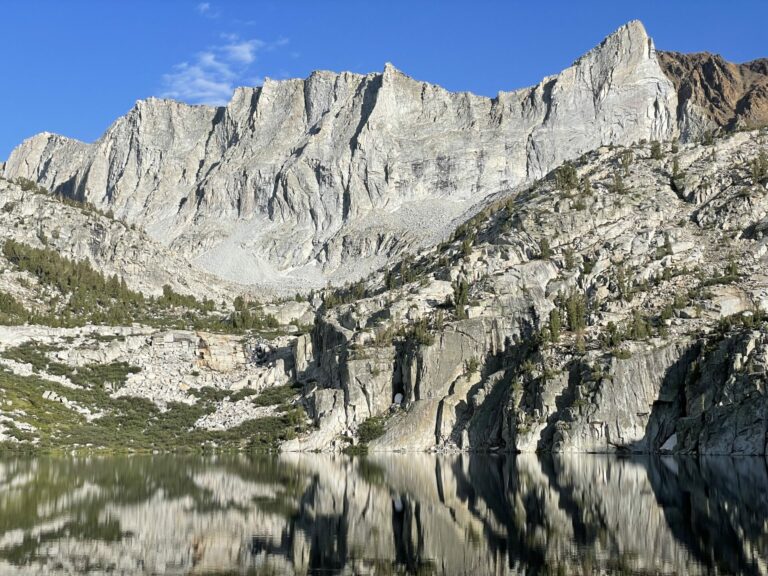 View of the South shore of Marion Lake from the outlet stream. Notice the sharp boundary between the white granite and the reddish, iron-containing rock on the horizon. 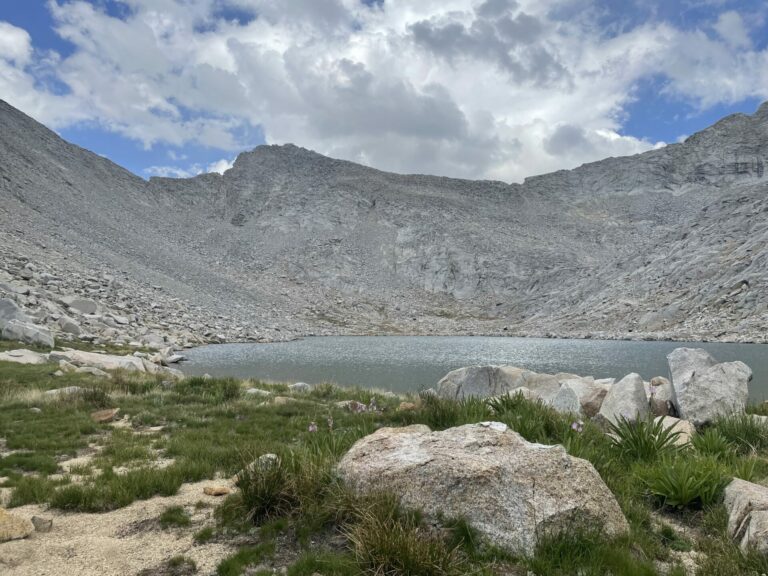 This is the South side of Frozen Lake Pass, the “easy” side no less. the pass itself is the little notch on the left that looks like an L tilted to the left. It is “pick your own adventure”-type ascent. As you find your way up you think “this is the easy side, remember!” 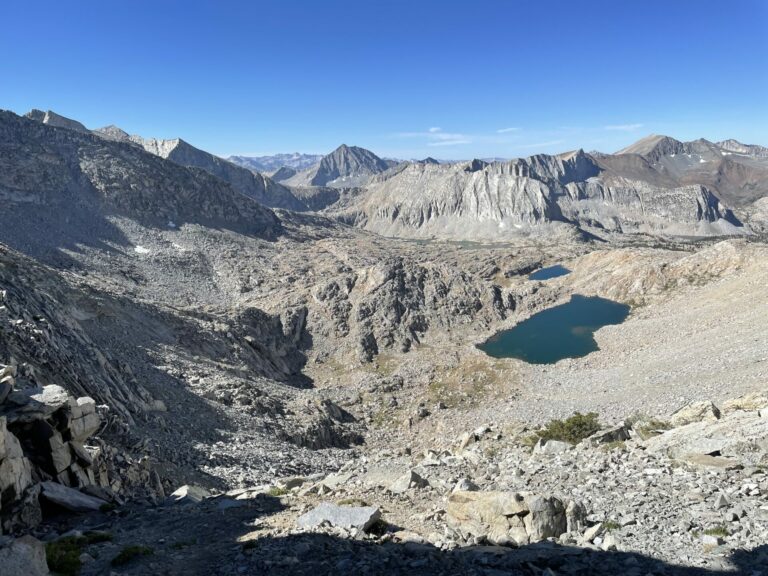 A last look back from the pass at 11600 ft to where one comes from, Sequoia and Kings Canyon National Parks are somewhere out there. 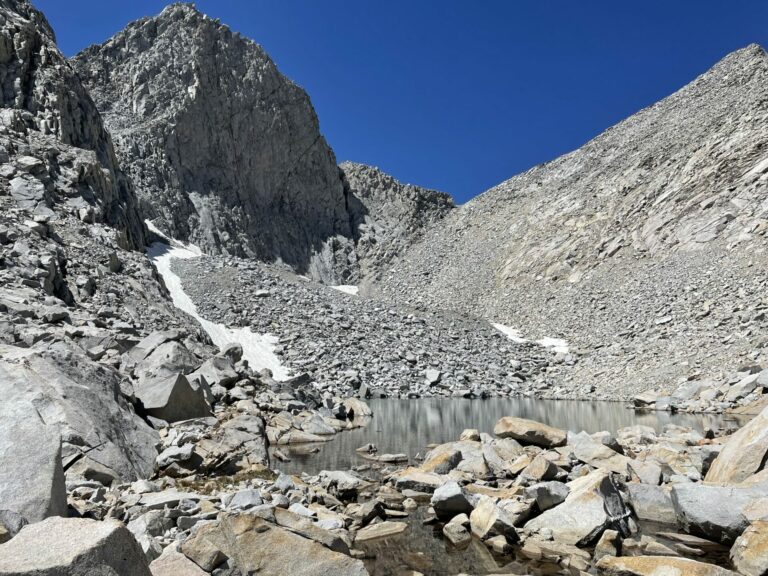 North side of Frozen Lake Pass

The descent lived up to its reputation. The pass is the lowest notch slightly off-center to the right. I did not dare stop and take pictures while climbing down. Here the slope flattens out at the shore of Frozen Lake. You continue to scramble across the jumble of rocks to another precipice located at my back as I took this picture. 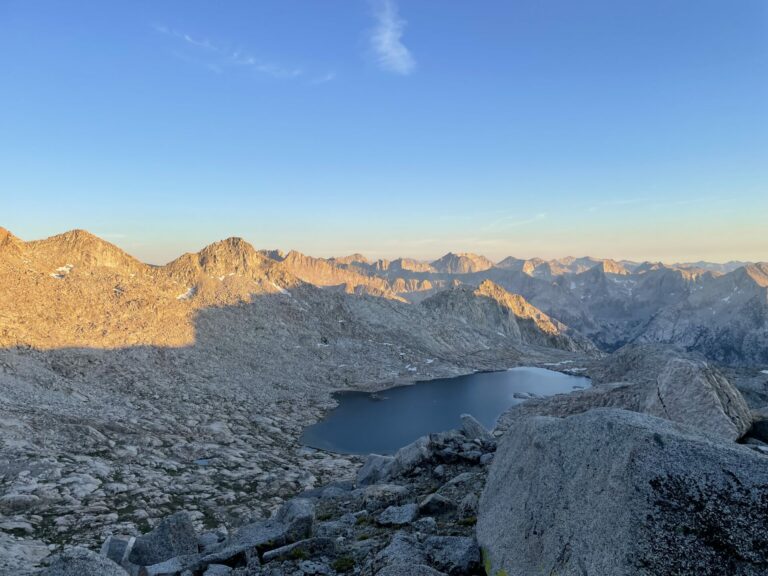 A look back at nightfall from a pass below Mt. Jepson. California, the Golden State, lives up to its reputation (even though this nickname does not originate from alpenglow like this). 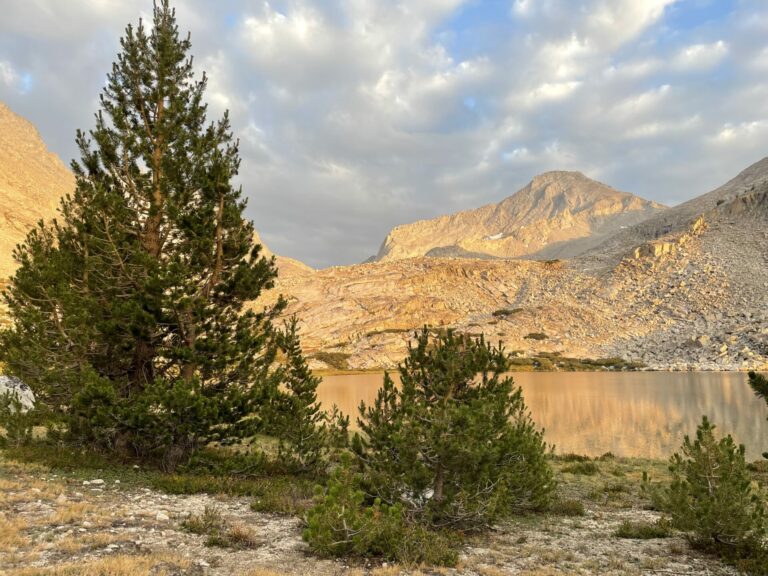 Evening light at my camp on the shore of Lower Mills Lake. It had been a long, difficult, and exhausting day, but views like this make the day’s challenges disappear instantly. 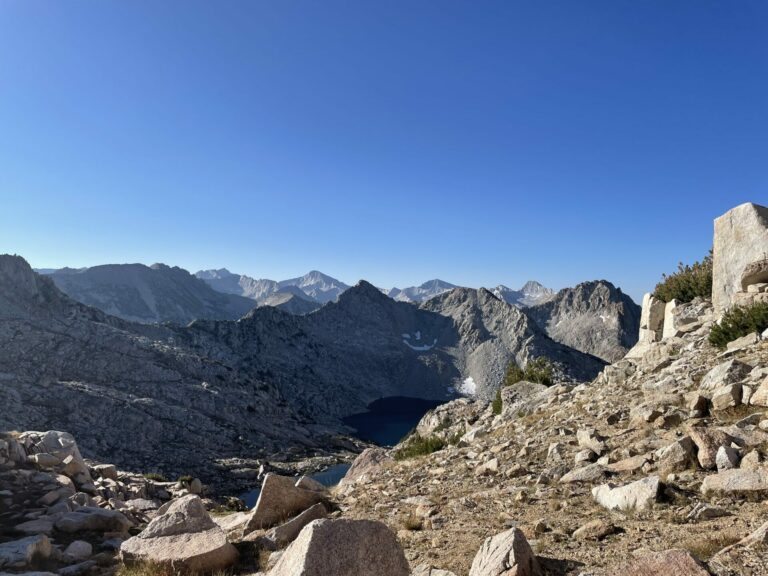 Every day, with one or two exceptions, would start like this, with a perfectly blue sky. By about 11 to noon the clouds would move in for a partly cloudy afternoon and in the early evening the skies would clear up. the night sky was just fantastic, the Milky Way as distinct as a car’s headlight in the night. While I did put up my tent, i mostly cowboy camped under the stars. 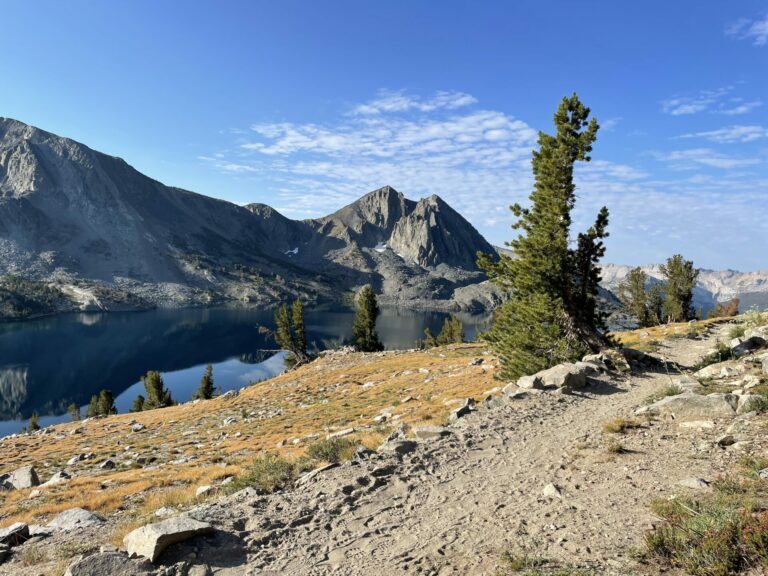 As you near Mammoth Lakes the Sierra High Route joins the John Muir Trail and the Pacific Crest Trail for a couple of miles. This is the end of splendid isolation and solitude, but this early morning above Duck Lake as I ascended to Duck Pass was perfect nonetheless. 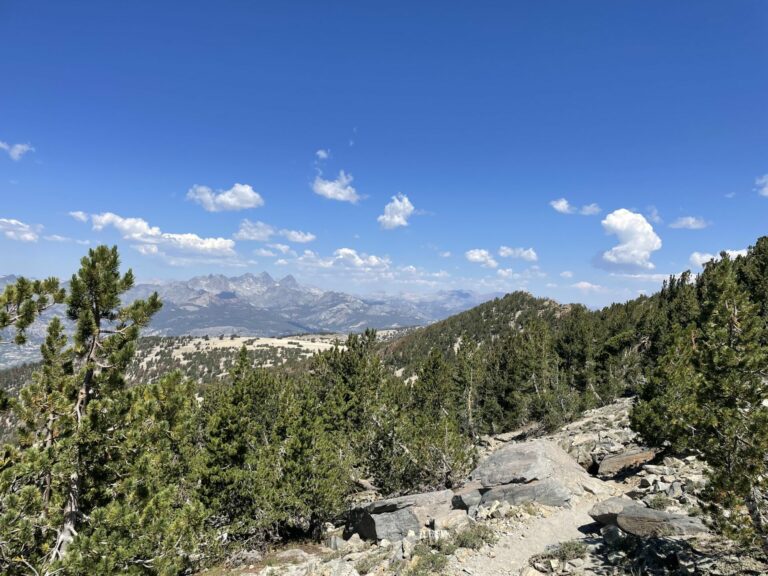 In the  far distance you see the Ritter range, which I would be hiking though a week hence. Because of the fires I chose to not go there this year, hoping to have better luck next year.

Previous Post: « The Water Wars of the Future are Here Now
Next Post: Thursday Morning Open Thread: Every Day, Another Step Forward »