Steve Bannon is expected to surrender to prosecutors in New York on Thursday, sources familiar with the matter confirm to @ABC News. https://t.co/vL8ehPNpC2

Bannon's expected indictment for allegedly scamming money for Trump's wall shows yet again that right wing politics has long been a cesspool of grift.

“What Bannon is doing here is of a piece with 50 years of grifting,” historian Rick Perlstein tells me.https://t.co/uNNoz8ZuKH

Political commentators often ask whether the ideology of Trumpism will outlast Donald Trump. We don’t yet know the answer to that, but we already can say this: If there’s one legacy of Trumpism that will endure long after Trump himself, it’s Trumpist grift…

You might recall that Trump pardoned Bannon for the federal charges. But presidential pardons don’t apply to state prosecutions, and the Manhattan district attorney has been evaluating whether to prosecute Bannon since last year.

Which is a reminder of the role that sheer, unabashed, unadulterated grift continues to play in the Trumpist political project. In numerous ways, Trump’s allies have shamelessly milked the Trumpist cash cow for all it’s worth, something that has continued during his post-presidency.

The outsize role of grift in American conservatism is a story that goes back at least a half century. But Trump glommed on to those tendencies while also exacerbating them in his own ugly ways, and the Bannon saga is a particularly grotesque example of that.

Bannon and a group of associates allegedly raised $25 million from hundreds of thousands of donors for something called “We Build the Wall.” In 2020, federal prosecutors charged that Bannon had lied when he said he wouldn’t take any compensation, instead raking in $1 million for himself and a co-conspirator through a nonprofit group…

The promise of the wall was itself largely grift. The role of a wall in keeping out migrants is negligible: Many migrants that Trump targeted had the legal right to apply for asylum and get a hearing in the United States, which wouldn’t be undone by any wall. Trump slashed migrant flows by restricting that legal right, even as his wall mostly wasn’t built. That latter failure was largely irrelevant.

Yet Bannon’s scheme sold the unbuilt wall as some sort of major and unforgivable betrayal of Trumpism. Millions who had been seduced into believing our civilizational fate turned on the building of this wall were invited to open their wallets to remedy this historical injustice…

Historian Rick Perlstein has documented how such grifting has long been a feature of right-wing politics, back through the direct mail chicanery of the 1970s.

“What Bannon is doing here is very much of a piece with 50 years of grifting,” Perlstein told me. “The pattern has always been corralling fleeceable marks and separating them from their cash.”

Perlstein noted that these schemes are built atop a bedrock layer of grift. Underlying promises such as the vow to reverse the “stolen” election, or to finish the unbuilt wall, tap into people’s anger and disappointment by telling them they’ve been deprived of something they should have justly received (a Trump election victory, a border wall).

As Perlstein put it, the key is to “manufacture this feeling of helplessness, so you can ride to the rescue.” In other words, it’s grift all the way down…

After my second report on WeBuildTheWall, this is what its founder/convicted scammer Brian Kolfage tweeted.

Now, Steve Bannon is getting indicted for the second time for the scam for which he pled guilty in April, forfeiting $17 million, none of which is being used on a wall. pic.twitter.com/66RlZyU0n9

The IRS has stripped tax-exempt status from the dark money outfit at the center of an alleged scheme by Steve Bannon to funnel hundreds of thousands of dollars from a charity into his and his allies’ pockets. https://t.co/fhh7z41qwI

In his final hours in office, Trump pardoned Bannon on federal fraud charges (but not the other defendants). And now, Bannon faces a state level charge on the same issue in New York https://t.co/MKpAHIebNa

Conservatism is a Russian nesting doll of affinity fraudshttps://t.co/1bLJ12ARTP

Someone on here said Steve Bannon always looks like his daughter just told him she wants her step dad to walk her down the aisle and I think about it every time I see him.

One can but hope, she said… 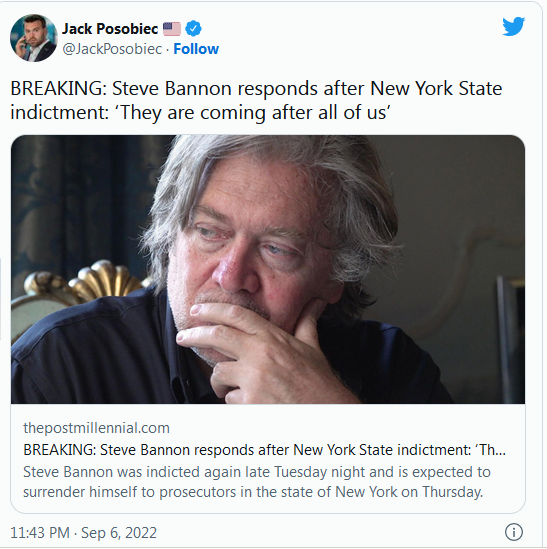