Every Trump supporter is like "welllll we're about *this close* to civil war! It's a good thing, we're ready to start murdering!" and every news outlet is like "ooooh, Joe Biden better not force the right to start murdering" and honestly……. we don't have to put up with this https://t.co/KwNzFm92vW

Over the next few days, you will notice high-profile conservatives publicly distancing themselves from Trump, people you wouldn't expect. It has already begun, but it will become glaringly obvious by the end of the week. Everyone is hearing the same rumors; Trump is done. 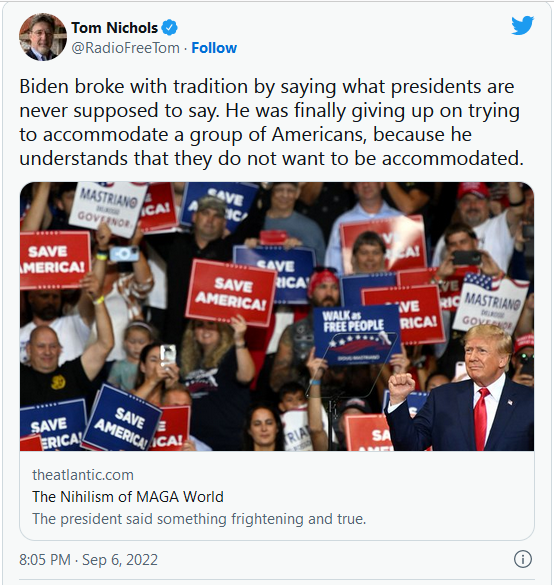 … I know that some of my friends and colleagues believe that Biden, as president, must continue to reach out to MAGA voters because they are our neighbors and our fellow citizens. (The former GOP operative and my fellow Never Trumper Tim Miller made this point just this morning.) My instinct is to agree with them. But how do we reach those voters? These citizens do not want a discussion or a compromise. They don’t even want to “win,” in any traditional political sense of that word. They want to vent anger over their lives—their personal problems, their haunted sense of inferiority, and their fears about social status—on other Americans, as vehemently as possible, even to the point of violence.

How do any of us, and especially the president, engage with such a movement, when every discussion includes the belief that the only legitimate outcomes are ones in which the MAGA choice wins? Such an insistence is not civic or democratic in any way, and it is not amenable to resolution through the democratic process…

As a native son of the Commonwealth, I have no concerns that the Bay State is going to elect someone on Donald Trump’s say-so. But Trump’s authoritarian blather makes Biden’s point. The MAGA movement isn’t interested in politics, or policies, or compromises. It is interested in destruction and seeing others made as miserable as its followers are. MAGA is a movement of people who seem to be, in so many ways, deeply and profoundly unhappy, and suffering from an emptiness and anger deep in their spirit. There is no political solution for that. All Joe Biden did was finally say this obvious truth out loud.

Five days of every Republican performing outrage about Biden calling MAGA semi-fascist and Trump straight up posts a meme of himself as Big Brother. Amazing, no notes. pic.twitter.com/6bpGp4ENBD

The funniest part of people finding and reposting this is that at the time it got basically zero coverage because it was completely par for the course for Trump. https://t.co/w7iZReXFbe


This is a pretty good roundup:

President Joe Biden delivered an important speech in Philadelphia on Thursday night about the threat that Donald Trump and his followers pose to the future of American democracy. It was fiery and blunt by Biden standards. And there’s probably no better proof that Biden’s speech was desperately needed than the reaction it received online. Trump’s army of whiners and assholes absolutely lost their shit…

Georgia radio host Erick Erickson, who has previously tweeted approvingly of dictator Augusto Pinochet’s use of helicopters to kill dissidents and who once shot bullet holes through a New York Times article he didn’t like, sent dozens of tweets and retweets Thursday night, absolutely disgusted that President Biden could be so mean to Trump supporters…

But whatever the reaction in the polls, the backlash we’re seeing online proves that Biden hit a nerve. Trump’s worldview may be hard to pin down into a coherent ideology, but it’s ugly and dangerous, whatever you want to call it. And Trump supporters know, given how unpopular Trumpism is, that they need to mask the anti-democratic nature of the Trump movement—at least until Trump is able to take power again.

Click through to see some of the responses to Biden’s speech on Thursday, along with some helpful context. These people won’t be undone by their hypocrisy, but it’s still important to call it out, just as a reminder that Trumpism’s pearl clutching is always done in bad faith by people who fundamentally reject the notion of democracy.

We have to heal the Nation by giving the Qanon shaman the Presidential Medal of Freedom https://t.co/61Jpy7hQkY

We're explaining that violent insurrection will be met with force to preserve the constitution. This is easy enough even for pundits to understand. https://t.co/XuANPWSzeh

Oh, I'm sorry. Perhaps he should have tear gassed a crowd so he could have a photo op in front of a church.

Yes, flabby old right-wingers feel comfortable holding forth to random service workers about how a "civil war" is coming, because our media has characterized this as a legitimate political position. What my twitter account supposes is, what if it wasnt

What if it was actually regarded as legitimate fighting words. What if you want to the fancy cocktail bar talking about civil war and all the bartenders just beat your ass in public because you're full of shit about how dark brandon gives you no choice but to rebel against the US

War for Ukraine Day 196: Lot of Stuff Going On
Next Post: On The Road – lashonharangue – Galapagos – Part 3