You are here: Home / Foreign Affairs / War for Ukraine Day 212: The ICRC Hasn’t Exactly Covered Itself in Glory Either! 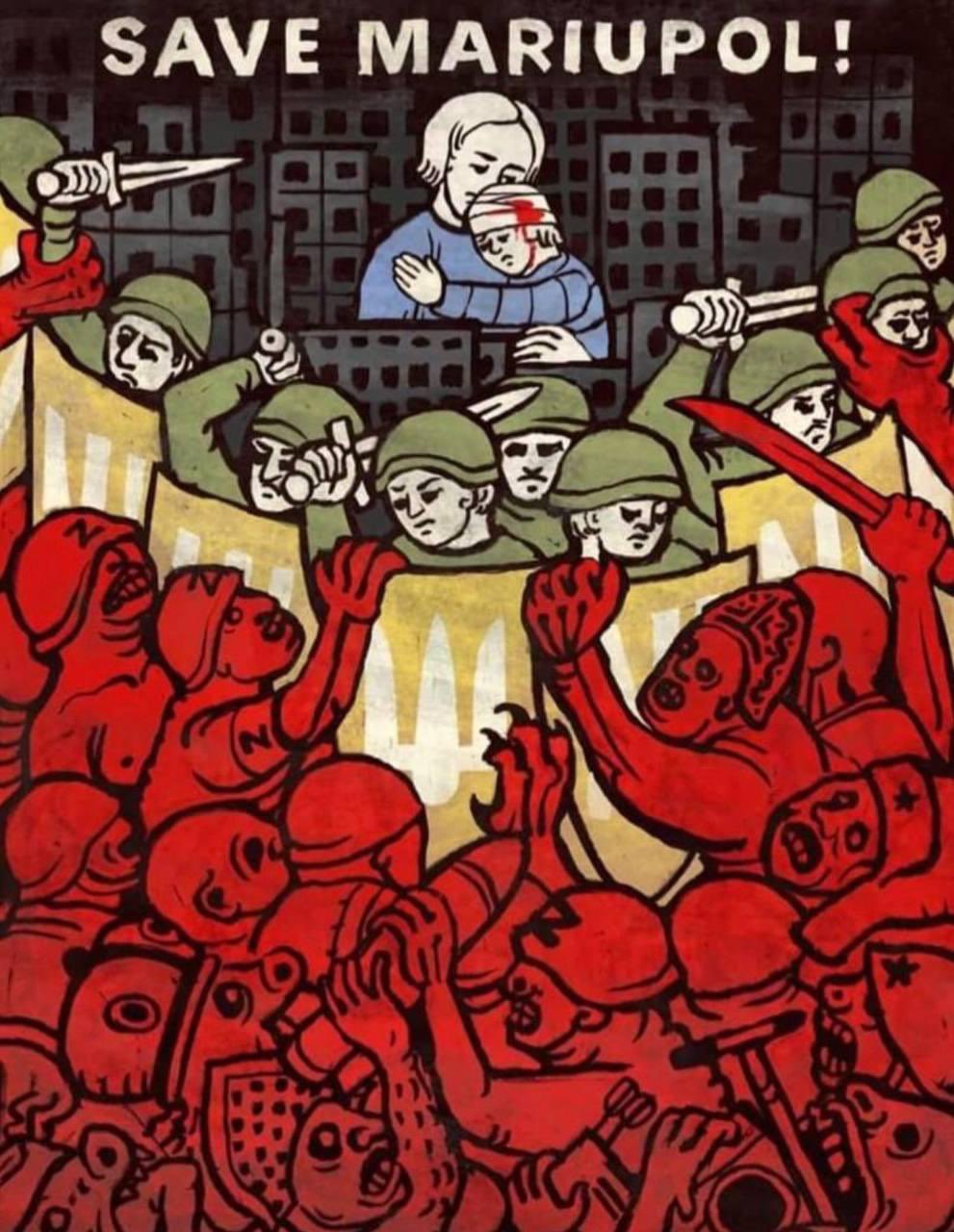 While Amnesty has done the least it could do after issuing its egregious report a couple of months back, the ICRC hasn’t covered itself in glory either. At the beginning of Russia’s re-invasion I covered how the ICRC had left its local team in Mariupol to the tender mercy of the Russians. They have also, as many of us suspected, completely failed in their job of protecting the Azovstal defenders while POWs in Russian custody.

This is the Head of the Mariupol Patrol Police Mykhailo Vershinin. Before and after Russian captivity.

All our freed Defenders say they didn't see anyone from @ICRC – International Red Cross.

What does @amnesty think about these photos?

Mykhailo Dianov before and after Russian captivity.

All our freed Defenders say they didn't see anyone from @ICRC – International Red Cross.

What does @amnesty think about these photos?

Let’s take a quick check in on events in Iran.

Iran, Shiraz, Saturday.
Women are leading this uprising against repression. Forced hijab is the symbol. Removing it is the sign of resistance. pic.twitter.com/DVzMk1D3zv

They have lost fear of the regime. pic.twitter.com/U3pjNw8bTN

Today, I signed the decree awarding the title of Hero of Ukraine to Serhiy Sova. A fighter of the glorious 93rd mechanized brigade “Kholodnyi Yar”. He has defended our state – Ukraine since the beginning of the war in 2014, fought for Pisky, for the Donetsk airport. After February 24, he fought in the Kharkiv region.

Serhiy Sova gave his life for Ukraine. We’ve all seen the photo of his hand with blue and yellow bracelets on his wrist. He has worn them as a talisman since 2014. And this photo was one of the first from Izyum, from the mass burial site in the forest that was discovered when the occupiers fled. He was a true warrior and a father that one can be proud of. Eternal memory and honor to the hero!

Eternal glory to all our warriors who gave their lives in battles for our state!

Today I awarded the honorary award “For Courage and Bravery” to three of our brigades. The 1st separate tank Siversk brigade, the 40th separate artillery brigade, the 57th separate motorized infantry brigade.

Since the beginning of the full-scale invasion of Russia, the fighters of the 1st separate tank brigade have performed their tasks with dignity and courage. First in the Chernihiv region, and now in the hottest spots of the south and east of our country. In six months, more than a thousand warriors of this brigade were awarded state awards.

Units of the 40th separate artillery brigade defend the state in the Kharkiv direction and do it very bravely and effectively. The proven losses of the Russian army from the fire of this brigade of ours make it clear to all the occupiers that there will be no place for the enemy on our land.

This month, the 57th separate motorized infantry brigade achieved good results in the south of our country, liberating a number of settlements in the Kherson region. During the period of the full-scale invasion of Russia, three warriors in the 57th brigade were already awarded the “Gold Star” Order and 275 servicemen received state awards.

The heroism and grit of our warriors, the striving for independence and justice, which united all our people, do not leave a single doubt that Ukraine will prevail and that all invaders on our territory will definitely be defeated. Unless they run away. Indeed, it is true.

Once again I want to say to Russians in Russian.

Russian commanders do not care about the lives of Russians – they just need to replenish the empty spaces left by the dead, wounded, those who fled or the Russian soldiers that were captured.

Your government does not care who will take these places. Either young IT specialists who did not serve at all, or pensioners who served only in the Soviet army. So, the key moment has come for you: right now it is being decided whether your life will end or not.

It is better not to take a conscription letter than to die in a foreign land as a war criminal.

It is better to run away from criminal mobilization than to be crippled and then bear responsibility in the court for participating in the war of aggression.

It is better to surrender to Ukrainian captivity than to be killed by the strikes of our weapons, absolutely fair strikes, as Ukraine defends itself in this war. We defend the brightest – we defend our lives, our children, our freedom.

What is Russia fighting for? Every citizen of Russia knows – even if many do not admit it, they know for sure – that it is Russia that brings evil.

Ukraine guarantees every Russian soldier who surrenders three things. First, you will be treated in a civilized manner, in accordance with all conventions. Second, no one will know the circumstances of your surrender, no one in Russia will know that your surrender was voluntary. And third, if you are afraid to return to Russia and do not want an exchange, we will find a way to ensure this as well.

Ukraine will do everything for its victory. And every citizen of Russia should understand: no tricks will help the occupier. I promise you that.

We will retaliate against every strike of the aggressor – at Zaporizhzhia and Kharkiv, Mykolaiv, Nikopol, Donbas, at all our cities and regions… We will definitely liberate our entire country – from Kherson to the Luhansk region, from Crimea, I emphasize that, to the Donetsk region.

We will not allow the occupier to go unpunished. Every murderer and torturer will be brought to justice for what he did against us, Ukrainians.

Eternal memory to all those who gave their lives for our homeland – for Ukraine!

Senior Soldier of the 93rd Mechanized Brigade Serhiy Sova was posthumously awarded the title Hero of Ukraine by @ZelenskyyUa
The photo of his mutilated hand with a 🇺🇦 bracelet found at the mass burial site in Izyum became a tragic symbol of russian atrocities in Kharkiv region. pic.twitter.com/IRXBGWIbxt 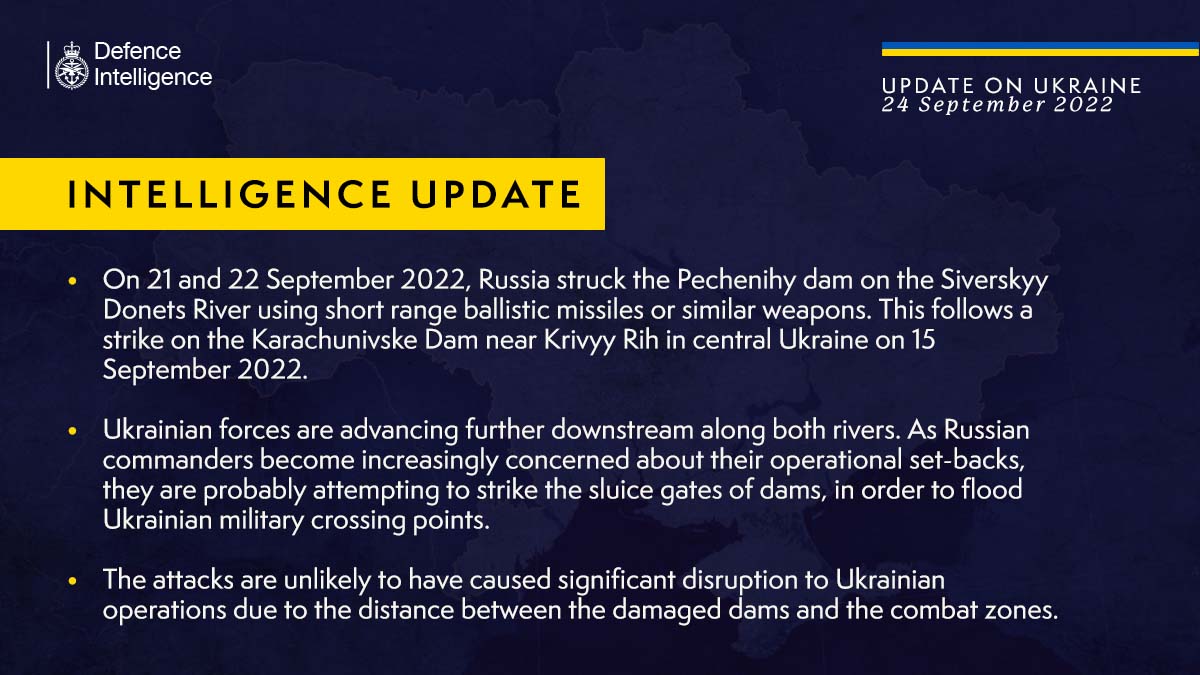 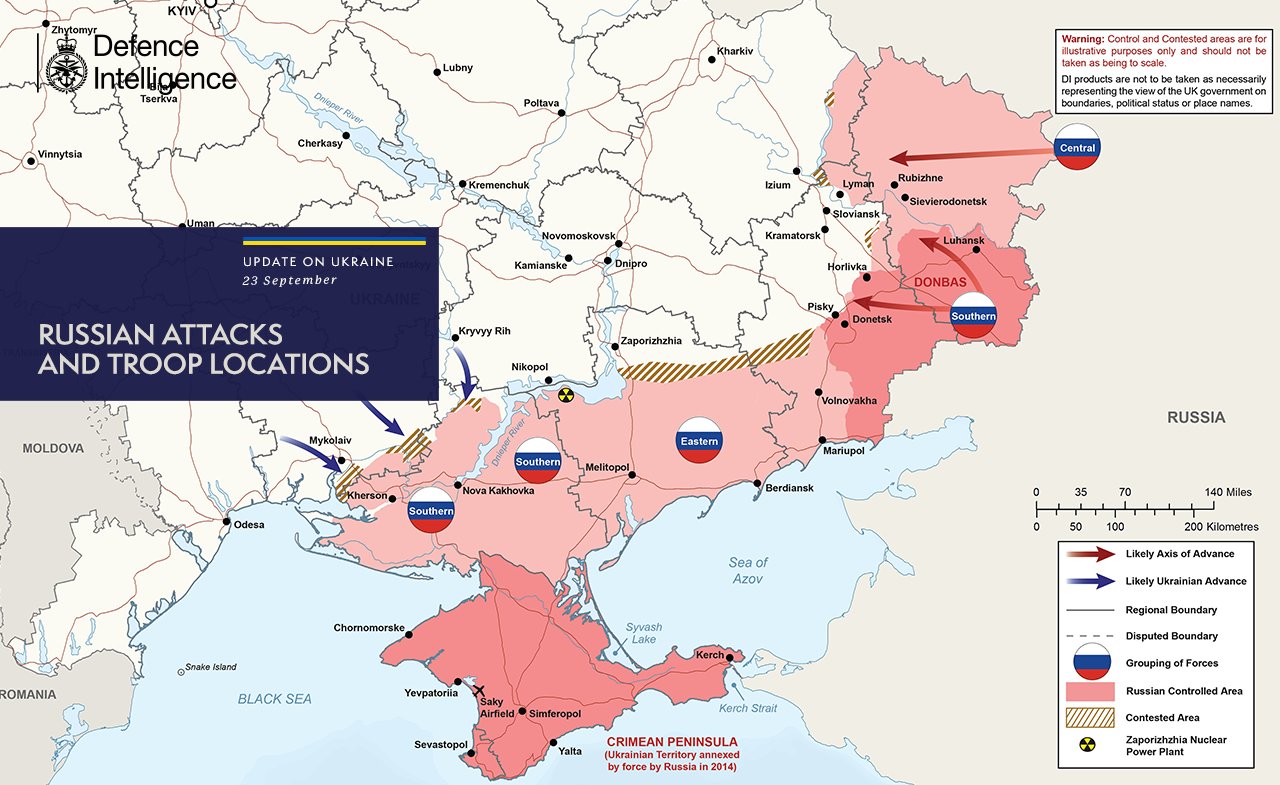 Here is former NAVDEVGRU Squadron Leader Chuck Pfarrer’s most recent update regarding the situation in Izium:

This is what the Russians are saying about what the Ukrainian military is doing:

It is going 'somewhat' unnoticed by the AFU are still very much pushing to encircle Lyman. Rybar just reported a few important settlements were captured and if Svatove is liberated, the Russian Lyman group will be encircled. pic.twitter.com/1Az2dIEjMi

If you click on the link there’s a second tweet with a correct screengrab of the original Russian.

Here’s the English translation as a screengrab: 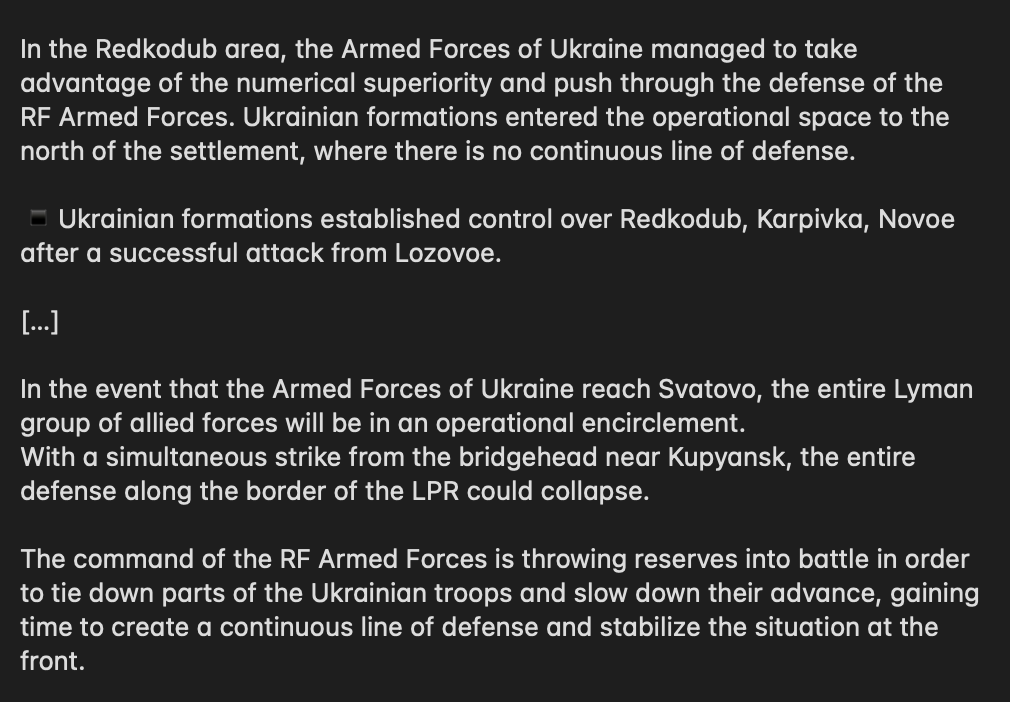 I would not want to be holed up in Isengard…

“The Ents are going to war” pic.twitter.com/QUNzKeDsFc

This is incredible.
Within just 24 hours, Mykhailo Danilov’s family received over UAH 5 million in donations from across the world.
The goal was to fundraise UAH 500,000 and heal the Azovstal marine’s arm. His family is extremely thankful, and it has stopped the campaign. pic.twitter.com/O1Wic1Dopw

The garrison of Mariupol had orders to hold the city as long as possible ✅
Then, they were ordered to save their lives✅
215 soldiers are free✅
Their new task:to undergo rehabilitation&tell their story to the world✊
Success of 🇺🇦 negotiators🔥
Thanks to @ZelenskyyUa @RTErdogan pic.twitter.com/75564cuzbI

The rusty AKs are not only par for the course, but actually in better shape than a lot of the equipment and material that the Kremlin is providing the troops:

The rusty AK's were not the worst, according to an "LPR" guy…https://t.co/1e0yTXZT2S pic.twitter.com/HWncPERWXY

And here’s the English translation as a screengrab: 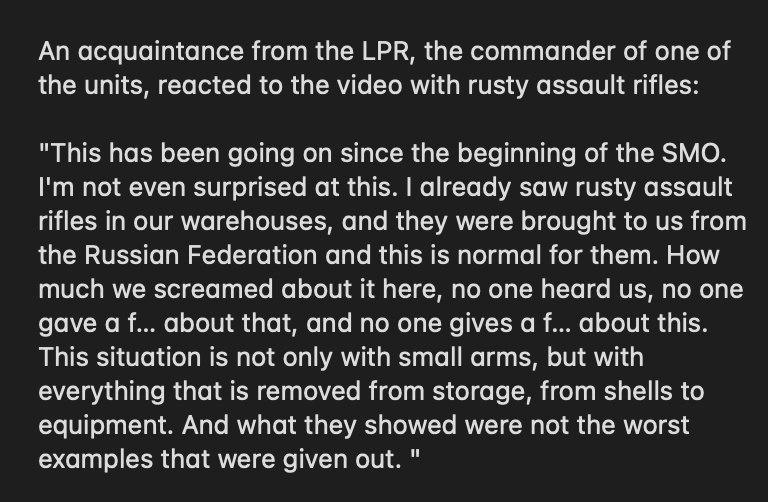 I’m not going to post them, but I’ve now watched about a dozen different videos/video clips of recently mobilized/conscripted Russians at the in-processing centers or at the training sites they’re being sent to. Leaving aside the ones where everyone is falling down drunk, a lot of these videos look like they were filmed in homeless shelters. And that’s probably an insult to homeless shelters.

This mobilization is going to be a mess and it is not going to work. Whether it creates the conditions to weaken Putin in any significant way is an open question.

For you logistics enthusiasts:

We continue to rely on russia for the provision of weapons while we await those that will be provided as part of the Lend-Lease program. pic.twitter.com/wjZR6tfxBu

This is how POWs are supposed to be treated. Also, another data point in the mountain of data that the Russian military is poorly trained, poorly led, and poorly equipped.

This Russian soldier enlisted to earn some money. After five minutes of fighting he was the only survivor of his tank crew.

He tells about complete lack of training and equipment for new soldiers (and that was before partial mobilization).