1: someone insulted him and he’s doing it to protect his damaged ego

2: he knows something catastrophically bad is about to hit the news and he wants to distract people and get ahead of the story

I do wonder if Elon Musk follows dead cat theory.

i.e. when your share price tanks, tweet something nuts so everybody writes about the dead cat you just threw in a room. pic.twitter.com/v6pr3TcKCP

Then Bloomberg — the *serious* finance magazine, we’re not talking Forbes here! — mocked his Twitter emails at length, giving the impression that some (not even white!) CEO drone might know more about the company than He Who Must Never Be Mocked…

2/ The whole article is really worth your time. But here's a key passage. Agrawal starts by saying hey you really looking forward to working together, let's talk abt how to make Twitter better. Musk tosses off some pet ideas and don't get the full fluff he's expecting. Then this. pic.twitter.com/w3DitzwmA4

4/ From the inside the whole thing was basically a dignity bloodbath. With @jack bleeding out super fast. And Agrawal seems to have been the only guy who survived, with a few nicks at most.

We also see from @jack's comments in those @elonmusk texts how pervasive the culture of bromerta is in the Valley. Somehow Agrawal didn't play ball but just acted like a normal grown up. And that triggered Musk's tantrum (i.e., purported attempt to buy Twitter.) 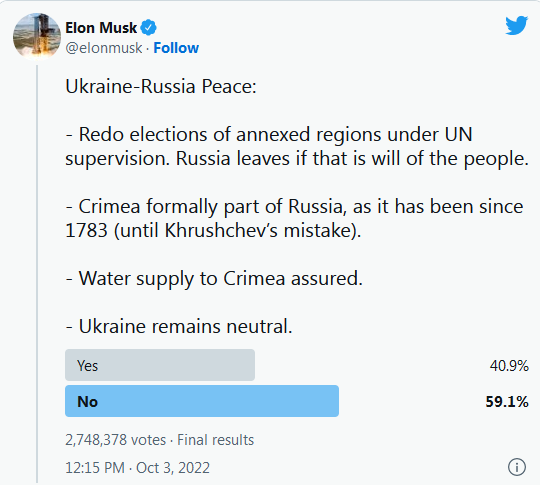 Elon, have you ever considered that maybe people just disagree with you and you've been living in a particularly well-sealed bubble of money-chasing Yes Men until very recently?

I’d still bet even odds against Musk actually buying Twitter (who knows if he can afford it, now), but it’s not a surprise that he has ‘allowed his lawyers to persuade him’ to drop his suit…

Inside Elon Musk’s savvy quest to turn a $40 billion company into 4chan.

(staring at the upper right corner of email the lawyers sent me saying I’m fucked and I have to buy this shit) I will create X https://t.co/ZCOYIW7edz

But will X also serve briefly as a boat?