Media outlets should pay more attention to the headlines and subheads published on social media and wording of news alerts published on phones since a lot of people see those and never read the full article. Here’s an example that’s rightly getting dragged on Twitter: 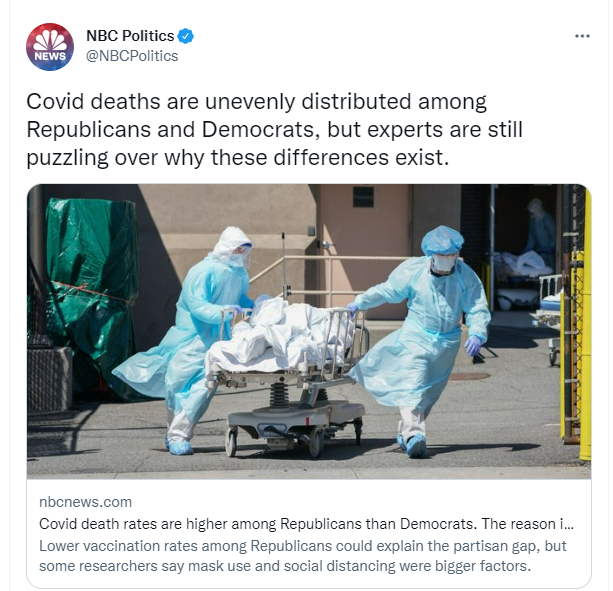 A real puzzler there since one party opted for science-denying demagoguery and the other followed the advice of highly trained infectious disease professionals who’ve served the U.S. government for decades under presidents from both parties. But if you click through and read the article, it has a better headline and subhead:

Lower vaccination rates among Republicans could explain the partisan gap, but some researchers say mask use and social distancing were bigger factors.

That’s what researchers are still trying to nail down: which factor was most responsible for more Republicans than Democrats dying — lower vaccine rates or masks/social distancing uptake? An excerpt:

Average excess death rates in Florida and Ohio were 76% higher among Republicans than Democrats between March 2020 and December 2021, according to a working paper released last month by the National Bureau of Economic Research. Excess deaths refers to deaths above what would be anticipated based on historical trends…

“In counties where a large share of the population is getting vaccinated, we see a much smaller gap between Republicans and Democrats,” said Jacob Wallace, an author of that study and an assistant professor of health policy at the Yale School of Public Health.

Indeed, his paper found that the partisan gap in the deaths widened between April and December 2021, after all adults became eligible for Covid vaccines. Excess death rates in Florida and Ohio were 153% higher among Republicans than Democrats during that time, the paper showed.

“We really don’t see a big divide until after vaccines became widely available in our two states,” Wallace said.

If Charlie Crist hammers the bolded stats nonstop over the final weeks of his race against DeSantis, will anyone hear him? The single debate DeSantis agreed to has been postponed so the governor can swan around the state in a campaign-branded vest and shrimper boots pretending to give a shit about hurricane recovery, so Crist will need to build his own soapbox.

Also, the NYT is already fangirling out over DeSantis’s wife in preparation for the governor’s 2024 coronation, so probably not. If polls are accurate, DeSantis didn’t kill off enough of his base through anti-vax and mask demagoguery to affect the 2022 election outcome, so we’re doomed. Probably. But maybe not! More postcards, etc. And please, media overlords — better fucking headlines!*

*It’s possible the shitty headlines are clickbait, but I think “Republican Demagoguery Kills Constituents” is pretty click-baity, so I don’t think that’s it. I think it’s more sloppiness than malice.