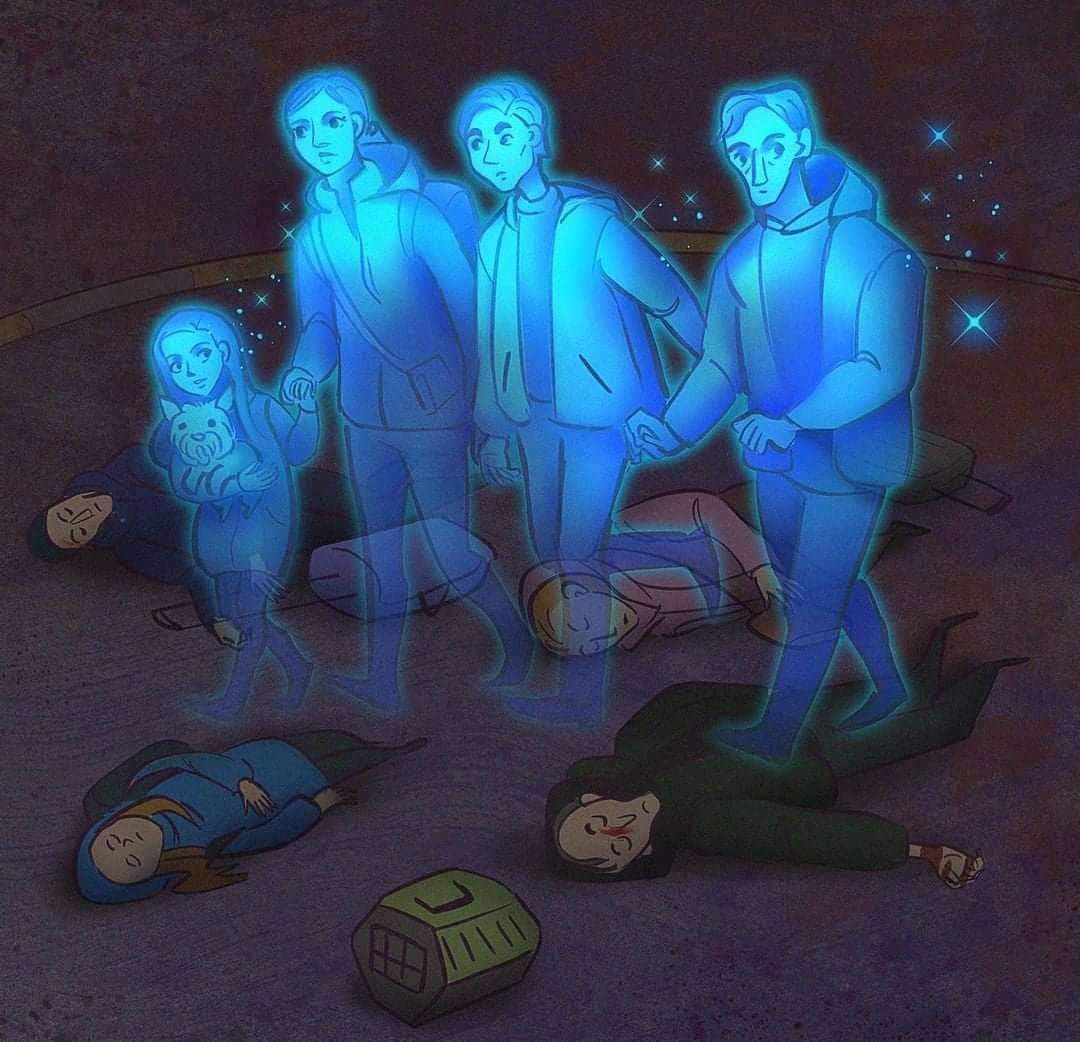 Quick housekeeping note: Somewhere over the past two weeks or so, I appear to have lost a day in the title. Apparently today is day 229 of Ukraine’s defense against the Russian re-invasion, not day 228. So I’ve jumped a day in the titles.

In response to the Ukrainians successfully targeting the Kerch Strait Bridge, Vladimir Putin and his senior military leadership threw a temper tantrum early this morning Ukraine time. We’ll get to that after President Zelenskyy’s address from earlier today, but I want to highlight something important. It got lost in the shuffle when I took Yom Kippur off, so I apologize for not noting and highlighting here that the new Russian theater commander – Sergei Surovikin – is a brutal, cruel, war criminal.  Euronews has the details (emphasis mine):

Sergey Surovikin, a general, previously led Russian forces in Syria. Here he was accused of using brutal and controversial military tactics, such as the indiscriminate bombing of anti-government strongholds.

Until now Surovikin led the “South” forces in Ukraine, according to the Russian defence ministry. The change follows the reported sacking earlier this week of the two Russian army commanders.

A Ukrainian counter-offensive has routed Russian troops in several places across south and eastern Ukraine in recent weeks, casting a gloomy cloud over Russia’s war.

Surovikin first gained notoriety as a general after ordering his troops to fire on pro-democracy protestors in the 1990s.

Surovikin has a shady past, serving time in prison twice for allegedly selling weapons and then leading a military column against protesters during the 1991 coup, which resulted in three deaths.

Charges against Surovikin over the deaths of anti-coup protestors were dropped as then-Russian leader Boris Yeltsin concluded he was only following orders.

Amid his support, the fortunes of the Syrian government changed and it was able to recapture 50% of the country from opposition forces.

According to military experts, Surovikin managed to turn the tide of the war in Syria, particularly through a controversial bombing campaign that inflicted a high toll on civilian populations.

He previously served in Tajikistan, Chechnya and Afghanistan.

Everywhere that Putin needed the most brutal, most criminal of commanders, he sent Surovikin. So it should be no surprise that the response to Ukraine’s taking down parts of the Kerch Strait Bridge was to target as many civilian targets and as much civilian infrastructure as possible.

In response to the overnight and early morning attacks, President Zelenskyy gave a very brief address this morning in Ukraine. Video and a machine translation into English of his remarks below:

“The morning is difficult. We are dealing with terrorists. Dozens of missiles, Iranian “Shahids”. They have two targets. Energy facilities – throughout the country. Kyiv region and Khmelnytskyi region, Lviv and Dnipro, Vinnytsia, Frankiv region, Zaporizhzhia, Sumy region, Kharkiv region, Zhytormyr region, Kirovohrad region, south. They want panic and chaos, they want to destroy our energy system. They are hopeless. The second target is people. Such a time and such targets were specially chosen to cause as much damage as possible. Stay in shelters today. Always follow the safety rules. And always remember: Ukraine was before this enemy appeared, Ukraine will be after him as well.” Address of Volodymyr Zelenskyi. 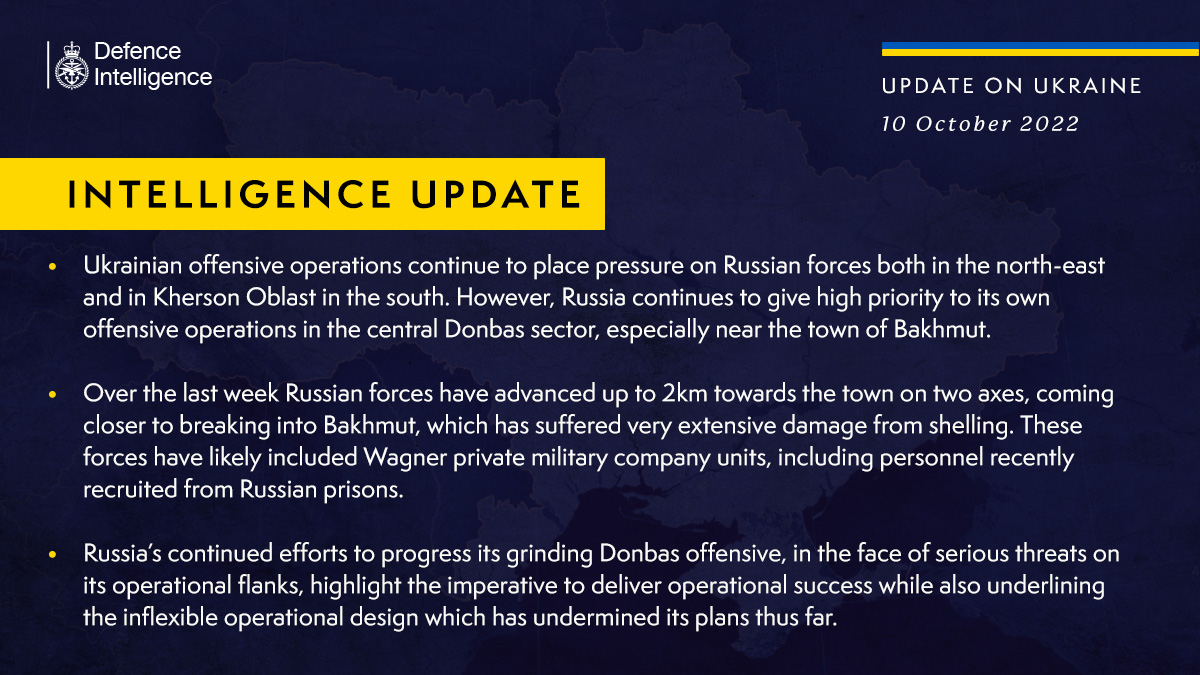 And here is former NAVDEVGRU Squadron Leader Chuck Pfarrer’s latest assessment of the situations in Kherson and Izium:

And an assessment of video and static imagery of the damage to the rail portion of the Kerch Straits Bridge:

MELTED TRACK: MAKS 22 @Maks_NAFO_FELLA has posted this video of damage to the rail bed, tracks and underlayment of the railway of the Kerch Straits bridge. The heat of burning tank cars has, in places, malformed the track; it's also likely to have weakened the bridge itself. https://t.co/b7tzcYJIzL

The commander-in-chief of the Ukrainian army, Valerii Zaluzhny, published a scheme of Russian strikes on Ukrainian territory on Monday morning.
"We are forced to repel these attacks using Soviet-era weapons, which we also have in insufficient quantities,” he said pic.twitter.com/zTMMX6wZfU

I just want to take a moment and focus on General Zaluzhnyi’s statement here. The Ukrainians actually intercepted over 50% of the inbound threats this morning. This is an amazing success ratio for their air defense. I know that’s cold comfort given how many missiles and rockets and kamikaze drones still made it through, but the Ukrainian air defense personnel did excellent work this morning! The real challenge is not only getting them more air defense equipment, but doing so to create a layered air defense. This is not my area of expertise, but setting up a highly effective air defense network over a city like Kyiv is not easy, nor is it a 100% guarantee that nothing gets through the net. Tyler Rogoway, who writes extensively on this topic, has an excellent, detailed, and very long thread on this. Here’s the first three tweets:

The cries for western air defenses around Ukrainian population centers will become much louder after today. Cruise missiles are a challenge though even for modern western air defense systems and if certain developments occur (more on this today), Patriot will be needed…

But people misunderstand what air defenses can and cannot do. They are not an impenetrable shield and must be layered for a greater degree of protection against diverse threats, especially at once. But if Russia will move to break the will of the people via long-range barrages…

Here’s some videos of the butcher’s bill.

WARNING, WARNING: SOME OF THE IMAGES IN THE VIDEOS IS DISTURBING!!!!!!

A Ukrainian Girl in Kyiv 🇺🇦 records a Russian missile strike 💥 near her while walking on the street pic.twitter.com/vYGW5XIhBa

Nothing indicates that you are a military impotent more than chaotic shelling of children's playgrounds as a response to a non-stop series of military defeats. pic.twitter.com/rYrS7hlfvD

My relative was in a cab 150 meters from the first explosions. Another person sent me this. He lives not far. It’s the very centre. It’s the university where I studied pic.twitter.com/5inaIZDE5k

Women of my country. Women like me. Don't look away pic.twitter.com/xYRhhYvveV

Russians, how are you feeling this morning? All good? Happy with your leadership? We’re relatively ok, but hate you even more today. pic.twitter.com/JY7LCvMQxy

The death toll reached 14 people, 90 wounded because of russian attack on Kyiv today.

Just the damage in Kyiv:

Russia has a limited supply of cruise missiles and it chose to use them en masse today to target a # of symbolic non-military targets. This may have been more for domestic consumption after the Crimean Bridge explosion than to try to coerce Ukrainians (which won't work) https://t.co/3BIgUtwlEb

Limited≠none. Russia still has cruise missiles, but its daily use of them dropped dramatically over the summer and early fall compared to the spring. That's part of the reason why they procured Geran-2 loitering munitions, which they are using on similar targets.

The bridge the Russians blew up is a pedestrian bridge linking a public park.

Ukr military source: “We were expecting it. Europeans should have been expecting it. It’s not February + out of blue. Where’s the reaction? Putin is looking for signal. Looking to see if someone will stand up + lead. Where is leadership? It’s as if people are waiting on Biden.”

Will you look at that, I have President Biden’s initial reply right here from the White House website.

The United States strongly condemns Russia’s missile strikes today across Ukraine, including in Kyiv. These attacks killed and injured civilians and destroyed targets with no military purpose. They once again demonstrate the utter brutality of Mr. Putin’s illegal war on the Ukrainian people.

These attacks only further reinforce our commitment to stand with the people of Ukraine for as long as it takes. Alongside our allies and partners, we will continue to impose costs on Russia for its aggression, hold Putin and Russia accountable for its atrocities and war crimes, and provide the support necessary for Ukrainian forces to defend their country and their freedom.

We again call on Russia to end this unprovoked aggression immediately and remove its troops from Ukraine.

I bet you can’t guess which of the useless American idiots that Russian state TV worked into their coverage of the Russian strikes against Ukrainian civilian targets?

Russian state TV showcases the latest strikes against Ukraine, seamlessly incorporating Donald Trump, Mike Pompeo & Elon Musk into their war propaganda. As for the "negotiations," it's been stated all along that Moscow seeks nothing less than Ukraine's unconditional capitulation. pic.twitter.com/dEq3RpyC9y

If you’re so inclined:

Ukraine stands and fights back!
We are crowdfunding money to purchase Ukrainian-made kamikaze drones!
Help us defeat russian terrorists and drive them out of our country!
Donate via
PayPal: [email protected]
IBAN: UA173052990000026008046715893 pic.twitter.com/2kT7h70pDE

Let’s finish the serious stuff with a message from Defense Minister Reznikov:

Our courage will never be destroyed by terrorist's missiles, even when they hit the heart of our capital. Nor will they shake the determination of our allies. The only thing they demolish irriversibly is the future of 🇷🇺 – a future of a globally despised rogue terrorist state.

Murder live. All of Ukraine. Now.

It will not scare us. Ukrainians will fight until the last breath of the last Ukrainian. https://t.co/xEgNYlkZqI

Also, if you’re so inclined:

Bretzel, the lion, from the "Natalya Popova and UAnimals Wild Animal Rescue Center" was injured during the shelling of Kyiv region. 💔
You can help him by using detail:
✔️PayPal: [email protected] pic.twitter.com/zWhov16vhW

There is no new video from Patron’s official TikTok as of right now. Hopefully we’ll get a new video tomorrow night.